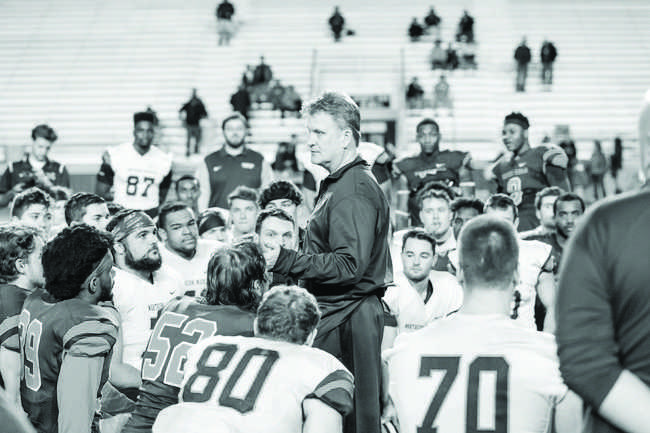 Head Coach Kyle Nystrom talks to his team after a hard-hitting day of practice.
Photo courtesy of NMU athletics

Even though the spring game was only an intersquad scrimmage, Head Coach Kyle Nystrom had his own way of viewing the match.

“Everyone says, ‘What’s a spring game all about?’ and everybody has their own different interpretations of it. But for us, it’s a celebration of spring football and practice,” Nystrom said.

Nystrom called the scrimmage a ‘long practice session,’ he was impressed by how his team composed themselves through the spring season.

“We do safeguard our players as much as we can. We do 12 running quarters and quicken the game [pace] up,” Nystrom said. “Maybe you don’t get in as many snaps and it’s not as drawn out as a normal game is, but we got our players out safe.”

NMU’s new Offensive Coordinator Dan Fodrocy, who comes up after serving eight seasons as an assistant coach at Saginaw Valley State University (SVSU), saw the game as a tool to focus on themselves before the actual season begins.

“I understand that I’m in charge of the offense, but I was really impressed by the way the kids played,” Fodrocy said on the scrimmage. “Offensively, I thought we moved the ball well and the defense made some good stops and that’s what you really want to see.”

Fodrocy also brought up the significance of having a new Offensive Line Coach and Running Game Coordinator, Pat Perles on staff. He replaced Jace Daniels, who left for the same position at Michigan Technological University. He hopes the adjustments can pay off in dividends.

“I feel confident about my experience and time in the GLIAC, but it’s really what comes down to what Northern Michigan can do on a daily basis,” Fodrocy said. “We are really going to focus on us, and that’s what I think will put us in a great position.”

In the simulated game that mostly showcased underclassmen talent, sophomore quarterback Ryan Johnson, who was out last season after suffering a season-ending injury in the season opener against McKendree University, said he was happy to be back out on the field playing.

“It feels great. We had a good spring ball season,” Johnson said. “Even though I got injured on the second play of the first game last season, it feels great to be out running with the [first team] and running with everybody.”

In a gritty, physical first half, freshman kicker Daniel Riser scored the half’s only points on a field goal with four minutes remaining in the second quarter. Freshman quarterback Jason Pridgeon attempted a hail mary pass, but it was incomplete to sophomore wideout Cullen Heimburger. The game would remain deadlocked at 3-0 heading into halftime.

The second half saw a few highlights as Johnson found a wide open redshirt-freshman wide receiver Isaiah Popp for a touchdown, followed by a Riser extra point to make it 10-0. Freshman defensive back Tyler Geiman had a near-interception to close out the third quarter for the Gold team, but the ball fell harmlessly to the ground.

The fourth quarter started off strong for the Green team, as Pridgeon connected with redshirt-freshman wide receiver Duane Jackson for a touchdown, with Riser’s extra point extending its lead to 17-0. Riser made his second field goal of the game with 8:40 left, but an interception from sophomore defensive back Demarious Wright halted the rally. The offense had a chance to add more points in the waning minutes, but an incomplete pass to Heimburger finalized the score at 20-0.

Throughout the game, Johnson said he and Fodrocy were meshing well on the offensive side of the ball.

“He’s focused on the little things like ball security, being locked into the game and just staying locked in on the playbook,” Johnson said.

In the offseason, the team added 28 National Signing Day recruits to the team. Six of those recruits are from the Upper Peninsula.

As the spring football season concludes for NMU, Nystrom said the spring game will be used as an aid for their first game in the fall.

“Here’s my goal right now, and that’s to beat McKendree,” Nystrom said. “We didn’t do well down there the last time when we opened up the season, so I’m not talking anything besides what we can do to get better at everyday for it.”

The Wildcats begin its 2019 Fall season at home facing off against the McKendree University Bearcats at 1 p.m. on Saturday, Sept. 7.