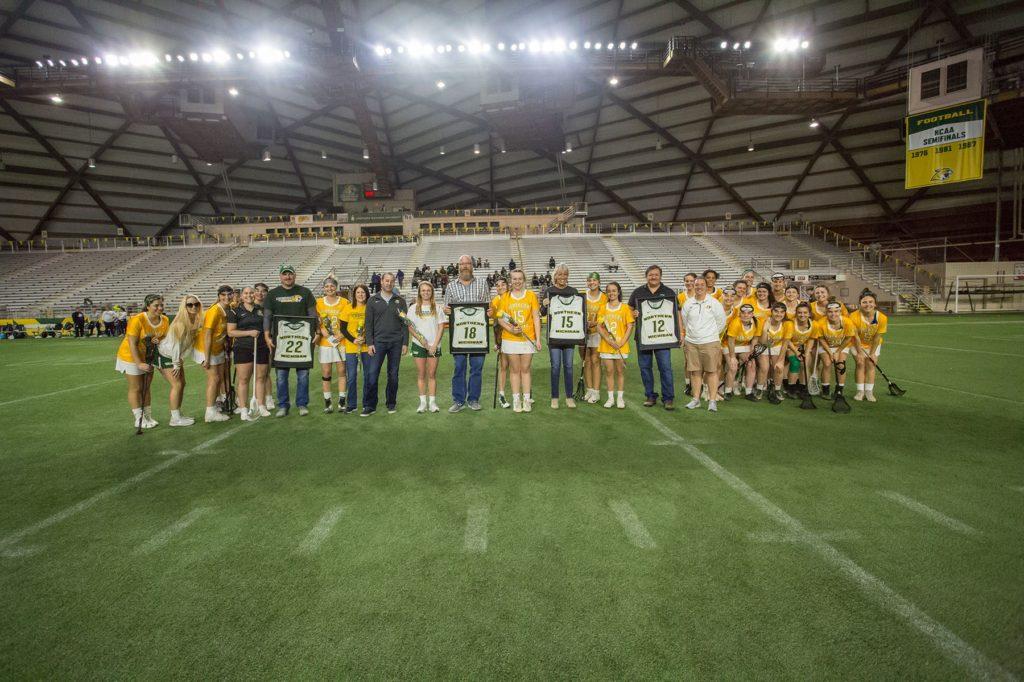 It took three seasons, but the Northern Michigan University Women’s Lacrosse team has finally punched its ticket to the GLIAC Conference Tournament.

The Wildcats did so in a dramatic, do-or-die matchup against the Ashland University (AU) Eagles on Senior Day, winning in decisive fashion, 24-6.

The road to the tournament was a journey every step of the way, with highs and lows throughout the season. The ’Cats started the season with a win over the Albion College Britons before dropping its next six games, including a few close matchups.

A roadtrip to face Maryville (MO) University finally swung in favor for the ’Cats, who snapped its losing streak to swing the momentum of its season. In the next game against Lewis University, NMU picked up another victory and found itself on its first winning streak of the season.

At this point in the season, fatigue began to set in with a tough slate of matchups when nationally ranked programs Grand Valley State University (GVSU) and Indianapolis University (IU), beat up on the young Wildcats as the entirety of the season would come down to the final game.

The Wildcats celebrated the careers of its four seniors on the roster: attacker/midfielder Megan Palacio, defensemen Tori Aidif and Amanda Robers and attacker Casey Marshall.

NMU came into the matchup tied for sixth place with the Eagles, with only the top six teams in the conference earning an invitation to the tournament. A loss to AU would result in the end of NMU’s season.

The first half woes that seemed to plague the Wildcats in the second half of its season were just a faded memory for the team as it collectively exploded for 15 goals before halftime.
Junior midfielder Graison Ringlever kicked off the scoring less than a minute into the contest on a free position shot. The Eagles quickly responded, drawing the score even less than a minute later.

The Wildcats opened a quick flow of goals shortly after, with freshman attack/midfielder Emily Renfrew scoring, followed by two more goals from fellow freshman midfielder Jessica Daniels. Ringlever added to her goal total with two more, and just like that, NMU held a 6-1 advantage.
AU scored again to bring the score closer, but sophomore attack/midfielder Tess Kostelec brought the lead back up to five after scoring on a free position shot.

An unfamiliar Wildcat found her way onto the scoresheet, with freshman midfielder Katie Zarembski scoring her first career goal in an NMU uniform.

The Eagles bumped their goal total to three but another Renfrew tally would quell the AU attack. Palacio scored on a free position shot 12 seconds before the end of the half to enhance her senior day excitement and the ’Cats would head to the locker room in command of a 15-4 score.

The start of the second half saw the Wildcats pounce on the Eagles, jetting off to another fast start, thanks in part to more goals from Daniels, Renfrew and Ringlever within the first 10 minutes of the half. Ringlever scored again on a free position shot just minutes later to lead the team in goals for the day with seven.

Another Wildcat found the back of the net for her first goal of the season, attacker Emma Brotemarkle, with an assist coming from sophomore midfielder Bianca Kinder.

In the end, the Wildcat offense was too much for an Eagles team that was unable to take flight in the match, with NMU running away with a 24-6 victory and punching its ticket to the GLIAC Tournament.

Renfrew and Daniels each picked up three goals along the way with Kostelec and Zarembski each contributing two. Kinder led the team with four assists and freshman goaltender Cam Stilson notched five saves along the way.

The Wildcats are coming into the tournament playoffs with confidence after its beatdown of AU and will face off against the McKendree University (MU) Bearcats. In its only matchup this season against the Bearcats, NMU dropped the contest 22-3 and is looking to avenge that loss.

IU finished the regular season with an unblemished 11-0 record and has the top seed entering the tournament, followed by the GVSU Lakers with an 8-1 record.

The winner of the NMU versus MU matchup will meet the Lakers in the conference semifinals.
Gametime against the Bearcats is slated for Tuesday, April 30, from MU’s campus.