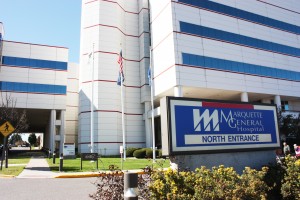 Veridea Group hopes to acquire the now vacant property of the Marquette General Hospital, located on College Avenue at the edge of NMU’s campus. (NW archives)

Veridea Group, a Marquette-based company which specializes in real estate development and hotel management, has expressed intent to acquire the UP Health System (UPHS) Marquette General Hospital which sits at the edge of NMU’s campus on College Avenue.

The company announced their intent to purchase this property on Dec. 7, 2019. Closure of the transaction is set to be finalized during 2019, with redevelopment beginning soon after. The hospital itself will be relocated to a new downtown facility built by the Veridea Group.

According to the Veridea Group’s website, this agreement has taken two years to bring to fruition. When the decision for the old hospital to be relocated came through in 2015, the fate of the property was left a mystery.

Now that 21-acre parcel of land, which includes 14 health care facilities containing almost 900,000 square feet of infrastructure as well as several single-family residences and vacant lots in the surrounding neighborhood, has been definitively fated for redevelopment.

The UPHS hospital has been an important part of the Marquette community since the beginning of its use in 1915, and the Veridea Group has expressed a willingness to take this into account as it redevelops the area.

Robert Mahaney, President of the Veridea Group, co-founder and current Board Chair of Invest UP and member of NMU’s Board of Trustees since 2015, stated this project will provide “transformative growth” which will “meet a number of community and neighborhood needs,” according to the group’s
website.

“As residents of Marquette, we appreciate how important the current hospital campus is to the city and especially the surrounding neighborhoods. We feel very strongly that this area cannot remain vacant and that redevelopment needs to happen quickly, led by a team that understands our community’s unique challenges and opportunities” Mahaney said, according to a press release.

Mahaney declined to comment to The North Wind, as did Victor Harrington, regional director of marketing and business development for UPHS.
Karyn Olsson, the Veridea Group’s public relations representative, said that the project is still in its due diligence phase, during which the Veridea Group must complete a comprehensive appraisal before officiating the purchase, and she also declined to comment further at this time.

The redevelopment intentions for the hospital complex include fixing up of the single-family homes, demolishing many of the old, obsolete structures of the medical campus, and “construction of office, residential, retail, lodging and extensive public spaces,” according to a press release.

The new developments are intended to be well-integrated with NMU’s nearby campus and with the surrounding neighborhoods of greater Marquette.

The Veridea Group, which was founded in Marquette and is headed by Mahaney and his wife, has completed projects valued at $300 million, according to the group’s website.

Set to originally open in the spring, the new hospital, located at 850 W. Baraga Ave. on the former Roundhouse Property, opened on June 2 and is offering tours for prospective parents who intend to deliver babies there in June.