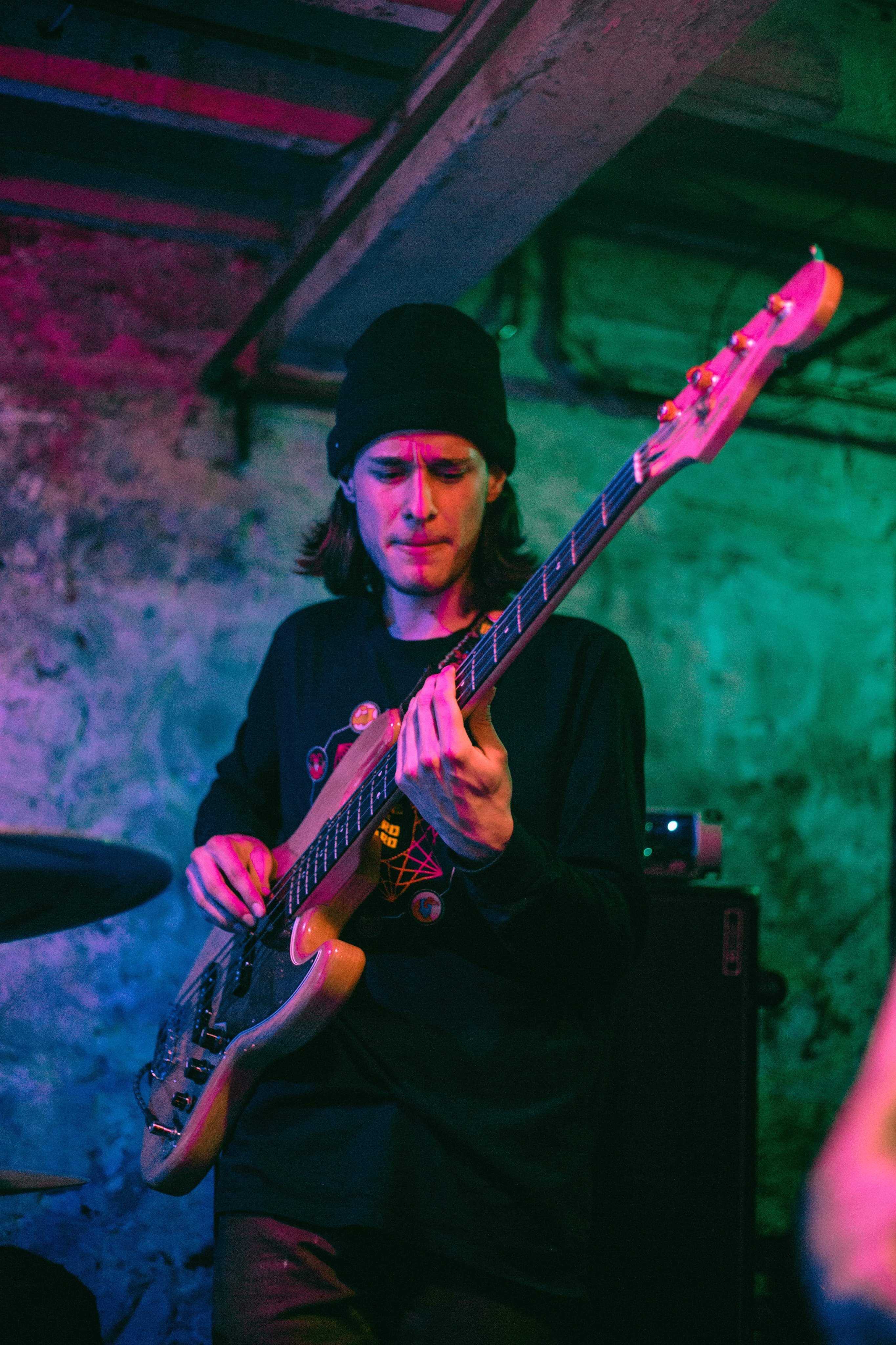 Saturday night rolls around and people come
funneling down Front Street into a two-story home
dubbed the Mildred House. Carraled from a line
outside the door overflowing into the kitchen, people are
shoulder-to-shoulder packed like sardines all throughout
the house with high energy awaiting the next set to start
downstairs.

Senior graphic design major Michael Wilson, senior
English education major Trevor Shanahan, Jacob Darner
and their two other roommates opened their home as a
place for people to come together through art and music.
Near the beginning of last semester, a typical night of hosting
bands in their basement usually entailed a line out the
door and a crowded house.

“I don’t think any of us expected that it would actually
blossom that much,” Shanahan said.

The house wasn’t always such a popular venue frequented
by the public. It began a lot smaller and contained.
“We’re all musicians in the house and we’re friends with
a lot of musicians so there’s several times that we had a
lot of people over and we were all playing music and we
obviously jam like everyday,” Wilson said.

Roommates Wilson, Shanahan and Darner had gone
to similar venues themselves when they were younger students
and were inspired to open up their own home to give
it a try.

“We kind of carried the torch from lots of people that
came before us in other places in town just doing the whole
DIY spot thing,” Wilson said.

Wilson spearheaded the operation, but all five of the
roommates living in the leased house were willing to take
risks to see what they could accomplish.

“I knew as soon as I was getting out of the dorms that
I wanted to contribute to the local music scene as much
as possible and I thought that if I could have that stuff
going on in my own home, all the greater,” Wilson said.

“I thought there was some pros and cons to that, that’s for
sure, but mostly I was just super excited for art and creative
stuff to be going on in the house. I had been inspired by
all the people that had taken me in my younger years here
and invited bands into their homes to play music.”

Darner had spent many of his teen years in Marquette
before attending school here for photography.

“My freshman year, at least, there was always somewhere,
some house that was having something and then I
definitely noticed before we moved into Mildred that that
had definitely gone down so it’s just like making it available
again like we had it,” Darner said.

The first official show that was advertised took place on
June 16, 2018 showcasing a friends band, Eight Carl. Wilson
later created a logo for their DIY venue to establish an
icon and get the word out to students by posting it around
campus, and the name Mildred House drew curiosity.

“Mildred comes from the name what’s written on our
wheelchair,” Shanahan said. “It came from a hospital in
Traverse City on the side it says, ‘Mildred Marilla’ so it
belonged to a Mildred, but now it belongs to us. This is
Mildred’s house.”

Bands traveling from as far as Colorado would make
stops at Mildred House often from a variety of genres.

“One of the last bands we had was a band from Milwaukee
that had two guys, a drum and bass duo name Nasty
Boys and they were both male strippers at their day job
and they incorporate that in their set and needless to say it
was super entertaining,” Wilson said.

Wilson often sought out bands to play at their venue, but
to his surprise his best luck was when people sought them
out either through referrals by friends or word of mouth.

“I wanted to make it seem like anybody that had musical
aspirations was welcome to express themselves at our
house and I think people mistake DIY for Punk, but we’ve
had such a wide variety of musicians play at our house
before,” Wilson said. “That’s one of the things I’m proud
of is the diversity for sure and with that came a widespread
of people from far away.”

The variety of music and diff erent atmospheres diff erent
people brought is what made Mildred unique in their own
way.

To keep it reasonable for bands to take their time and
maybe make a detour to stop at Mildred, Wilson would
ask for the help of the community coming to see the shows.

“From the very beginning I did at least ask for donations
and that’s how it started,” Wilson said. “It started
as a way to get money for the traveling bands and then
the more people that were strangers that came, the more
persistent I became about asking them. On top of just the
fact of me trying to capitalize on a situation to help out the
bands working to bring us music. It eventually turned into
an attempt to deter people that weren’t there to watch the
music.”

Inviting musicians from afar to come to their home came
with some courtesies. The house mates often did whatever
they could to make sure the bands felt welcome and prepared
as well as opening their home for some of the bands
to sleep at.

“It’s another courtesy we gave to the bands as thanks for
bringing music into our home and that’s kind of standard
as far as DIY scenes go,” Wilson said. “I wouldn’t say anyone
ever really expect it, usually people are humble and
gracious about it, it’s like an unspoken code.”

As shows started to get really packed the house members
recalled times when people would pay just to sit in the living
room or stand in the kitchen.

“Essentially why we had to effectively shut down was
because the fire department said on many cases it’s illegal
and unsafe,” Wilson said. “I never really felt like I was in
danger ever, even if it was pretty packed in there.”

Eventually, the Mildred guys realized what they were
doing could be a potential fi re hazard after an amp started
smoking one night. In that case, no one was injured and
the show went on. What became a more prominent issue
was people being disrespectful to the neighbors property
and their own.

“People were littering in his yard and stuff , that’s obviously
not cool,” Darner said. “That was part of it too, we
started patrolling outside cleaning up outside directly after
the party.”

Simply they couldn’t prevent everyone’s actions and had
no way of making the events more quiet.

“A lot of it I did feel was out of our control, it’s people
leaving our house and once they leave our house there’s
not much we can do about it,” Wilson said. “The best
thing we can do about it is just remind people constantly
and make sure we’re kicking out people that are being belligerent
and rude.”

During the last couple shows the cops started coming
about every time they were throwing, which often kept a
lot of bands from playing, frustrating the musicians and
the hosts.

“We definitely just got complacent on a lot of issues so
when it all kind of came to a head and was brought to our
attention it was really too late to do any sort of damage
control,” Darner said.

Due to legal reasons the house can no longer be open to
the public for shows, the housemates will continue to keep
a creative space at Mildred House.

“We’re all musicians, no one can do anything to stop us
from playing music in our own home,” Wilson said. “Of
course that extends to our friends and family and the people
we care about contribute to that so there’s always going
to be people playing music and coming into our home.”

As the founders of Mildred house reminisced about
their year of creative escapades they consider what made
their venue such a popular location.

“I think one of the things people pay for, people basically
do anything for, is human connection one way or another,
whether it’s connecting with someone through art
or physically being in the same space as them there’s not
really a price that you can put on that,” Wilson said.

Shanahan added that people could really be themselves
in the type of atmosphere they created with the music
came dancing.

“Also, you don’t really know who someone is until you
catch them in a mosh,” Shanahan said.

Some of their favorite things they encountered from establishing
Mildred House was meeting new people, experiencing
new music, getting out of their comfort zones and
the thrill of not knowing what could happen on any given
show night.