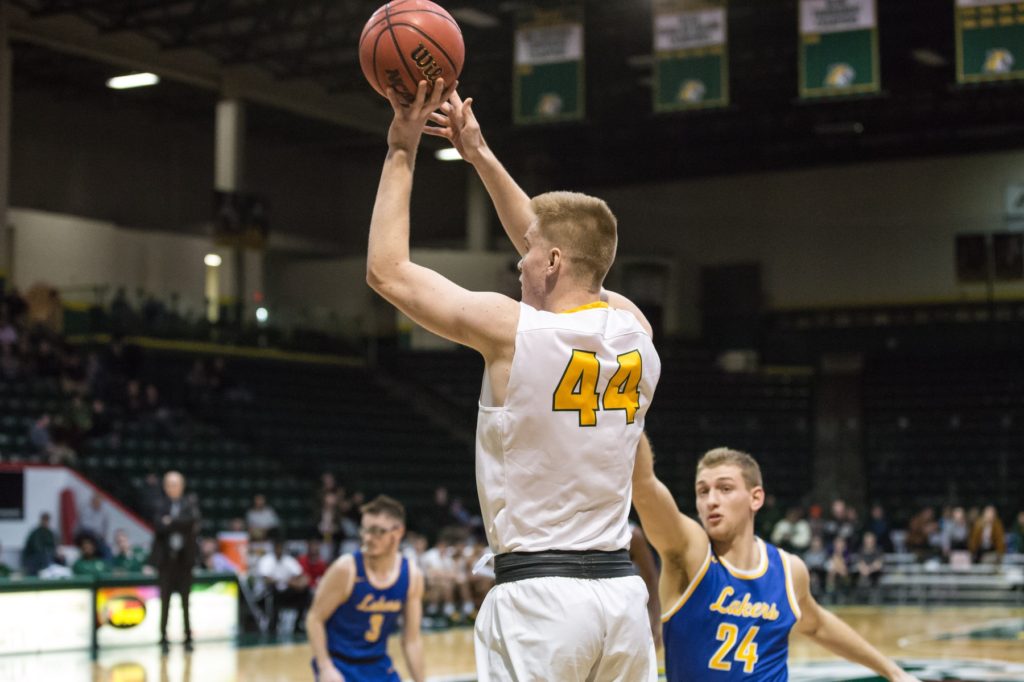 Troy Summers attempts a 3-pointer in a home game vs. Lake Superior State University a year ago. Photo courtesy of NMU Athletics

Once Northern Michigan University (NMU) Head Men’s basketball coach Bill Sall decided to return to his alma mater, Calvin College, to begin his new tenure there; NMU was left with a coaching opening of their own. On June 26, Matt Majkrzak was hired to become the 15th NMU Head Men’s basketball coach in program history after serving as the head coach of Bryant-Stratton College, a junior college out of Milwaukee. Growing up only 4 hours away, this was a job he always saw himself wanting.

“Northern Michigan’s a program that I’ve known for a while and have a lot of respect for,” Majkrzak said. “Being from originally four hours away, it’s something that I’ve been able to follow closely over my coaching career; it was definitely a place that I always knew that if it was open, it would be a place where I’d love to coach and continue my career.”

Coach Majkrzak’s great feeling about NMU is what made him really want the job, but even he was surprised about how much he would enjoy Marquette.

“It’s been great, I had high expectations but I’ve been pleasantly surprised with how high-level everything involved in athletics and the school has been,” Majkrzak said. “It feels like a place that has that big-time college atmosphere, both for athletes and students.”

Sall brought success to NMU basketball in his six seasons here, including two GLIAC Tournament berths, and a quarterfinal win over defending national champion Ferris State University a season ago. Majkrzak comes into his first season aware of the foundation that was set here, however, he wants to expand on that success and get NMU back to the national tournament for the first time since 2000.

“I think Coach Sall and the group of kids they’ve had over the last few years have built a program where they went from a few down years to having two good years the past two years,” Majkrzak said. “I think our challenge is to build off being good and try to take that next step to be great. Rather than just making the conference tournament and winning a game there, [we want to] put ourselves in position to win the conference and maybe to make a run in the national tournament, that’s kind of the goal to build off of the previous success and take it maybe one notch higher.”

The Wildcats lost two All-GLIAC players in Naba Echols and Isaiah Johnson, as well as Ian Hodges who transferred to William Woods University. However, the ’Cats are expected to return 12 players from last year’s team, and Majkrzak knows what that means for his team.

“We return a lot of guys that have played a lot of minutes, which is always a good starting point,” Majkrzak said. “We have a lot of good players returning, but I’m trying not to put much expectation when it comes to a win-loss stance on this year’s team as I get to know everyone. I know we got a lot of guys returning and a lot of guys who are proven winners in this league; it’s going to be about how quickly we come together as a group.”

The team had their first meeting on Sunday, Aug. 25, and this is just the beginning of building player-coach relationships for Majkrzak. It is something that is very important in the grand scheme of college basketball, and since NCAA rules haven’t allowed him to watch his players much in the gym, Majkrzak has attempted to work around it and get to know his players.

“I haven’t been able to watch them play at all due to NCAA rules, we’re not allowed to see anything, but I’ve watched a lot of film on last years’ games and tried to get an idea who they are as players,” Majkrzak said. “I’ve gotten to meet them a little bit as people, which I think right now is the most important thing, just building that one on one relationship.”

Coming from the junior college level, Majkrzak knows of both the differences and similarities of advancing to the Division II level.

“I think the biggest thing is that both levels have scholarships, so in a lot of ways, the recruiting hasn’t changed too radically. But the difference is now I get to have guys here for four years and coach kids that are older and more experienced,” Majkrzak said. “The junior college level was great to learn how to teach because you were dealing with all freshmen but this level I think you can rely a little bit more on that senior and junior leadership, which I think we have a pretty good group of.”

Along with Majkrzak being excited about his returning group of players, the Wildcats have an incoming freshman class of five players including reigning Upper Peninsula Dream Team point guard Reece Castor from Gladstone, who averaged 22.7 points per game and 5.7 assists per game in his senior campaign.

“I’m really excited about the recruiting class, I think it’s five guys that fit what we do and are perfect fits for our system but also just the school as a whole,” Majkrzak said. “Reece Castor was the kid from Gladstone that coach Sall had brought in, and he was one of the better players in the Upper Peninsula in the last few years. He had a lot of options and obviously we’re really excited to bring in a local guy that we think has a chance to be really good.”

Along with Castor, Majkrzak was fortunate to be able to get four of his own recruits in from Wisconsin for this year’s squad. They include Xzavier Jones (Greendale, Wis.), AJ Makinen (Muskego, Wis.), Justin Kuehl (Hustisford, Wis.), and Noah Parcher (La Crosse, Wis.)

“With that, we were also able to bring in four kids from Wisconsin that I was pretty familiar with, and you don’t always get the chance to bring in guys you knew when you take over a program,” Majkrzak said. “So I felt fortunate with the timing, that we were able to between that timing and some of my previous junior college connections, we were able to fill our roster out with really good student-athletes.”

Coach Majkrzak will get all the time he desires to find out more about his team, as the Wildcats open up the first season of the Majkrzak era, when they travel to Lebanon, Illinois on Nov. 9, as they take part in the GLIAC/GLVC Challenge against the Lewis University Flyers.