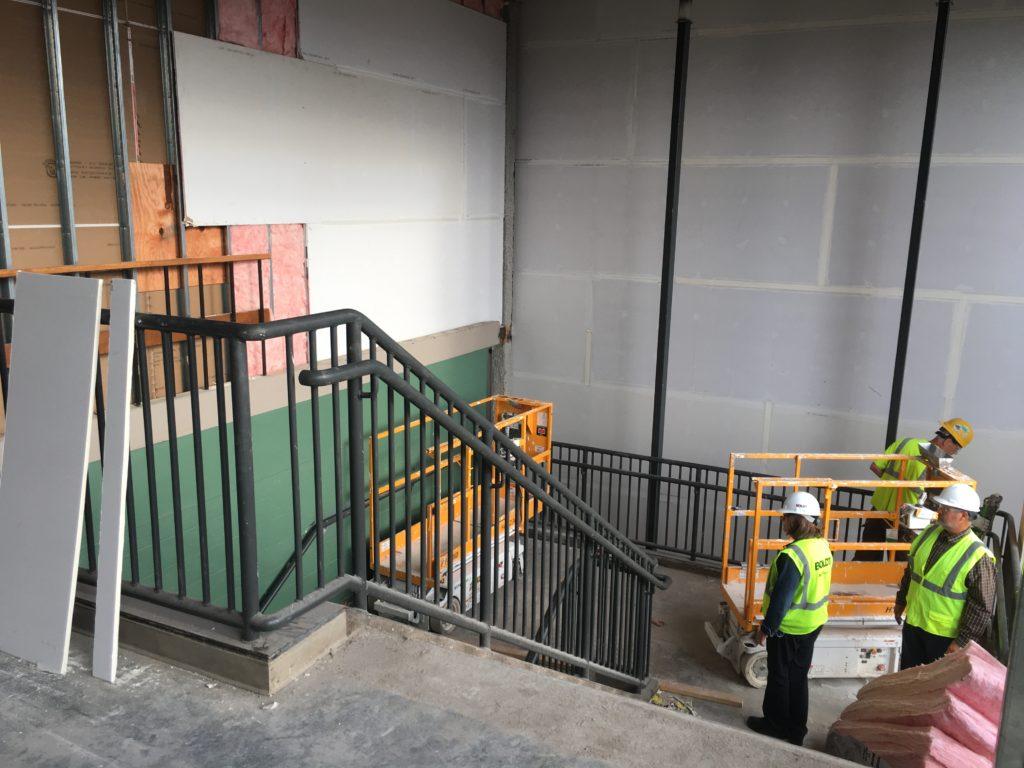 STILL RENOVATING—Construction workers continue on phase two reconfiguring and remodeling the rest of the existing University Space, with hopes of completion by Sept. 19. (Akasha Khalsa/NW)

The long-awaited, new and improved University Center (UC), which will soon be called the Northern Center (NC), is continuing phase two of its construction and hoping to display the new facility on Sept. 19.

This ongoing remodeling and construction is a three-phase project, with the first phase including the bookstore, ballroom and pre-function spaces, such as the large hallways outside the bookstore and ballrooms. These sections of the NC have been completed and have already come into use by students and the university. The bookstore, where students may now retrieve their class materials and NMU apparel, moved back into its rightful place this summer in April, according to Tom Helgren, director of NMU Auxiliary Services.

Above the bookstore are four new ballrooms which can be used separately or as one grand ballroom for conferences, weddings, student concerts or a variety of other events. One of the first events held in this space was a high school prom, hosted during May.

“This is brand new space,” Helgren said. “What they did is from the roof decking of the bookstore. This used to be called the explorer wing [which] was demo’d, and then this second floor was rebuilt and expanded. The old space only had ceilings of 9 feet, 6 inches. This has a ceiling of 18 feet, and all built in audio-visual, and all LED lighting.”

“It will open up some great opportunities for larger student events in the facility” Helgren said.

With the larger spaces, events such as the Student Leader Recognition Banquet will be able to accommodate more people. This new space also comes with a great deal of parking, something dear to every NMU student’s heart. The front 152 parking spaces of the NC is guest and 2-hour student parking, while West Hall’s old parking on the side of the building has been taken for use as mixed faculty, staff, and visitor parking.

Phase two of the construction involves a reconfiguration and remodelling of the existing UC space. The Great Lakes Rooms and Charcoal Room, several meeting rooms as well as the downstairs area, which will have places for student enrichment and entertainment, are all parts of this phase of the renovation.

The downstairs space will include a pub which will be called the Wildcat Den. It can be easily accessed near the bookstore and will include three dart alleys, a quiet soft-seating area, pool tables, shuffle boards, a video-gaming area, an open kitchen with a woodstone oven and an open ceiling intended to give an industrial look.

“The intent is to create a student activity zone,” Helgren said.

The gaming area will be furnished with couches and soft seating, and students will be able to bring their own consoles to plug in and play. Mounted TVs will broadcast live sporting events or other events that students want to see.

A selection of popular Starbucks drinks will be served, along with sandwiches, salads and a menu based on items that were tested out last year. As a restaurant, this space will be accessible to all students, faculty, staff and community members.

“I think there’s a real need on this campus for students to have a place for poetry readings, a coffee-house-like atmosphere, local bands, things of that nature,” NMU Dining Services Marketing Manager Marina Dupler said.

Rather than serving alcoholic beverages at first, the pub will begin by serving mocktails.

“Right now we’re still working with the Michigan Liquour Control commission on securing the license, so we will not be starting with alcoholic beverages to begin with. That’s to come,” Dupler said.

Many popular student organizations have been moved to the front of the NC near the Wildcat Den, including the Center for Student Enrichment, the Student Leader Fellowship Program, the alumni center, the volunteer center and programming.

Upstairs, the Great Lakes Rooms are being reworked. There are three small meetings rooms with seating capacities ranging from 15 to 75 people, each including monitors with plug-and-play features for presentations. An office space has been converted into the executive conference room with behind the scenes service. High profile events are planned to be conducted in this space.

Phase three of the construction will add a veteran’s lounge in the back of the NC when the center for students enrichment vacates. This center should open in October of this year.