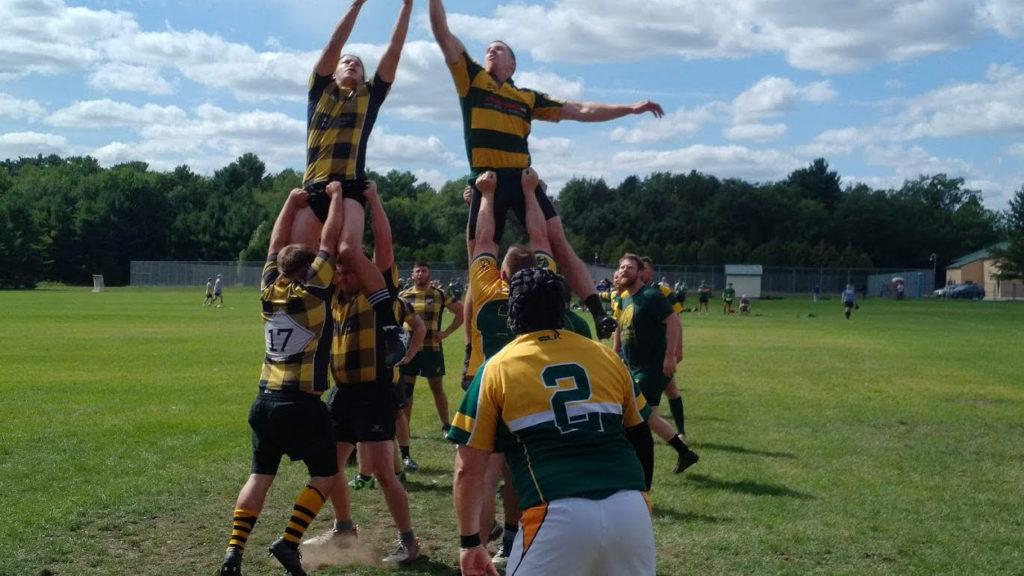 A green fresh-cut field set the pace for a bloody scrimmage.
A battle with no helmets, no weapons, only burly
arms, shredded quadriceps, a quanco and a whole lot of
Wildcat vigor would stand the test.

NMU alumni, families, students and community members
huddled along the fence of Wright Street Field on
Saturday, Aug. 31, to commemorate the 40th Reunion of
NMU’s Rugby Team. What started back in 1979 as a small
men’s rugby club has grown into a network of passionate
alumni rallying together to preserve a legacy.

The reunion began with a celebration honouring Lt.
Col. Tom Wilson, a NMU alumnus and former Mooseman
(1st 2nd-row) who played from 1982 to 1986, who has
Amyotrophic Lateral Sclerosis (ALS), commonly known as
Lou Gherig’s disease. Steve Nemeckay, a former teammate
of Wilson reflected on their time spent playing together.

“I can say he was as tough as nails on the pitch and a
great guy off the pitch,” Nemeckay said.

The NMU Reserve Officer Training Corps performed
a presentation of colors. The ceremony ended with a jersey
retirement, honoring Wilson’s time on the team and
bright red bracelets were passed out with the words “raise
your voice” inscribed, intended to inspire those to speak up
about ALS awareness. Wilson has attended U.S. Congress
meetings, regarding funding for ALS research and continues
to fight for a cure.

NMU alumnus and former Moosemen Chuck Delpler
travelled all the way from Ireland to be apart of this special
event. Delpler came to NMU in 1983 to begin the revival
of the Moosemen team, his goal was to teach the basics
of rugby to this ragtag group, having played previously at
Michigan State University. Delpler describes the creation
of the Moosemen as their mascot.

The team had a rough start losing most games; however,
as they grew they became more powerful and were able to
showcase themselves as a team to be reckoned with. Presently,
Depler still enjoys watching rugby, and was thrilled
to be back at the reunion.

“It’s nice to see these generations, especially to see the
guys from the original team,” Depler said.

The “old boys” are reluctant to share stories from their
wild past with many “pleading the fifth,” and others saying
it would just take too long to share, its representative
of the close-knit brotherhood that these players developed
whilst playing together. Nevertheless, Dave Sikkelee who
played from 1986 to 1992 did share his experience of being
a Mooseman.

“If you think about it, we grew up together at a very
pivotal time in our young lives all those years ago,” Sikkelee
said. “Training, playing and the social aspect of it
created a bond that has lasted all this time. It’s exciting to
see them, their families and friends after all these years and
learn about what they have been doing since the last time
we saw each other.”

Brotherhood is a word you will hear a lot from the
Moosemen. To them, rugby is more than a sport, it is a
lifestyle and they hope that it continues at NMU for many
more generations.

Nemeckay was one of the coordinators for the reunion,
having been a Moosemen himself from 1985 to 1990. His
main goal from these events is to set up an endowment for
future rugby players.

“[NMU alumni] Jeramy Katchuba, Nate DeDamos
and myself worked with [captain] Noah Martin and head
coach Jordan Buss starting last fall to bring the weekend together,”
Nemeckay said. “It is great connecting with players
from all the eras of Moosmen rugby and helping build
upon the traditions of the past to help create new ones.”

The alumni aim to create a scholarship for future rugby
players to continue the legacy of the Moosemen, according
to alumnus Karl Barr.

“Much like the fact that no team can win just based on
only a few individual efforts, success is due to the efforts of
the entire team,” Barr said.

The earnings of this endowment will be used for team
expenses, as it continues to grow and develop the alumni
hope that it will get large enough to cover tuition, at that
point they will develop criteria for the scholarship.

“The Alumni from the Men’s Rugby Team pledged of
over $22,000 to fund an endowment that will support and
advance the team in perpetuity,” Barr said.

The team must raise a minimum of $25,000 for the
endowment to take effect and is continuing its efforts to
campaign for funds. NMU alumnus Tom Aepelbacher
who played from 1982 to 1986 hopes the legacy fund will
succeed.

“It’s surreal. When you leave campus in a club sport you
don’t know if it’s going to continue,” Aepelbacher said.
“It’s based on the participants, not on the school, so here
we are 40 years later of handoff s, it’s incredible.”

This is something that will not only ensure the future of
the Moosemen but the promise that these men are more
than a team, they are a brotherhood that will support one
another in reaching beyond their goals into the future.

The first game of the day was the University of Minnesota
Duluth versus NMU ended in a 65-19 defeat, however,
the team remained strong. Then it was time for the “old
boys” to take over in their reunion game against Michigan
Tech. Children cheered on the sidelines for their dads,
wearing vintage rugby shirts and teammates rallying for
each other as if time had stood still.

“Getting to hang out with guys half my age, and trading
stories of what we used to do, this weekend is all about
building that bond,” Nemeckay said.

This is a tradition that will hopefully live on and grow
through generations, with so many people holding it so
close to their heart, it can only grow stronger.

“Meeting my old friends and sharing the old stories, seeing
that the club is still going strong gives me a sense of
pride that myself and the former players contributed to the
club going strong for so many years,” Sickkelle said.