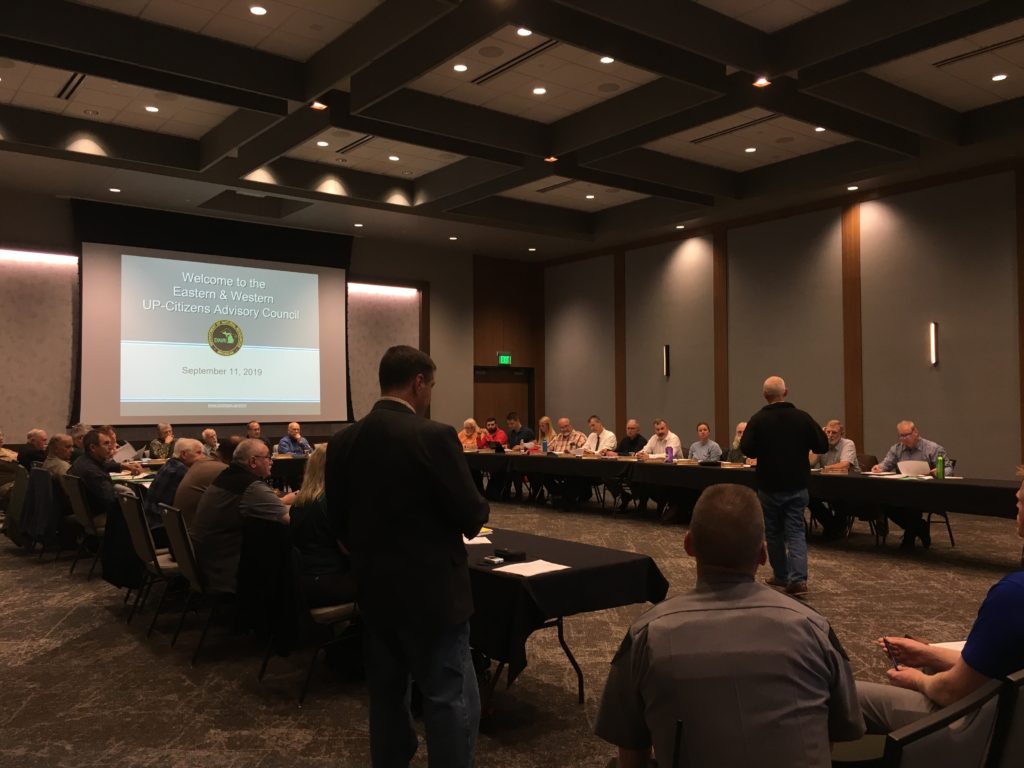 Michigan’s Department of Natural Resources (DNR) held a meeting Wednesday afternoon on NMU’s campus to discuss issues pertaining to the recent activities of the DNR in Michigan’s Upper Peninsula.

The joint meeting included the DNR’s Eastern and Western Upper Peninsula Citizen Advisory Councils, which took place in Ballroom I in the Northern Center. During this meeting, officials, independent citizens, and citizen representatives of various outdoor recreation interest groups expressed their concerns. The group functions to help the DNR become more effective by providing guidance and has been functioning for 12 years.

In doing so, however, these citizens walk a fine line.

“You don’t want to become an apologist or an extension of the DNR, because then the public looks askance at you…We have to be constructive critics,” Chairmen of the Eastern U.P. Citizen’s Advisory Council Tom Buckingham said.

Groups represented in the Citizen Advisory Council included conservation organizations, equestrian trails, the Snowmobile and ORV association, the Michigan Association of Timbermen, veterans, the Trapping Association of Michigan and various sportsmen’s clubs. Their ambassadors came together to receive updates from the DNR officials present and to pose questions.

The meeting included updates from DNR staff members in various divisions. Several of these, complained of an inability to hire and retain employees, especially in their more remote forest locations such as Tahquamenon Falls. Part of this issue related to low wages for these employees, which are barely above minimum wage. One council member worried that these wages are often much lower than prices advertised by fast food companies. State parks have lost employees to Target because of low wages.

Rumors of cuts in law enforcement staff and wildlife representatives were also addressed.

The Fisheries Division reported an increase in Chinook salmon deposited into the Great Lakes this year. Yet they were criticized by council member Jim Baker for being a 100,000 fingerlings short in their stocking of the northern lakes.

“We gotta do better if we can,” Baker said.

Forest Resources, a division of the DNR, provided an update focusing on changes in staffing and the complexity of their function.

“It’s hard to explain how busy our officers are. We wear a lot of different hats,” District Lieutenant for Marquette West Ryan Aho said. “We’re protecting resources, educating people on invasive species, teaching, we’ve got guys who are responding to suicidal people who have shot themselves, capsized vessels… it’s hard to sit here and explain.”

The division is facing shortages of Conservation Officers (COs) Their longest-serving veteran has been employed for only nine years, and most people only stay on board for two to three years. This year, five new COs have come on board, but as of two weeks ago, their total COs have been cut back.

After updates from these divisions, the Commercial Fishing Statute was addressed and explained to the citizen council. Michigan’s fishing regulation was criticized harshly by DNR employees for being contradictory, archaic and confusing.

Other issues addressed included Chronic Wasting Disease regulations overview and the budget for the Parks and Recreation Division.

On Thursday, another DNR meeting, the Michigan Natural Resources Commission will take place at 10:30 a.m. in the Ballroom of the Northern Center.