Wildcats pounce past McKendree in opener 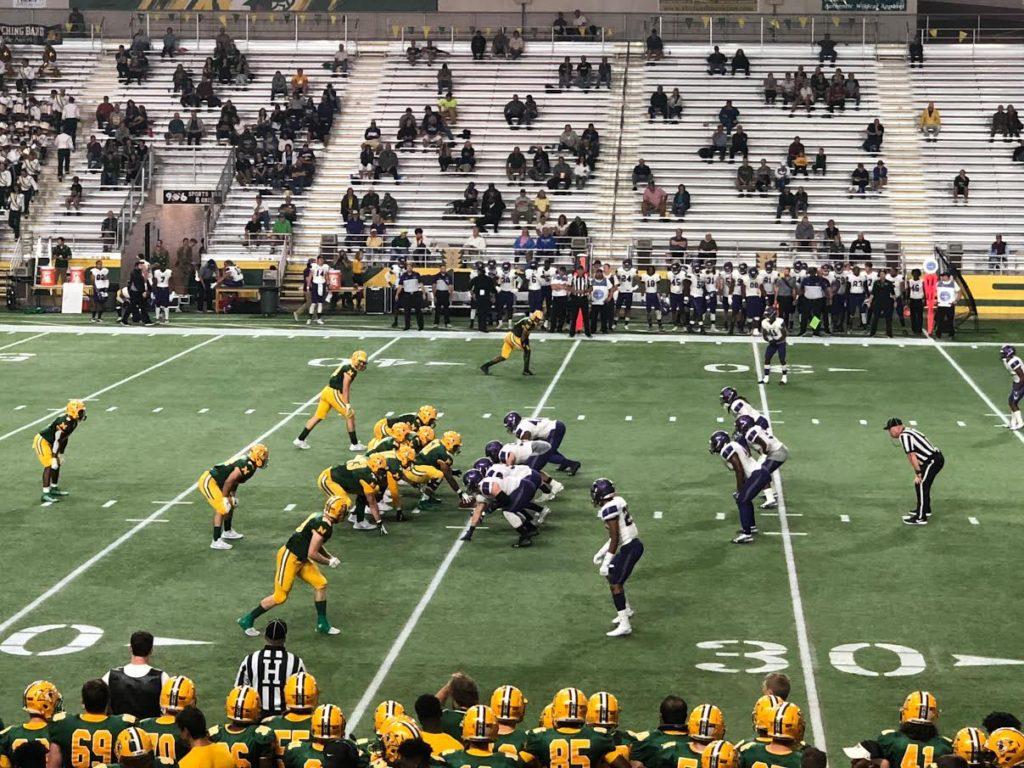 FULL TEAM EFFORT—NMU's defense showed up with takeaways on Saturday, and the offense capitalized with touchdowns to put the game out of reach. Travis Nelson/NW

The 2019 season couldn’t have gotten off to a better start for the Wildcats Football team in their 30-9 season-opening  win in front of their home fans in the Superior Dome, over the McKendree Bearcats. The defense shined for NMU, forcing two turnovers and stopping the Bearcats at the goal line early in the first quarter. Head coach Kyle Nystrom and defensive coordinator Kirby Cannon also saw their defense play good football, and they both came away from the game with positive feedback.

“I was happy that we were accountable, and we executed some things real well,” Nystrom said. “[We] had high energy, really ran well, had some good collision, good impact and hitting.”

Cannon said it was fun to watch his defense play they did, and he was also impressed with how they knew their assignments, which can be a problem in the first game of the season. Cannon also applauded the team effort, as one guy didn’t stand out on the defensive side of the ball.

The Wildcats knew what they needed to do to win, and Nystrom talked about their keys to victory the night before the game. Going in, holding McKendree to only eight explosive plays (run plays over 12 yards and pass plays over 15 yards) was the goal, and his defense showed out.

“We felt if it was less than eight, then we would be in good shape. We limited our opponent to five explosive plays, and then on the flip side of that we have to create plus plays for the defense, and negative plays for the offense,” Nystrom said. “We ended up with 17, so when you get into that 17-5 category, that’s heavily in your favor, you give yourself an edge to win so we were happy about that.”

The offense took advantage of the defense’s takeaways as they took a 10-6 lead and never looked back. Quarterback Ryan Johnson delivered in his return to the program, going 10 for 14 throwing, with 130 yards and three touchdown passes. Running back Tyshon King paced the ’Cats backfield in his collegiate debut, carrying the ball 13 times for 80 yards and one touchdown. Coach Nystrom and his staff also pegged King as the team’s offensive MVP of the game for his performance. Nystrom said they couldn’t decide on a standout defensive player, so the entire unit was given the award. Running back Deandre Caldwell also showed out on special teams, where he ran back two kick returns for 73 yards, earning special teams MVP of the contest. Benjamin Loutsis, Ryan Knight and Mitch Heaton all caught touchdown passes for Northern, with two coming in the second half to put the game away.

Both sides of the ball clicked in their season-opening win, and Nystrom was asked how important it was to stay consistent as they travel to Odessa, Texas to challenge the University of Texas-Permian Basin (UTPB) Falcons this weekend.

“It’s critical. You have to do it all the time, that’s why I talked to the players about being motivated, being on the edge all the time. Just because you won a game last week, assures you nothing for next week,” Nystrom said. “So you’ve got to stay on the edge and you’ve got to stay with a sense of desperation. You have to check yourself and you got to live in that world all week long before your next game, otherwise it’s going to sneak up and surprise you.”

Last year in the first game of the home-and-home series between NMU and UTPB, the Wildcats survived in the fourth quarter with a 27-22 win. Nystrom knows of the challenges that traveling to Texas to play will bring, and he’s making sure his team will be ready to step up on Saturday night.

“It was a real close game, we got into an ‘into the game’ battle with them, and the offense made a third and long conversion to get us out of the game, but it was on the fence in the end,” Nystrom said.

Nystrom lived in Texas for three years while coaching at Texas Christian University (TCU), so he is well aware of the Lone Star State’s passion for football. He also remembers the first time he took a team down to Texas back in 2017, where Angelo State University (ASU) defeated NMU 48-20.

“That’s who they are, what they are and how they live, and they’ll tell you that,” Nystrom said. “So we better get ready, because we’re going into Texas to play and as I addressed the team Monday night, we didn’t show up to play a grain of salt when we played down there at Angelo State. So we’ve got to go and represent, not only ourselves but everything else. We have to be motivated to play, and we have to play better than we did the first game.”

The Falcons are also 1-0, after they beat up on Wayland Baptist University (WBU) 60-7 last weekend. UTPB’s offense was in full effect, as quarterback Taylor Null went 9-14 for 164 and a touchdown. Their rushing attack gained 277 yards on the ground led by running back Leroy Giles’ 79 yards, and wide receiver Kyle McBride paced the receivers with 123 yards and a touchdown in the passing game. UTPB is dangerous offensively, and Nystrom knows of the challenges that they’ll bring.