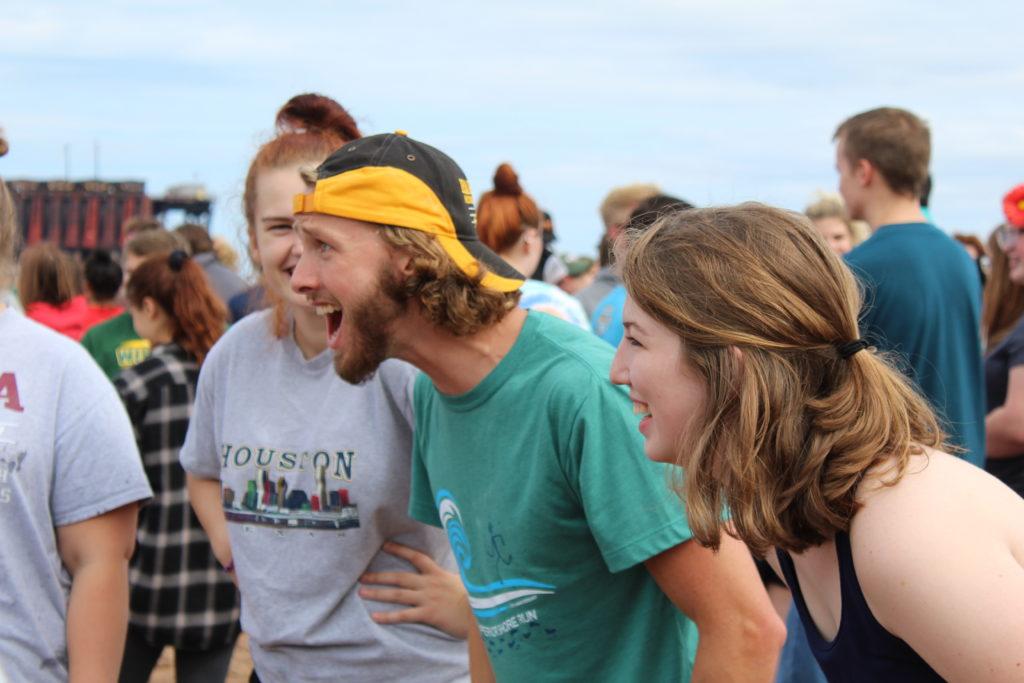 GO TEAM GO—Freshman environmental science major Levi Lewis cheers on teammates as they compete against other residence hall houses for a case of Red Bull. Photo courtesy of Sarah Hart

With the sun beating down, tons of smiling and spirited NMU students laughed and cheered as they splattered ice cream onto each other’s faces, washed it off in the lake and showed off their athleticism in the sand.

On Sunday, Sept. 15, a large group of students gathered at Dead River Beach from 2 to 4 p.m. to kick off Homecoming Week with the annual Dead River Games. The event was organized by the Center for Student Enrichment (CSE), which also puts on many of the other campus Homecoming activities.

“I was there and was impressed by the turn out and fun being had by the students,” CSE Director Rachel Harris said.

Students who wanted to participate in the festivities formed a team with other members of their house, and each house team was set to compete against each other. The two main competitive activities set out for students were an ice cream scoop race and an obstacle course.

At the ice cream scoop race, one member of the house team was elected to stand at the top of a ladder, poised with an entire bucket of ice cream and a scooper. The other team members had to lay on their backs and try to catch at least one scoop of ice cream in their mouths. The team that could get a scoop into each member’s mouth the fastest would be the winner—which happened to be Mountain House of Van Antwerp Hall.

As for the obstacle course, students participated in a variety of fun activities and conquered them with the help of their teammates. The course began with a wheelbarrow race, in which one player held the ankles of another while that player walked on their hands toward the checkpoint. The students wobbled as they did so, trying to get to the next phase of the race as fast as they could.

Once they got to the checkpoint, they high-fived their teammate who was already waiting with a baseball bat by their side. This player then had to place their head down onto the base of the bat and spin around rapidly, and then run dizzily to the next player waiting in line.

The next player then had to perform a quick hula hoop routine, and make their way to the next player who would then proceed to begin building a sand castle.

The very last obstacle for students to overcome was a messy treasure hunt of sorts, where students had to dig through a small pool of thick chocolate pudding to find an object. Once it was found, team had officially completed the obstacle course. Whoever completed it the fastest was to be the winner, which turned out to be Concert House of Van Antwerp Hall. Both of the winning houses received cases of the Red Bull energy drink as their prize.

Aside from the formal activities, students also engaged in other good-spirited shenanigans such as dancing to music, playing in the sand, skipping stones, tossing footballs and even throwing each other in the lake.

“I didn’t have anything else to do, and I figured it would allow me to socialize with people,” freshman psychology major Stephanie Fetty said. “It was kind of like a team-building thing. I participated with Neverland House, and I didn’t know any of them, but now I do.”

Many students were able to form new connections with their peers through the event.

This year’s Dead River Games created a way for students to engage with their community and create a deeper bond with the other members of their house through teamwork and working towards a common goal. It was a successful afternoon of friendly competition and school spirit.