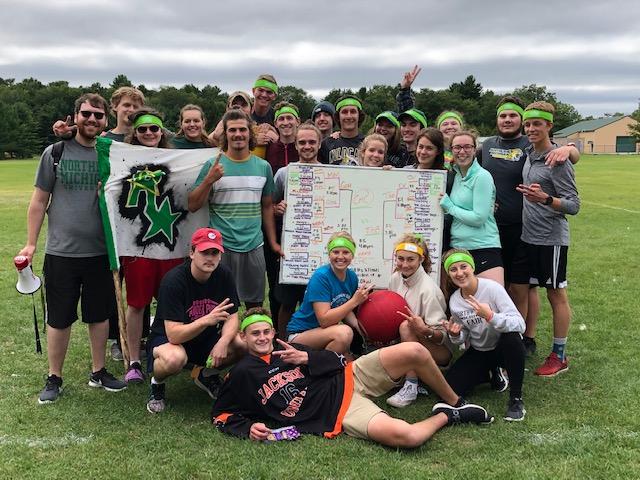 The dorm experience is one of those things about college

that can stick with people, right behind all-night cramming

sessions and the origins of a coffee problem. Here at

are 55 Resident Advisors (RA). These individuals are hand

picked and recognized as a safety for students, when life

steps out of the classroom. But outside their basic duties,

RAs play a larger role in forming relationships between

the other students that they live with. Every hallway is classified

as a house, that house holds a specific theme. Some

are decades old, some are brand new. Murals cover cinder

block walls to reflect the individuality of each community.

RA in Concert House of Van Antwerp (VA). The at mosphere

of his house is something that Moesch can only

a big family,” Moesch said. “We put the fun in

Part of that fun is sophomore graphic design and social

media major Branden Zann. While the house is active,

Zann explains that the core of the community is really

about support among their small living space.

“The people in this house are our biggest supporters. We

said. “Whatever chance we have to make a banner and

root each other on, we’re all about that.”

When it comes down to the definition of what an RA is,

Moesch explains that no two RAs will ever have the same

answer. While the job is to ensure every student can be

safe, sleep or study, spending day-to-day within a house is

much more than that.

“I am directly and indirectly invested in every single one

of my resident’s lives,” Moesch said. “I want to see them

You see some of their hardest moments but also their

Each of the houses carry a history and with that comes

certain traditions. But as time goes on things come and go.

Not every house will have the same interests as the last.

Instead of those traditions being the glue among house

members, Zann views it more as the simple quality time

that builds the relationship.

“These traditions are what help give us a break so we

Zann explains that many house residents can often be

found on small adventures and activities just day-to-day, be

it hammocking, hiking or bonfires. He has faith that many

more students will be able to experience the uniqueness of

living in a house community.

As the university continues to grow, there are houses and

entire buildings that have been transferred out of a familiar

space. This was the situation when West Hall closed

down at the end of the fall 2017 semester. This can cause

a house’s slow growth when everything is starting from

Ragnone was a West Hall resident his freshman year and

is now the RA for Misty Mountain in Maple West. During

his time as a resident, Ragnone spent time with his RA

Matt Scheikart and has tried to carry over some of those

qualities as he now tries to build a house community from

doing. He was just super welcoming to me and everyone

there,” Ragnone said. “He didn’t care about the awkwardness

of the position. He just genuinely wanted to be there

Being in the position now, Ragnone sees his job as

making sure that the comfort and well being of his Misty

Mountain residents is a top priority.

“I think it all boils down to making sure that everybody

in my house feels safe. They feel like it’s a home and they

have people they can go to,” Ragnone said.

Getting a taste of West Hall culture, that was steeped

in traditions to something nearly brand new has given

Ragnone a unique perspective on the forming of a house

“Going from West Hall, I just got smacked with everything

at once, it was all there,” Ragnone said.“We moved

into The Woods and that wasn’t established at all or anything.

It was important to me to try and start the atmosphere

Ragnone explains that the change in building was not

only a new environment, but a new space where it became

all too easy to shut yourself off in your own space.

Opposed to West Hall where it was purposefully designed

to make residents to get out and interact, The Woods has

doors that make it a different environment.

Since it’s only the first month into the year, the building

of the Misty Mountain community is still at a slow pace.

But Ragnone has already begin to notice steps to progress

and residents opening up.

“There is a small group of people that are really interested

in the whole being involved thing and there is another