Cougars back in town 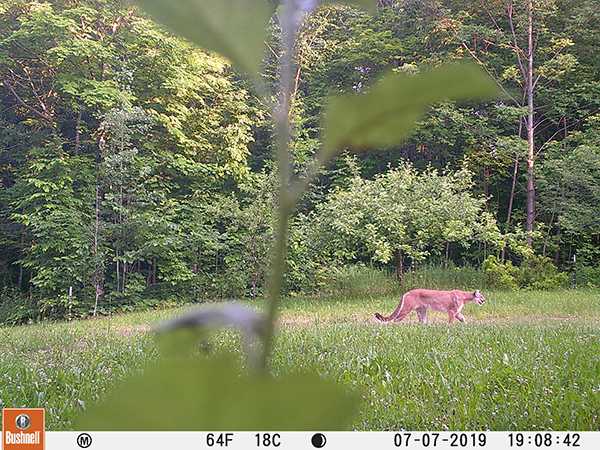 YOOPER REBIRTH—Mountain lion sightings increase with two confirmations spotted this year in the U.P., and the species remains endangered by the state of Michigan but illegal poaching persists. Photo courtesy of Michigan's Department of Natural Resources.

Michigan’s Department of Natural Resources (DNR) has confirmed two cougar sightings in the U.P. this year, one in Gogebic County and the other in Delta County.

Cougars were once hunted entirely out of Michigan. Although Michigan and the entire eastern United States used to support a cougar population, the big cats were essentially extirpated by the late 1800s. According to the DNR, the last legal killing of a wild cougar in Michigan was in 1906 near Newberry.

Although there is no evidence currently of a breeding population in the U.P., DNR Large Carnivore Specialist and NMU graduate student Cody Norton, said that in coming decades cougars may one day breed in Michigan again.

“In the late ‘90s and even before that, we were starting to get reports that we were able to confirm, and then we finally got together a group of individuals who were actually trained in identifying cougar signs or pictures in 2008,” Norton said.

Since that time, there have been 40 official cougar confirmations in Michigan. Each report of a cougar is sent through Norton to the four specialists there. Every cat that the DNR has been able to sex in Michigan has turned out to be male, suggesting that there is not a breeding population.

This evidence indicates that these young males are from western states such as South Dakota, Wyoming and Nebraska. These males are pushed east, seeking a female to breed with.

“There’s too many males in that area and [the young males] can’t really compete with them because they’re young,” Norton said. “So they take off looking for a new area, and they just keep going. They pretty much never find a female because females don’t do the same sorts of behaviors.”

Not only do these roaming young males find a lack of mates in Michigan, they are sometimes met with human aggression as well. Cougars are considered endangered by the state of Michigan and it is illegal to poach a cougar. However, people find ways to kill these cats regardless. There have been two poached cougars, according to Norton. Both were male. Neither is thought to have been killed mistakenly.

One was seen at a camp and then shot, Norton said. The perpetrator bragged about this kill to people who eventually turned them in. The other was caught and killed in an illegal snare which was not up to the specifications for the legal snaring of coyotes and fox.

The snared male’s carcass was dumped at a major highway intersection, so Norton believes that its killers wanted it to be found.

It is likely that this cougar, which had been seen around in the area before it was killed, was intentionally targeted. The display of its corpse at the intersection may have been an expression of anger from the hunter.

“It’s odd, especially for cougars,” Norton said. “With wolves we’ve had some of that behavior. In the western U.P. there’s been some hung by nooses from bridges because people aren’t happy with them being on the endangered species list. But for cougars, they’re so rare because they don’t have a breeding population, that there’s no reason for people to do that.”

Since 2008, Norton said the average amount of cougar sightings in Michigan has been about 3.25, so this year’s number of sightings is nothing unusual.

“I think with how cougars are currently managed in the whole eastern United States, I think eventually it’s probably likely [that there will be a breeding population] because there aren’t really any barriers to them coming, other than female behavior. And you can look at those western populations, and it does look like they’re expanding and growing a little bit, and moving farther and farther east.”

Norton said Wisconsin and Minnesota are getting more verified sightings than in the past as well, but this may be due to the increase in technology available to aid in these confirmations. Wisconsin has had four confirmations this year.

There is an online database where anyone in the state of Michigan can report a possible sighting. Each week, the DNR team receives 10 to 30 reports statewide, most of which do not have any evidence connected with them. Although the DNR receives many falsified or mistaken reports, some are confirmed via the team’s analysis. Possible cougar sightings can be directed to the online DNR reporting system.