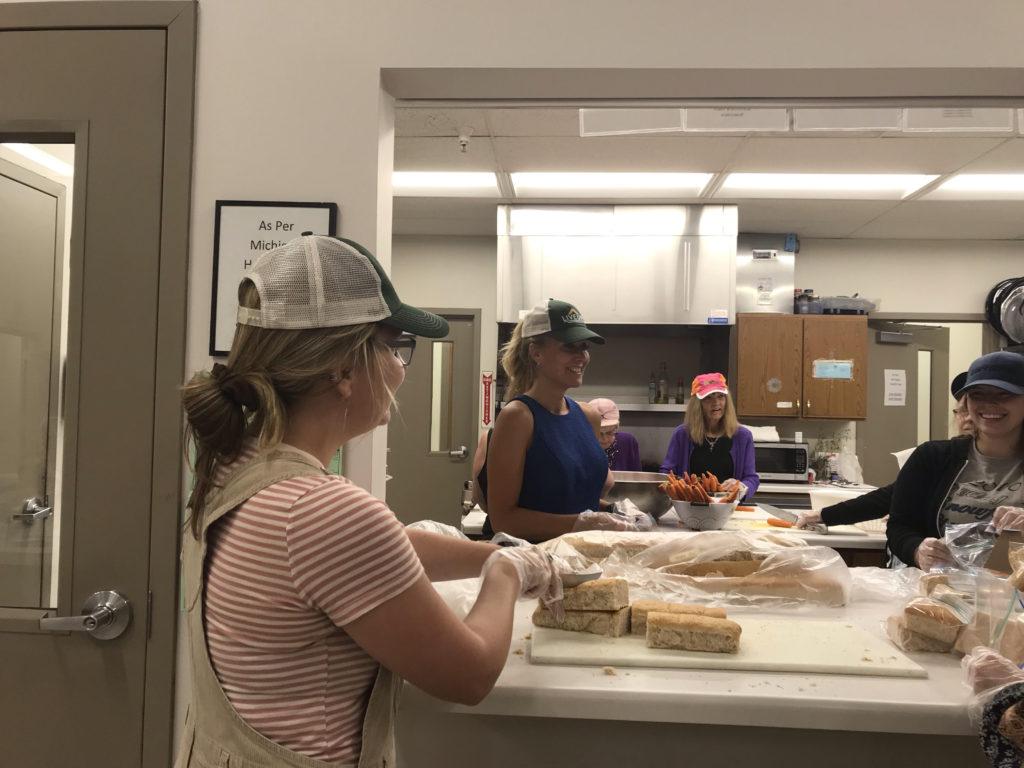 CATS AT WORK—Volunteers bag sandwiches for students at NMU’s chartered public school during their packing session on Wednesday September 25th at the Marquette Salvation Army.

NMU Cat Packs is entering its fourth year of feeding children in the Marquette community by providing them with weekend meals.

This volunteer program is run by NMU’s Volunteer Center and Salvation Army, and the volunteers who participate are mostly connected to NMU, but also include community members.

Cat Packs provides about 70 students at North Star Academy with meals each weekend. The packs include three dinners, two lunches, two breakfasts, as well as some snacks. The makers of these packs focus on providing fresh fruits and veggies and easy-to-prepare meals for the kids, senior economics major and Superior Edge Volunteer Center Coordinator Sarah Head said.

“I love it,” Head  said. “We’re impacting a lot of kids in our community who are facing food insecurity in their day-to-day lives.”

Rachel Harris, Director for the Center of Student Enrichment, agrees with Head. She has been with the program from its beginnings and has watched it grow in the community.

“We heard teachers say when we first started doing the packs, even high school kids were crying, they were so relieved. The stress that was taken away from [the students] was tremendous and they look forward to Cat Packs,” Harris said.

Students receiving Cat Packs all qualify for free or reduced lunches and fall within the K-12 age range. Many of these students are members of the same families, so certain families might receive two or three Cat Packs depending on how many students they have at North Star at the time. North Star Montessori Academy is a public school chartered through NMU.

“That’s why Northern has a unique connection to it,” Head said.

Many Northern students currently spend their Wednesday afternoons focusing on providing for the K-12 school by making up the packs of food.

“We’re providing an impact directly on the students and families who are receiving the packs,” Head said. “As well as giving Northern students and greater Marquette community members the opportunity to take part in giving back to the community.”

Cat Packs are made at 3 p.m. every Wednesday at the Salvation Army. Cat Packs began in 2015 as the pilot year. It began as a soft pilot program and provided approximately half the number of packs that it now does. After it secured funding for the program, it now meets the full need of the school, Head said.

The funding for Cat Packs does not originate with NMU, but with grants from the community. Grants provide the food and supplies needed for the packs.

These grants include support from the Community Foundation, all of the three rotary clubs in Marquette and the Lions Club, Head said. Cat Packs purchases their food from Feeding America and works closely with the Marquette Alger Regional Educational Service Agency.

Senior secondary education integrated science major Catherine Boileau was volunteering for the first time at Cat Packs this Wednesday, Sept. 25. As a member of the Student Leader Fellowship Program, Boileau said she has the goal of organizing volunteers for charities this year and brought seven people from Campus Crusade for Christ (CRU).

“It’s about the kids, you know,” Boileau said. “It fills a gap. When kids go to school and get free and reduced breakfast, free and reduced lunch, that fills them for five days but then over the weekends they don’t have that. That can really impact their development and their happiness, and their mental, psychological stability. I just really care about them and want to make sure that kids can eat.”

Cat Packs will appear at the Tapping Into Local Food: Food Insecurities panel on Thursday, Oct. 3, at the Ore Dock Brewing Co. to discuss their impact on the community.