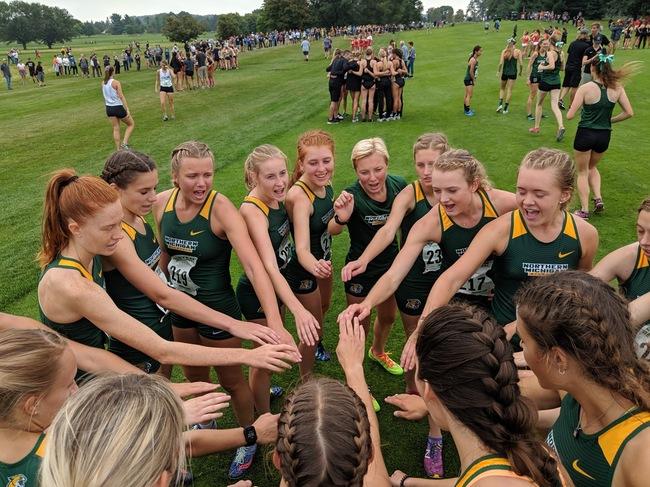 RUNNING AWAY WITH SUCCESS—NMU goes into the Roy Griak this weekend with real momentum, and they are wanting to continue to improve as the season progresses. Photo courtesy of NMU Athletics.

“The season is going very well, we started with a scrimmage against Michigan Tech which went very well. Then we went onto Northwood invitational in which we ran very well and at the Spartan invite we ran even better,” Ryan said. “So it’s been a great season so far, I am excited to see what we can do for the rest of the year and how we build off our meets.”

Coach Ryan has been very impressed with her team so far and the results they have been producing.

“The upperclassmen are solid and have great race experience and will continue to grow,” Ryan said. “The freshmen have impressed me, I plan to keep teaching them how to race, and hopefully they continue to keep moving up.”

Ryan also praised her team for their attitudes as the season has begun.

“The atmosphere with the team is great and the culture is amazing. They all have positive attitudes. They also all work hard and enjoy it and they just love to compete.”

This weekend, the team will be competing in the Roy Griak Invitational, hosted by the University of Minnesota (UM). The team did not have a meet this past weekend but have been preparing intensely for this upcoming meet featuring teams from all over the nation.

“Last week we had a hard week of training, we trained intensely to improve our level of fitness and speed,” Ryan said. “We backed off a bit this week so we are rested and ready to race well on Saturday.”

This week’s invitational will include many teams from Division I through Division III levels, such as the University of Mary (UM) and Covenant Springs University (CSU). However, in this meet, the teams are split up.

“Our last meet had DI teams to DIII teams all mixed in the race, however, this meet will have one race for just D1 teams and another for DII and DIII schools,” Ryan said. “However, we will race against teams and athletes from all over the nation competing against ranked teams and runners.”

Coach Ryan is very confident in her team’s capability against the nation’s top runners in this meet, where she hopes to see her team finish in the top five.

After the Roy Griak this Saturday, the Wildcats will have two weeks off before returning to the trails on Saturday, Oct. 12, where they travel to Romeoville, Illinois to compete in the Conference Crossover meet hosted by Lewis University (LU). NMU will then be back home to host the U.P. championships on Friday, Oct. 18.

However, the Wildcats will have a lot of work to do before then at the Roy Griak this weekend. The event begins at 10:30 a.m. this Saturday, Sept. 28 in St. Paul, Minnesota.