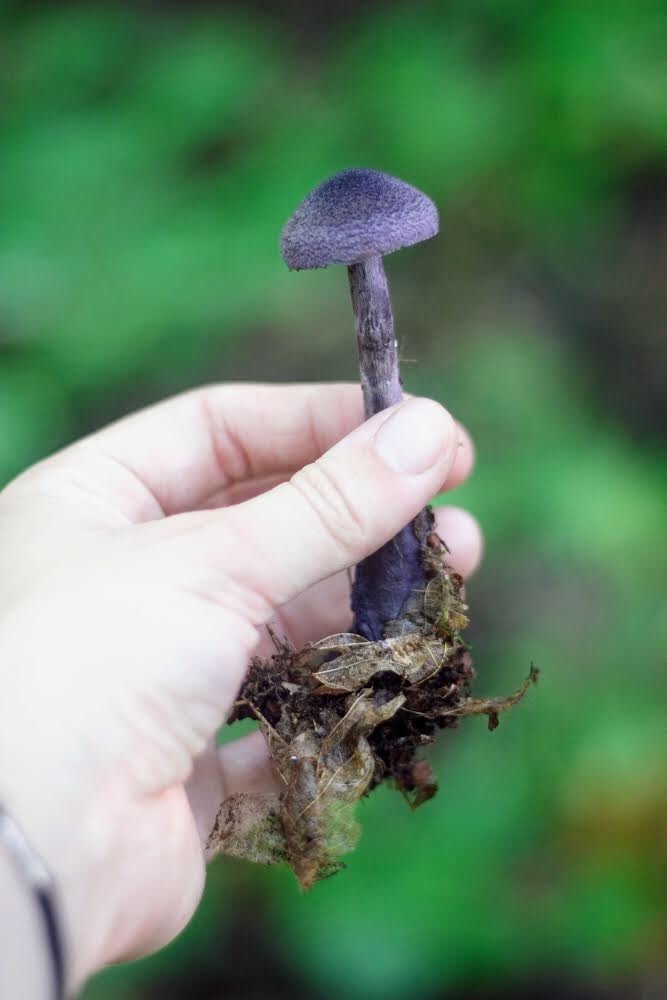 A FUNGI—One of the many Honey Mushrooms growing this season. Photo courtesy of Maddie Pederson

As the leaves change to warm shades of auburn and the first signs of fall appear, the forest floor becomes a mushroom forager’s paradise.

For “Mushroom Joe” Lane, being in the woods surrounded by fungi is pure bliss. Lane was immersed in science and the natural world since he was born. Lane now has a company selling and making mushroom products such as birch mushroom and reishi mushroom blend tinctures.

“Alchemy and chemistry have been day one interests of mine so when I discovered the transformative powers of the fungal kingdom it was exactly what I was looking for,” Lane said.

Senior photography major Maddie Pederson started foraging two years ago alongside her boyfriend, Lane. Pederson had always been out in the woods identifying trees and plants until she fell in love with fungi. Her advice for first-timers is to go with someone who has been doing it for a long time, research what you find and ask multiple people to identify it before consuming it.

“Fungi hides in the forest; a lot of people don’t even notice it,” Pederson said. “Now that I have learned more about mushrooms, I see them everywhere I go. I love to photograph their unique features.”

Understanding the dangers and risks that fungi can have is a crucial part to fall harvesting. Foraging requires knowledge, patience and caution. Mushrooms can be identified by their form, spore shape/color and gills. Some can also be identified by their odor or texture. There are some mushrooms that are fatal to humans when consumed but there are quite a few found in the U.P. that are easily identifiable and edible.

“Research and study the mushroom before you eat it.Avoid all mushrooms until you know for sure,” Pederson said. “It’s really easy to stumble upon look-alikes of edibles that aren’t edible so just know what you’re dealing with before you cook anything up. You should, for the most part, cook your mushrooms because some of them have toxic qualities when raw and need the heat to release those chemicals.”

The most common, easily identifiable, edible mushrooms in the U.P. are oysters, chicken of the woods,honey mushrooms/stumpers, puffballs and chanterelles.The easiest way to identify them is to have a field guide on hand. “Smithsonian Handbook of Mushrooms” and“Mushrooms of the Upper Midwest: A Simple Guide to Common Mushrooms” are two highly recommended books in the Midwest mushroom community.

“It’s very important to stay humble when getting into foraging because there is so much to learn and so much to be wrong about,” Pederson said.

Lane said that honey mushrooms are a good way of getting into mushroom hunting but there is a learning curve to them too. Honey mushrooms have poisonous, possibly deadly look-a-likes. They can also decay internally without looking spoiled externally. That can cause mild food poisoning.

“This year is very heavy with honey mushrooms,”Lane said. “They will quickly impart harvesting wisdom and etiquette for beginners.”

Identification of mushrooms is not the only part of foraging that takes practice. One must know where to find them first. Good mushroom hunters rarely give away their “secret spots.” Doing light research on what mushrooms are in season and the conditions they need to thrive helps foragers know where and when they will grow.

“Look on warm days right after it rains,” junior art and design major Liam Deephouse said. “If it rained yesterday and it was warm today, you want to go out looking for mushrooms.”

Deephouse was born and raised in the U.P. and was first introduced to mushroom harvesting at a young age when his grandmother would bring morels home for him.

When asked to impart conventional wisdom for beginners, Lane mentioned to not over-harvest anything. With mushroom foraging becoming more popular, important fungi are becoming scarce. If a mushroom is picked, the forager should know what to do with it to ensure it’s being used to its full potential.

“Mushroom hunting as well as wild picking, seems to be the new big thing,” Lane said. “Some of the medicines, like chaga, get wasted all of the time. It is terrible because it is so rare and so potent. Everyone deserves to learn but be smart and respectful.”

Picking mushrooms with a knife is a widely practiced technique by harvesters everywhere although some require it to be picked whole. Foragers should know the mushroom they’re looking for and how to properly harvest them to leave the root system undisturbed.

Mushrooms should be identified before picked and cooked before eating them. Raw mushrooms should not be sampled. They should be washed accordingly, although Deephouse mentioned not to wash them too much or they can get soggy.

NMU Eco Reps are hosting a foraging workshop at 4 p.m. on Thursday, Sept. 26, where Lane will be teaching the health benefits of local plants and how to find them. The workshop will be held at Noquemanon North Trails trailhead by Tourist Park.