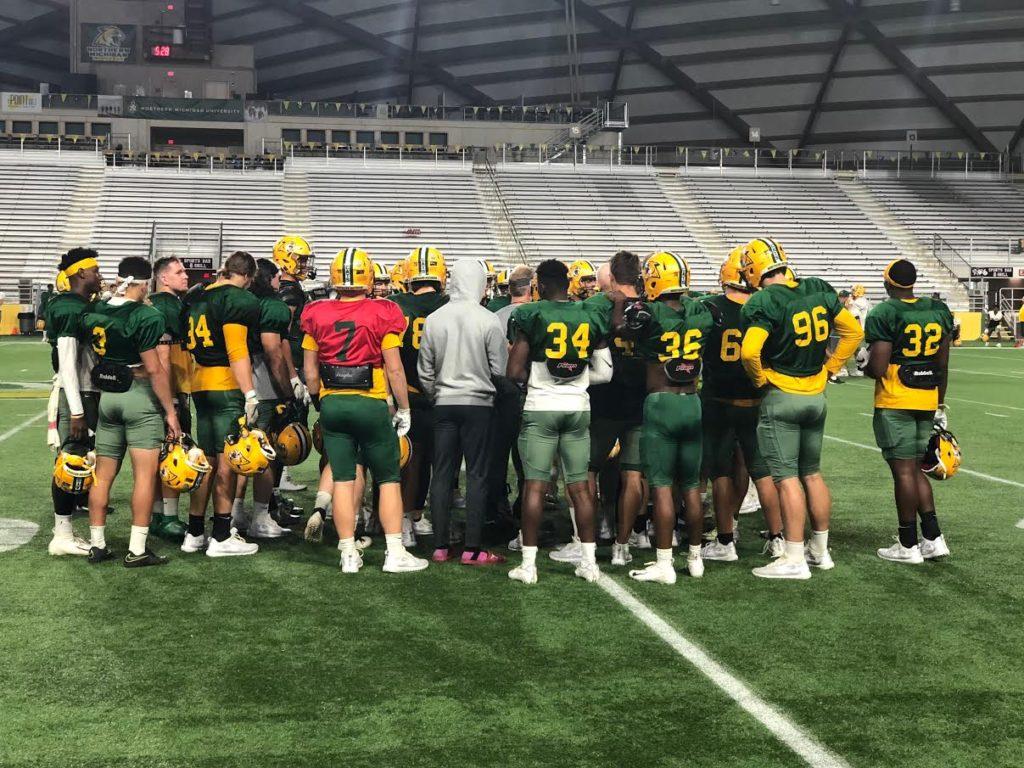 RECRUITING RUT—NMU Football Head Coach Kyle Nystrom meets with his team after an October practice. All NMU sports are left without their coveted spring recruiting seasons due to COVID-19. Travis Nelson/NW

The NMU Football team forced five takeaways against the explosive Ferris State offense, but came away with a 38-10 road loss to the second ranked Bulldogs this past Saturday, Sept. 28.

The loss drops the Wildcats to 1-3 on the season, and 0-2 in conference play. The chances were there to pull one of the biggest upsets in school history, but the ‘Cats couldn’t capitalize on the Bulldogs’ mistakes.

“We had four takeaways on fumbles on defense and then we got one on special teams,” head coach Kyle Nystrom said. “That’s the first time in my life that we’ve had plus five in takeaways and not won a football game. When you get those kind of takeaways, you have to cash in, and we didn’t cash in.”

Even after putting the football on the ground five times, FSU outgained NMU 429-252 in total yards. FSU led only 3-0 after the first quarter, but would score 14 points in both the second and third quarters to put the game away. The Wildcats scored its touchdown of the game with a little over five minutes remaining when quarterback Ryan Johnson found wide receiver Isaiah Popp for the touchdown from 10 yards out. The catch made the score 38-10 in favor of FSU, and that would wind up being the final score of the ball game.

Overall, Nystrom said that it was a blast playing a good team like FSU, however he was frustrated with his team’s mental mistakes that in total resulted in nine penalties for 74 yards.

“When we played the right way, we played really well on defense. On offense we struggled, and there’s a couple reasons for that,” Nystrom said. “We’re making mistakes that we shouldn’t be making, we’re pulling the wrong way, our assignments aren’t right. There’s no reason for it.”

NMU needs to rebound in a big way this weekend when they host the Wayne State University (WSU) Warriors. WSU is 2-2 on the season, but are coming into this weekend’s game riding high after defeating 25th ranked Saginaw Valley State 24-20 last week. The Warriors are a talented team, but the Wildcats are in need of a big home win.

“Right now we got our backs against the wall, this a must-win game. We got to get our act together,” Nystrom said. “They’re playing, playing real good. They present a lot of scheme and a lot of preparation because they do a lot of different things.”

Not only is it a huge game for the Wildcats’ season, it is also family weekend at the Superior Dome. The families of the players will be coming to watch from all over the country, and that brings a whole new dynamic of trying to win this weekend.

“The families of our players travel well, they come to a lot of the games, so it’s going to be even more eventful,” Nystrom said. “That’s great, we need support and we love it when all the people show up.”

Jeremy Statz, defensive lineman from Wisconsin Rapids, Wisconsin, has most of his family showing up for a great weekend. Being a senior, his last Family Weekend is important to him.

“It’s a big thing for me, my family’s been coming up every year,” Statz said. “They love this weekend.”

This weekend also gives perspective on our entire community, with not just the families of the players, but the entire Wildcat football family here in Marquette.

“Family weekend means to me that this university comes together as a family, and that is from the people coming to the games to the support of the town, to just anyone that walks by on the street saying ‘Hey, good luck this weekend,’” Statz said. “That’s kind of the little family we have in Marquette.”

More importantly, NMU wants to make a statement in front of their family and friends with a victory against WSU. Every supporter of this team comes to the games expecting one thing: to win. The Wildcats and Warriors will kick it off from the Superior Dome at 1 p.m. on Saturday, Oct. 5.

“It’ll mean a lot to my family to drive all the way, I’ve got my sister coming from Colorado and my brother from Illinois. I’ve got family traveling from a long way and they come here and expect us to win,” Statz said. “That’s kind of what our mental aspect is everyday, that when we come in here, is to win every weekend.”