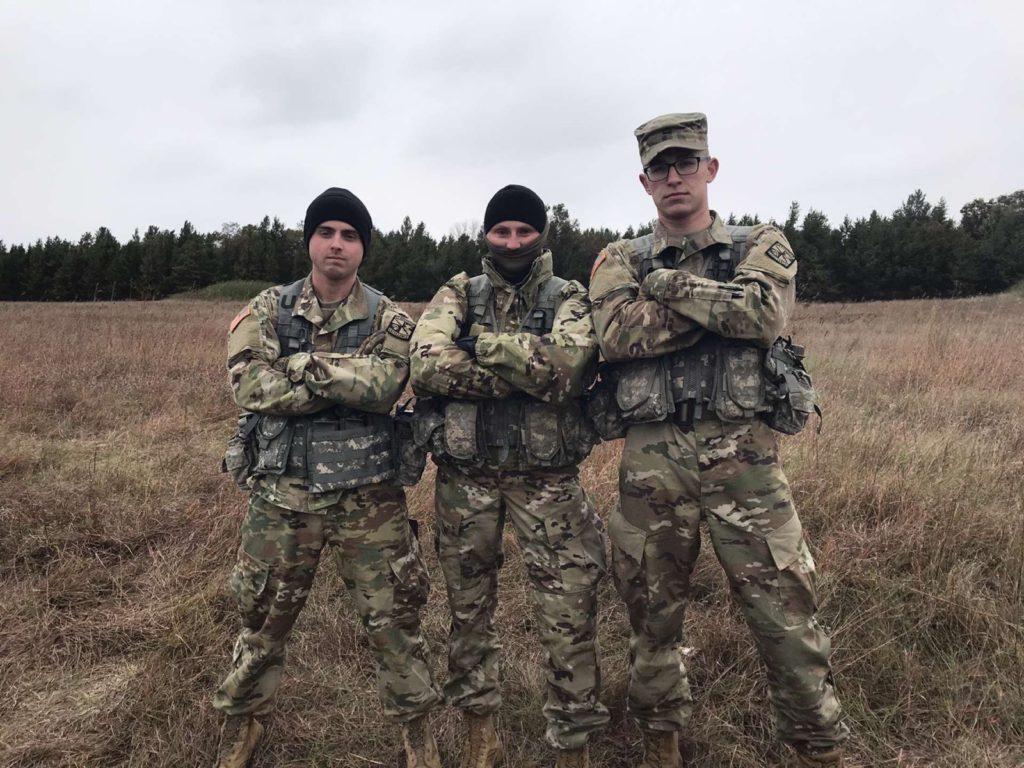 RUCKING TO VICTORY—ROTC cadets Anden Armbruster(left) from the not placed nine-man team, Ally Wasinksi from the 2nd place five-man team and Quinten DeMyer also on the nine-man team compete in the weekend long event. Photo courtesy of cadet Derek Hentkowski

It’s 30 degree weather with sleet, snow and 20 mph winds gusting at the cadets’ faces as they march a 22.31 mile course around Fort McCoy in Wisconsin with 35 pounds of supplies in their rucksacks to complete in seven challenges along the way.

Military Science Instructor Sgt. 1st Class Joshua Ingram ran one of the seven challenge lanes along the trail on Saturday, Oct. 12. Ingram’s lane was the call for fire lane and he had seven NMU cadet volunteers helping him. The competing cadets got scored on their performance at each lane which went into their final placing score.

“It gets them physically ready for the army at least on the combat side, but it also teaches them the key components of the army which is working together as a team and being able to lead somebody,” Ingram said. “Being in ROTC, we’re training them to become officers.”

The first day all the cadets arrived at Fort McCoy, the 18 teams competed in a relay race, and the place they got in the race determined who got to pick their starting time for the 22.31 mile challenge first for the following day.

“What I learned was resilience. It takes a lot out of you and it’s hard sometimes, but knowing that everyone’s going through the same thing and everyone’s pushing through the same thing, just stick together, work as a team and build off each other in order to meet the end goal,” junior multimedia journalism major Nate Jacobs said. “It’s just really rewarding and it helps you learn by working as a team and believing in your own strengths you can accomplish anything.”

Each task force in the nation does these ranger challenge events. Each first place team then moves on to their respective brigade headquarters to compete in a similar challenge to qualify for a national Task Force competition at West Point.

“It kind of like a bracket in sports, this is our varsity event,” Ingram said. “So every time you win in each bracket you move onto the next level of competition with Sand Hearse being the culmination at West Point.”

The cadets ended with an 18-part obstacle course and two mystery challenges including team push-ups and a mental memory exercise on Oct. 12.

The cadets will continue to train for similar events like the Northern Warfare Challenge where they demonstrate arctic survival skills which will take place in the winter semester. At these events NMU ROTC cadets are able to exhibit their strengths as the smallest program in the regional Task Force.