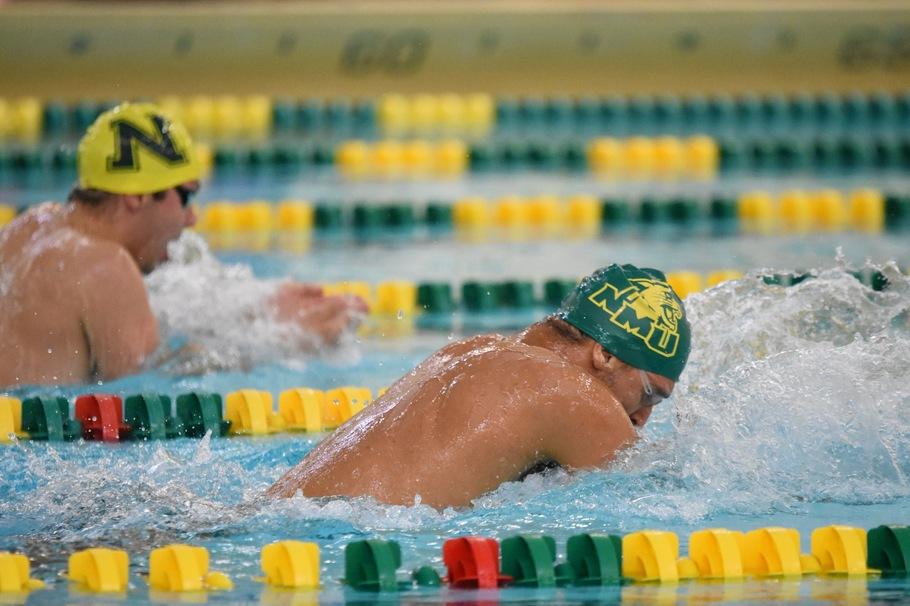 POOL PARTY—The Wildcats are on a roll as of late, dating back to the last couple of years. NMU will get its next chance for success in North Dakota this weekend. Photo courtesy of NMU Athletics.

The Wildcats showed no sign of weakness in its first official meet, as the NMU Women’s Swim and Dive team defeated the University of Findlay (UF) Oilers for the fourth time in a row with the score of 199-92 with four B cuts as well. The Men’s Swim and Dive team defeated UF with a similar score of 190-91. Head Coach Heidi Voigt talked about if she likes what her team has done thus far.

“I really do, we didn’t know quite what to expect. But half our team graduated last year, 12 women and 12 men,” Voigt said. “We brought in 11 women and eight men and they’re young, great energy on deck and in practice, so I’m really excited to see them get good races in.”

Voigt said Friday night was more sprint focused and kind of a fun, while Saturday was the first time they would get to do the events that they will do later in the season in the conference and hopefully national championships.

Defending national champion in the 200-yard and 100-yard backstrokes Rachel Helm showed no sign of slowing down. The senior won both events with times of 56.41 and 2:02.50 which earned her a B cut. Freshman Michaela Nelson won both of her events as well, finishing the 50-yard freestyle in 24.91 and 200-yard individual medley with a winning time of 2:13.16. Freshman Meritxell Font Cantarero ended up winning both of her events. She finished 200-yard butterfly with 2:08.15 and 100 yard butterfly with 58.42. The Wildcats won 15 out of 16 events total over the course of the two-day meet.

The men also had a good showing, as four Wildcats ended up winning both of their individual events. Senior Lajos Budai won the 50-yard and 100-yard freestyle events with the times of 21.54 and 47.78. Junior Ondrej Zach won his first events as a Wildcat in the 1000-yard and 500-yard freestyle events with winning times of 9:45.62 and 4:45.64. Freshman Roberto Camera won the 100 and 200-yard breaststroke, crossing the line with times of 57.54 and 2:09.58. Freshmen diver Micah Currie capped off NMU’s successful weekend when he won both of the boards as well.

The Wildcats better have enjoyed the home meet, because it is one of few this season. NMU heads on the road this weekend for a multi-dual meet against South Dakota University (SDU) and St. Cloud State University (SCSU) on the men’s side. For the women’s team, they will face off against SCSU, SDU and host Minnesota State University-Moorhead (MSMU). Voigt knows that it’s just one of those years having a tough schedule with a lot of road meets.

NMU travels to West Fargo, North Dakota to compete this weekend, beginning at 6 p.m. on Friday, Oct. 18 from the Hulbert Aquatic Center. The two-day meet will finish off at 10 a.m. on Saturday, Oct. 19.