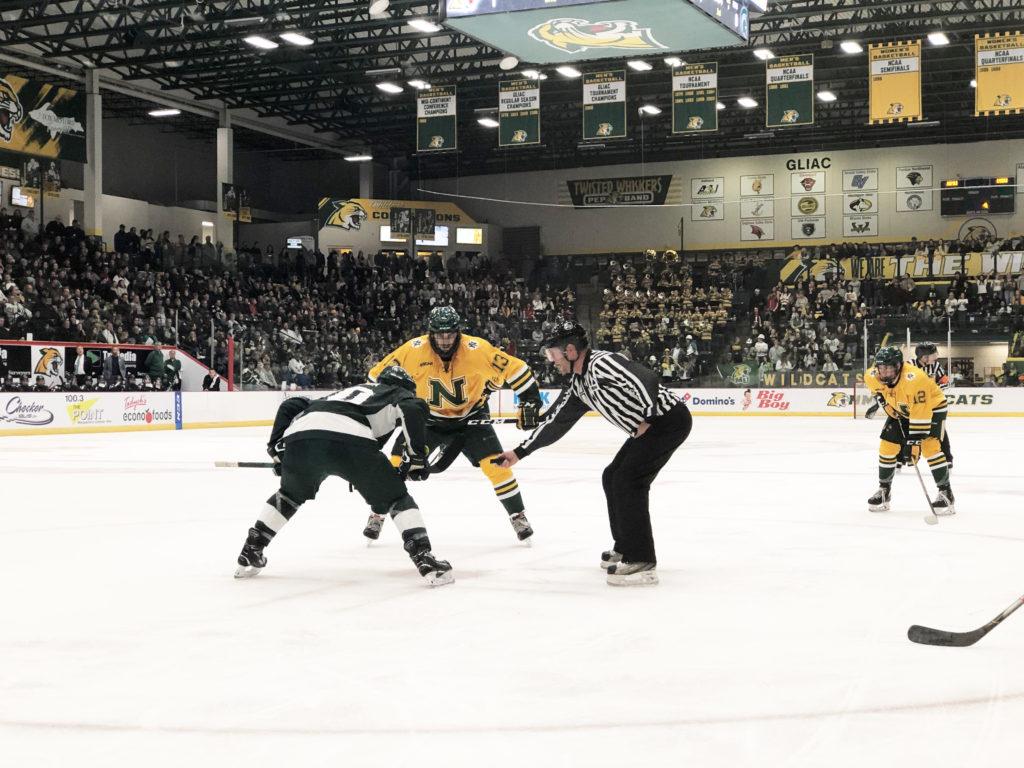 MOVING FORWARD—Luke Voltin prepares for the referee to drop the puck for the face-off on Saturday, Oct. 12, the second game of the home opener as Garrett Lee looks on. The `Cats are now 1-1 on the season after splitting with the Spartans. NMU has a quick turn-around before that travel to Boston to take on the Boston University (BU) Terriers this weekend. Jackie Jahfetson/NW

Two nights in a row, the Michigan State University (MSU)Spartans and NMU Wildcats battled it out inside the confines of the Berry Events Center, and both walked out with a win apiece. MSU won the series opener 5-3 on Friday, Oct. 11, and the Wildcats responded with a 2-0 shutout win in the finale on Saturday, Oct. 12 to improve to 1-1 on the year.

Defense was the story for the ‘Cats on the weekend, giving up only 21 and 15 shots respectively in the two contests. On Friday night, NMU took the loss despite winning in faceoffs, shots on goal and on the power play. The Wildcats went 2-4 on the power play, while holding MSU to just 2-6. The Spartans took a 2-1 lead and never gave it back. MSU put it in the dagger with 33 seconds remaining when Brody Stevens knocked in the empty net goal to make the score 5-3. The goalscorers for NMU were Griffin Loughran, Vincent De Mey and Grant Loven. Nolan Kent was solid in goal with 16 saves.

The script flipped entirely on Saturday night, as NMU goalie John Hawthorne pitched a shutout in the team’s 2-0 win with 15 saves. Hawthorne talked about his first game as an NMU Wildcat.

“I think I was seeing the puck okay, I was feeling pretty good but the guys only gave up 15 shots. They did a really good job clearing rebounds and keeping things to the outside for the most part,” Hawthorne said. “Every shutout is a team shutout and I think tonight was a pretty good example of that.”

Loughran scored his second goal of the season to give the Wildcats the 1-0 in the first period. That would be the score for most of the game until De Mey flipped one in from the blue line over the glove of MSU goalie Drew DeRidder with less than two minutes remaining to ice it. The impressive defensive performance of the weekend continued with forward Ty Readman’s line. Readman also added an assist on Loughran’s goal, and he said he liked how his team performed.

“I think that was one of our goals for the weekend, was to keep them below 20 shots,” Readman said. “It was a team goal for us and we achieved it and everyone played a part in that. So yeah, perfect game plan.”

Head Coach Grant Potulny was pleased with his team’s performance over the course of the two games, and thought his team was a little too excited for Friday’s game. However on Saturday, Potulny’s feelings were different.

“I think sometimes as a coach you can tell four or five minutes into a game if your team’s really dialed in, and I had that feeling tonight,” Potulny said. “Even though it was a one-goal game the whole time, I felt confident. I felt like we were keeping people to the outside, and I think a big part of that low number of shots is that our forwards did a much better job getting into shooting lanes.”

The schedule doesn’t get any easier, as next the Wildcats travel to Boston to challenge the Boston University (BU) Terriers. BU is 1-0 on the young season after defeating Union College 7-3. The Terriers are a fast team that has been historically good over the years, so Potulny knows what they will bring to the opposing bench.

Winning becomes contagious, and losing can also become contagious, so for us to come out and change that outcome that we had from last night [Saturday, Oct. 12] was really important,” Potulny said. “It’s going to be a little bit of a different game, because it’ll be a smaller sheet, they’re probably faster but probably not as big. We’ll have to adjust to some things in practice to get ready for their speed, but as a player you’re excited to play those games. You circle these in the summer, and you want to go out and play against the best teams.”

BU’s home ice is smaller than NMU’s, so the Wildcats will be practicing at Lakeview Arena this week to try and adjust, Potulny said. This is a great experience for this Wildcat team, and hopefully it is one that will benefit them during the tough conference season. The team’s dials are high after playing efficiently against MSU, and they will need that confidence to show to defeat a quality team like BU.

“We’re feeling really good, I think last night [Friday, Oct. 11] was a good effort. We didn’t finish the way we wanted to obviously but to split with a Big Ten team like Michigan State, that’s really good for our confidence,” Readman said. “Going into Boston we’re feeling good, and with a win on Saturday, very good weekend overall.”

Opening face-off of the first game of the doubleheader will be at 7:30 p.m. on Friday, Oct. 18 from BU’s Agganis Arena between the Wildcats and Terriers. The second and final game of the series will begin at 7 p.m. on Saturday, Oct. 19.