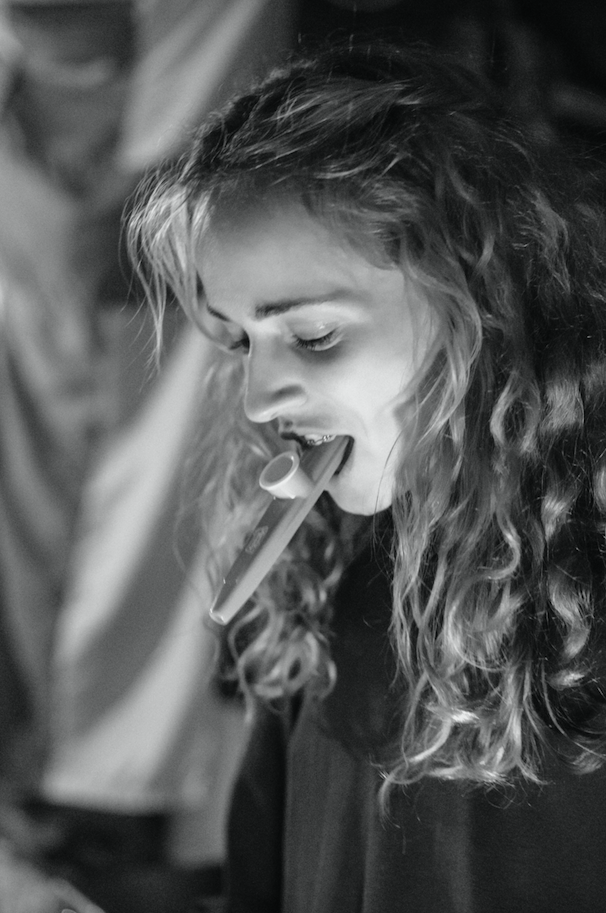 ZOO ZOO KAZOO—Senior English and psychology major and lead singer of Cosmic Sans Zoe Maki plays rhythm guitar and also dabbles in the buzzing sounds of the kazoo to add a little something extra to the group. Rachel Haggerty/NW

If you’ve spent any time in the Marquette music scene, you may have noticed most bands are male-fronted. The music industry, as a whole, has been primarily male-dominated, but a recent wave of female-fronted bands in the limelight has inspired Cosmic Sans to break down the walls of gender expectations and bring a new sound to Marquette.

“Being part of a female-fronted music project is empowering, and I feel like I have a lot of support from the community and fellow musicians,” Maki said. “I’m weary of this comment though because there are many layers that come with being a woman in a male-dominated music scene.”

The band started when Skewis was trying to find musicians to create a new sound in the local music scene. Skewis’ primary objective was to have a female lead singer. At the same time, Maki was trying to steer away from solo performances and looking for opportunities to collaborate. Within a week of the four talking about the new project, they began practicing.

“We jammed a bunch this summer but mostly just to find our voice,” Skewis said.

They have only played two basement shows and one festival. On Aug. 24, they played at Radio X’s 50th anniversary music festival. It was hosted at the Presque Isle Pavilion. They were accompanied by two other local artists Joel & the Good Boys and Blanco Suave.

“In this part of the process, while we’d love to be playing a lot of shows, we still need to buckle down and write a few more tunes,” Skewis said.

Cosmic Sans pulls inspiration from bands such as Beach Bunny, Best Coast, Snail Mail, Frankie Cosmos and Courtney Barnett, even though they experiment with many different sounds. Many of the songs are co-written with Skewis, however, Maki writes the majority of the lyrics about summer sadness, abusive relationships and female empowerment.

“I love playing with Cosmic Sans because my bandmates are talented with an endless supply of experimental creativity,” Maki said. “They make it easy to relax and feel inspired simultaneously.”

Although the band views themselves as a “fun musical project,” they hope to make more music, play more shows and record an album before members start moving away in the next year or two.

Cosmic Sans will be opening at 7 p.m. Oct. 31 for Tonto, the Bull, Rosalita and the Hips and the Thirties at The Crib’s Halloween Bash 2019. The show welcomes all ages with a $5 suggested donation. Doors open at 6:30 p.m.