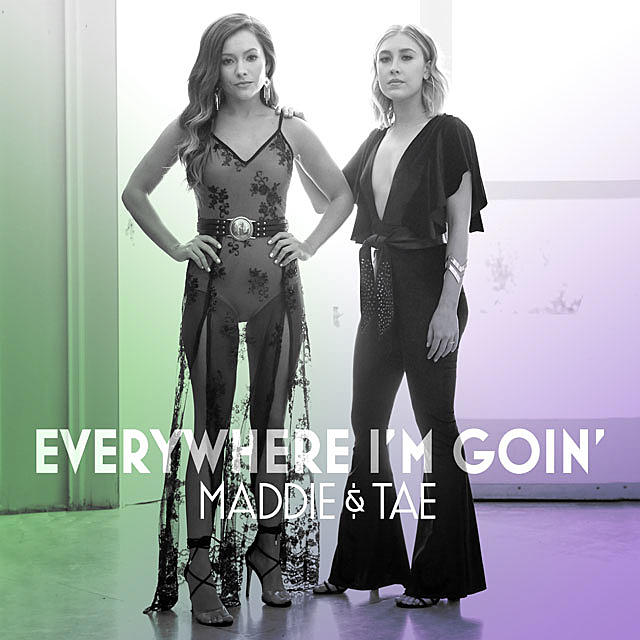 Since “Girl in a Country Song” debuted at No. 58 on the Country Airplay chart back in 2014, Maddie & Tae have been revamping the male-dominated genre, and making headlines for themselves as talented, credible songwriters and singers. The Oct. 18 release of their EP “Everywhere I’m Goin’” reveals that the country duo have been working on more than just their in-sync harmonies.

The album opens with “Everywhere I’m Goin’” and “Trying On Rings”—two songs that reflect lead singer Maddie Marlow’s real-life love story with her 15-year-old sweetheart and now fiancé Jonah Font. “Everywhere I’m Goin’” tucks in snippets of little places and metaphors that will make the coldest heart melt such as “Hard to catch like a Kansas breeze, strong like a Tennessee hickory, he’s smooth like the bourbon Kentucky makes.” Taylor Dye, or Tae, harmonizes like an angel in “Trying On Rings,” and the song itself speaks of a small-town love tale between a couple of teenagers (Marlow and Font)  who fell in love one summer and the journey to picking out engagement rings.

From love to loss, the album transitions to a bluesy number featuring fellow country singer Dierks Bentley called “Lay Here With Me.” The third track speaks to Maddie & Tae’s songwriting skills and touching romantic lyrics. Everyone is about to fall into a deep, red-wine kind of night of luscious, real country music.

When I first heard this song, it brought back a feeling of Little Big Town’s “Girl Crush” but also a touch of Tammy Wynette and George Jones’ legacy of duets with the level of intimacy between the lyrics and the delicacy of the melody. It’s a song you listen to on a dirt road, soaking up the bubbles in a tub or cuddling up on a couch with you and maybe your significant other. Anytime you listen to it, you’ll be left with an honest reflection of the purity Maddie & Tae possess.

My favorite track on the album, “Ain’t There Yet,” will speak to anyone who went through a break up. The song has a “nah-nah” driven beat in the beginning and the way Marlow crescendos those verses will give you goosies and let any broken heart know that it’s okay to feel the grief and cry over someone before moving on.

“Bathroom Floor” is the perfect girl’s-night-out tune, and the first song released off their EP. It’s a no-brainer why the duo launched their new masterpiece with a poised upbeat female anthem. Afterall, they debuted their mark in country music with a direct hit to country male singers and today’s country music songwriting stereotypes. Fun lines like “Let’s jump into a cab downtown, let a sexy man spin you around” and “No, it ain’t your fault; he couldn’t see you’re beautiful. His loss,” attests to the reputation Maddie & Tae live to uphold. Their young spirit transcends to all age groups from junior high students to 45-year-olds.

Though the EP only has five songs, this album reveals how the duo opened up to being vulnerable in the writing room and brought that same emotion to the studio. Madde & Tae have grown into powerful, dynamic singers and songwriters and this album is definitely one to add to your playlist. Having not released an album in five years, “Everywhere I’m Goin’” is the second of three parts—the first part launched earlier this year with a five-song EP titled, “One Heart to Another”—from an upcoming full-length album and shows a comeback for the duo. They’re not just pretty slim blondes, they’re incredibly talented and they have what it takes to reverse the stereotypes in the bro-dominated country music genre.