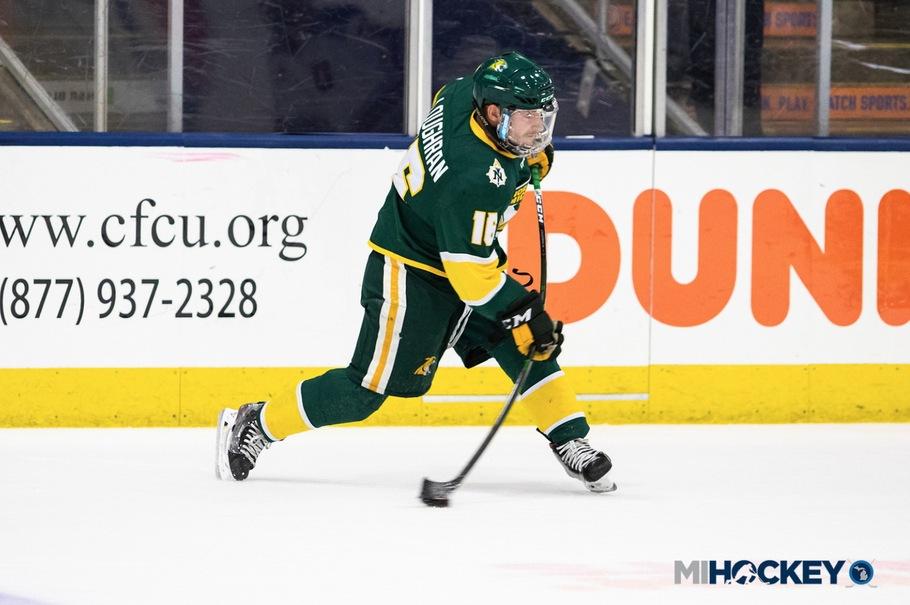 The Wildcats entered a hostile enviroment against the Boston University (BU) Terriers this past weekend, and came out with success. After trailing 4-1 two periods in  on Friday, Oct. 18,NMU scored three third period goals to force overtime and eventually a 4-4 tie. The ‘Cats had a better result on Saturday, winning 4-3 to finish the two-game series with a 1-0-1 record.

On Friday, Head Coach Grant Potulny only could hope to cut BU’s lead to just one goal so that the Wildcats had a chance to pull the goalie and tie it up in the final minutes. That wasn’t necessary however, as the ‘Cats tied the game up with 2:17 left in regulation behind the stick of Darien Craighead. The tying goal was assisted by Griffin Loughran and Ty Readman. Potulny was proud of the team’s comeback performance, and he credited it to the leadership of his captain.

Even though the game appeared to be over early, it was actually the Wildcats who got on the board first, as Joseph Nardi scored just one minute into the game. The Terriers’ offensive attack didn’t wait too long after to get going, as three goals in 12 minutes gave BU a 3-1 first intermission lead. That time span put NMU in quite the hole, and Potulny would be the first person to tell you why they were.

“I think if you look at our season, we’ve had the penalty kill. There’s the two games we have not been victorious in, one was a loss and a tie, we gave up two power play goals,” Potulny said. “The two games that we won pretty much handily, maybe the score didn’t say we won handily, but all the stats we keep did, we didn’t give up any power play goals.”

On Saturday, the team came out and played inspired hockey, and picked up a 4-3 win. The script had nearly flipped entirely, as BU kicked off the scoring in this one, taking a 1-0 lead with 14 minutes remaining in the first period. The Wildcats then scored two of its own to take a 2-1 lead at the end of the first period. The two goals were scored by Craighead and Vincent de Mey. BU tied it up in the second period at 2-2, but the Wildcats owned the final period once again. NMU outscored BU 2-1 in the third period, as de Mey scored his second goal of the night and Loughran also found the back of the net. BU tried to make things interesting with a goal late to cut the deficit to 4-3, but that would be as close as they would get.

“I think we knew we could play better, all of the stats that we were great at on Saturday, we weren’t on Friday,” Potulny said. “Hockey’s a team game, it’s not a stick-handling skill clinic, and I felt like we really played as a team on Saturday.”

The victory improved the Wildcats’ recored to 2-1-1 on the season, and it also left them one spot shy of making the USCHO National Rankings that consist of the nation’s top 20 teams. NMU has won in different ways over the past two weekends, whether it be stepping up on the defensive side or lighting it up offensively.

“It’s nice to be able to have the ability to come back in games and have the ability to extend the lead, you always hope to hold people to as few of shots as you can, but sometimes you’re going to play teams that have major league talent,” Potulny said. “They’re going to get sticks free and pucks on the net, you might have to score four to win. So having the ability to do that gives you confidence and knows you can stay alive in every game.”

This weekend brings the first conference games of the season for NMU, as travel to Big Rapids, Michigan to take on the Ferris State University (FSU) Bulldogs. FSU is 2-1 on the season after defeating Colgate University and splitting a two-game series against the University of Miami-Ohio.

“Obviously they’ve had success so far, I think watching the video they’ve adjusted a little bit how they play, which is different from what they’ve done historically,” Potulny said. “But I think the biggest indicator of why they’re having success is their goaltender (Roni Salmenkangas).”