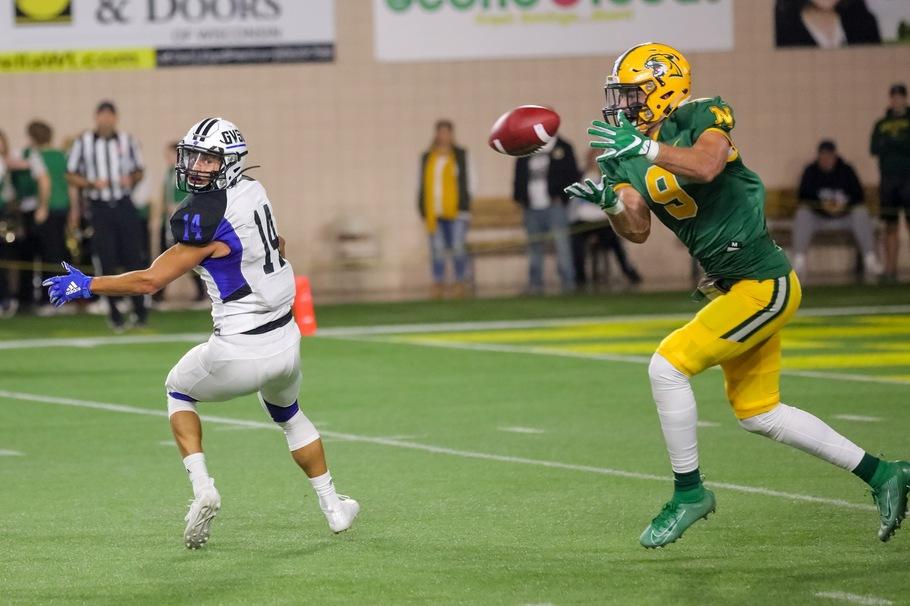 PASS DEFENSE DOOMS—NMU lost its sixth straight game of the season on Saturday, Oct. 19, when they were defeated 45-17 by Grand Valley State. Safety Brady Hanson provided one of the highlights for the Wildcats with an interception in the second quarter. Northern looks to rebound and end its losing streak next weekend against the Northwood University (NU). Photo courtesy of NMU Athletics.

The Grand Valley State (GVSU) Lakers came into the Superior Dome with the most victories in Division II history and left with another following its 45-17 win over the Northern Michigan Wildcats.

GVSU received the opening kickoff and struck five plays later out of a tight formation when two deep receivers dragged the Wildcats’ zone defenders off of Brandon Wadley’s crossing route. Laker quarterback Cole Kotopka found his junior receiver for an easy pitch and catch. Wadley did the rest, turning on the jets for a 50-yard score.

Play-action passing was the story of the game. Facing an early 14-0 deficit in the first quarter, NMU quarterback Ryan Johnson faked a handoff to freshman running back Tyshon King before delivering a 26-yard throw down the field to Ben Loutsis. The sophomore receiver hauled in the pass between two Laker defenders and the sideline to move the Wildcats within striking distance.

Three plays later on first and goal at the four, the Wildcats came out with two tight ends, two running backs, and a receiver to the left. On the snap King followed a host of blockers into the end-zone for a touchdown.

On the other side of the ball, play-action was also key. Following a 287-yard rushing performance against Saginaw Valley State, Tariq Reid was clearly the man to stop for the Wildcats’ defense. Outside of a 14-yard gain they did just that, holding the star freshman under 3 yards per carry. Unfortunately, the focus on the run left NMU susceptible to deception with three of the Lakers’ five passing touchdowns coming off of run fakes. Freshman defensive end Edward Pierson said attacking the line of scrimmage was the plan, there just wasn’t enough pressure to help the corners.

“I think we stuffed the run pretty good, it’s just the pass,” Pierson said. “We need to get better rush on the edges and when our blitz package comes in we just need to do a better job of getting in there.”

Coach Kyle Nystrom made a point to mention that the Wildcats struggles against the pass is part of the price to pay with a youth movement. Three of the four corners on the Wildcats depth chart Saturday were true freshmen.

“How many coverages do they play in high school? Two at the most? Really our corners are playing in the neighborhood of 5-6 coverages,” Nystrom said.

It wasn’t all doom and gloom for the Wildcats, though. Sophomore safety Brady Hanson killed a scoring opportunity for the Lakes with a huge interception at the end of the first half. Facing third and long on NMU’s 28-yard line, GVSU lined up with two receivers to the right in a shotgun set. On the snap, slot receiver Jacob Miller ran a post route to the middle of the field and Hanson saw his opportunity.

“We were in a zone coverage on the left side so I just dropped back and I saw him break inside, so I broke inside,” Hanson said. “(I) looked for the ball and the quarterback looked like he underthrew it a little bit so I turned around, turned back and I capitalized.”

Following his third pick of 2019, Hanson flipped the field for the Wildcats with a 69-yard return. The turnover gave NMU a chance to score points of their own to close the first half.

“I was just trying to get six points on the board for us,” Hanson said.

Late in the game, a few other Wildcat defenders made a huge play. With GVSU  at their own 15, Kotopka received the snap on second and 10, and both of NMU’s inside linebackers came on the blitz. Sophomore Jack Reiger met the left tackle while senior James Brown looped into the open gap and hit Kotopka’s blindside. The Lakers’ quarterback had no chance as Brown knocked the ball from his hand. Reiger made the most of the forced fumble with a scoop and score to bring the game to its final 17-45 score.

This week the Wildcats are on the bye, Nystrom said getting healthy in time for Northwood is the big priority. Injuries have been a major factor along both the offensive and defensive lines. Things have gotten so dire at running back that sophomore slot receiver Cullen Heimburger received six carries last Saturday, a career high.

“This is a much needed bye, we’ve got to prepare for Northwood and get some bullets back in our gun and get back up and running,” Nystrom said.