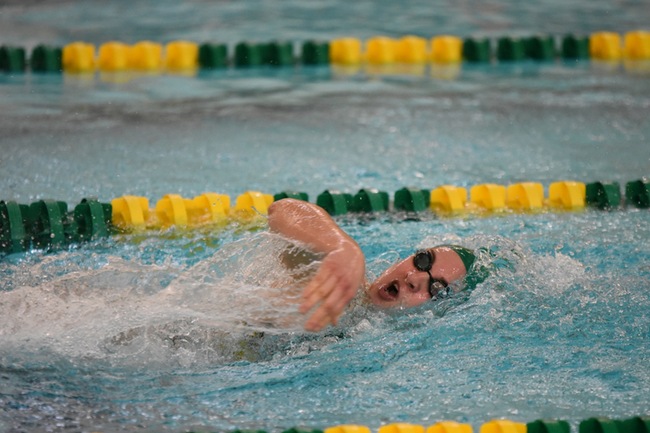 ALL ABOARD—NMU Swim and Dive is on the rollercoaster to NCAA Championships as its tough stretch begins. Photo courtesy of NMU Athletics.

Head Coach Heidi Voigt believes that everybody on the team is aware of how big of a competition this is, but the tough match-up doesn’t waiver her confidence.

“I feel pretty good, we can win more events then Grand Valley, it should be a good competition,” Voigt said.

In the last four years, NMU has competed against GVSU with success. The men’s team is 2-2 and the women are 3-1 in the dual meets. With their performances last week, senior Rachel Helm and freshman Ondrej Zach won GLIAC Athlete of the Week awards. This is the second straight award for Helm and seven overall in her career.

The ‘Cats have a quick turnaround at 11 a.m. on Saturday, Nov. 2 when they battle Saginaw Valley State University (SVSU).. Coach Voigt believes that this is a very important competition since this is where the conference championships will be held this year and it is important for the freshman class to learn the pool and learn the boards.

“Our freshman class has done really well so far, and these kids are really special and working with them is really fun,” Voigt said.

“We established ourselves as a really good GLIAC team and we are getting better each year,” Voigt said. “Our goal is top 10 in the nation and winning a conference championship, it has been the goal for the last couple of years.”

The Wildcat will hit the GVSU Pool at 5 p.m.