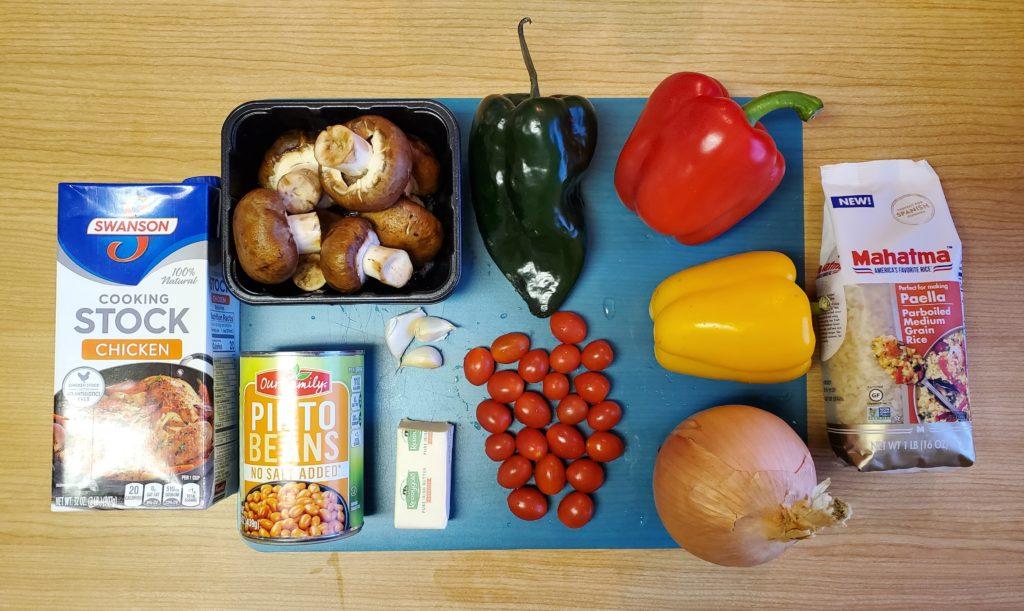 Modern paella recipes have roots traceable to 19th century Spain, remaining consistent with its use of regional meat such as rabbit, along with rice and saffron. At its base level, this is what separates a paella from rice-based stir fry. Well, saffron is expensive, and unless you have time to go hunting, rabbit is off the table. So for this recipe, vegetables were the focus—bringing out a variety of textures and flavors to make the ultimate budget paella.

A budget paella requires sacrificing saffron, which is a quintessential spice in traditional renditions of this dish, and at $17 for 0.06 grams, far out of the recipe’s price range. Poblanos replace the traditional fennel because this recipe’s author prefers the flavor and snap the pepper adds. The walls of a poblano are sturdier than a bell pepper and have a high water content that allow them to hold their crunch through the simmering. Fava beans require a separate pot to hydrate and cook before being added to the paella, whereas canned pinto beans do not.

Before turning on the stove, dice one white onion. While this may seem like a lot, it acts more as an aromatic base for the recipe since it will cook down to thin translucent pieces. Add 3 tablespoons of butter—or olive oil, for vegans out there—to a pan over medium-high heat, then add the onions and stir occasionally.

The poblanos, red and yellow peppers, and mushrooms need to be cut into thin strips approximately one-fourth inch wide. If you don’t have a garlic press, this is when you would want to mince the garlic. After the onions have cooked for 5 to 8 minutes, add the rest of the vegetables and press 2 to 3 cloves of garlic into the pan and stir. Add 1 tablespoon of salt, 1 teaspoon of pepper, 1 teaspoon of smoked paprika, one-half teaspoon of curry powder—hot or regular, and one-fourth teaspoon of cayenne. Stir into the vegetable mixture and let cook for five more minutes.

While the vegetables cook, cut half a pint of grape or cherry tomatoes in half and set aside. Measure out 2 cups of chicken stock—vegetable stock, once again, for vegans out there. Measure out 1 cup of short-grained rice and add to the vegetable mixture and let toast for two minutes. Add the vegetable stock and the tomatoes, mix gently, and let simmer over medium-low heat until the majority of the stock has been absorbed by the rice. It’s incredibly important to not stir the mixture while it is simmering. A film of pure, concentrated flavor will form on the bottom and edges of the pan to be incorporated only once the stock is absorbed.

The consistency should not be runny nor should it be thick. A good visual indicator is that all of the liquid clings to the rice and doesn’t run off and create a pool, but is still creamy and thick enough to hold things together. Strain and rinse a three-fourths cup of pinto beans and add to the paella. Let the beans cook over low heat for another 5 to 8 minutes. Add salt to taste, and voila, you’ve made a paella.

This dish is excellent for a group of friends and stores well, so make it on a Sunday and heat it up all week long.