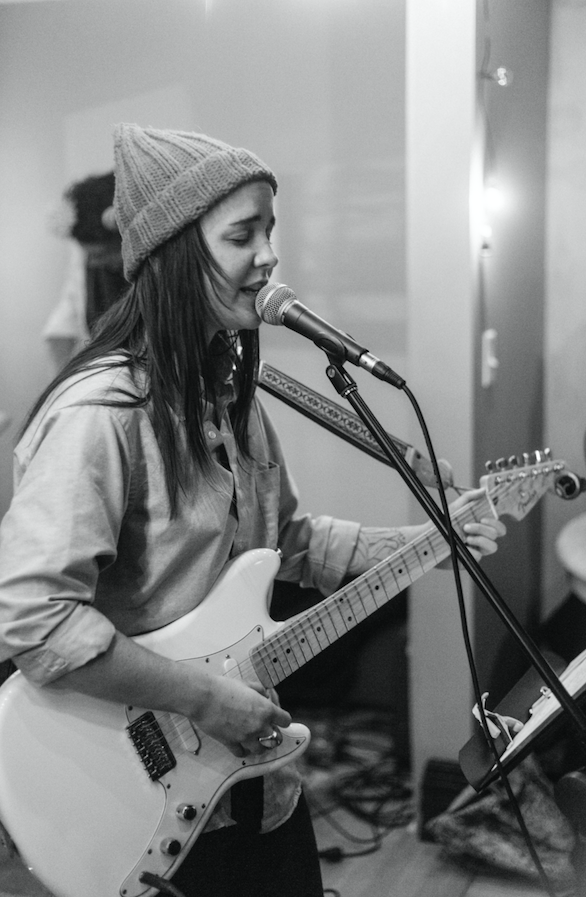 SWINGIN’ TO THE RHYTHM—Chelsea “Sawftsea,” of Rosalita and the Hips, contributes to the band’s alternative rock sound on the electric guitar and vocals during a show at The Crib on Thursday, Oct. 31. Rachel Haggerty/NW

Walking into the big house at the corner of Third and Arch Street, a customer of The Crib is immediately welcomed into a tight-knit community and homey atmosphere. There are two stories of comfy furniture to relax or do some studying on. There’s always a friendly face waiting to take your order of either coffee or maybe something a bit stronger from the house’s full bar.

Crappie Coffee Roasters founded by couple Nicole Alexander and Dave Grant started off as a small wholesale roasting company practically based out of a garage, but they wanted more. With the help of head roaster Dylan McKenzie-Trost and general manager Emily Wegemer, The Crib, a coffee house and new home to the roasting company, was officially opened nearly a year ago on Nov. 15, 2018.

“It’s an old Victorian house that was built in the 1890s and so we want it to feel like a home where you’d want to sit down for a while and have a good cup of coffee with some friends,” Wegemer said. “That’s the vibe and aesthetic we want. We’re pretty no fuss, no nonsense. We’re not too fancy and we like focusing on the coffee.”

Since the beginning they have been striving to fill their house with a large variety of interesting events like cribbage night every second Tuesday of the month and low-fi study beats by Blanco Suave DJ, Jollygood every other Thursday.

“We’ve been getting into different kinds of events, the NMU Conservation Crew is doing workshop series here. So once a month they come in an take over usually the upstairs,” Wegemer said. “We have a conference room upstairs that’s available to be reserved free of charge year round. So people will come reserve that place for meetings or for study groups.”

After growing up in the area and being involved in the music scene here since a young age, McKenzie-Trost had his own vision for The Crib when Crappie Coffee Roasters moved in.

“As soon as we walked into that building a lightbulb went off in my head and I was like ‘We definitely need to have shows here,’” McKenzie-Trost said.

Not long after the official opening of the house, The Crib was approved for their liquor license and integrated a full bar with beer, wine and cocktails to add to the versatility of the environment. Once everything was finished setting in, Mckenzie-Trost began booking small concert or shows.

“We get some out-of-towners, it’s mostly local, but I’ve got a lot of friends and connections around the country. Like in the summertime we had some bands from Chicago come up and that was pretty cool. Anyone who wants to come plays is welcome,” McKenzie-Trost said.

As of late The Crib has been averaging about one show a week. True to Mckenzie-Trost’s vision, the venue provides mostly local musicians a “punk-rock DIY ethos” where anyone is welcome and people pitch in what they can. Donations are often encouraged and they always go directly to the musicians themselves.

The Crib will be hosting a singer-songwriter showcase form 8 to 10 p.m. on Friday, Nov. 8 featuring Troy Graham, Brandon Good and Niikah Hatfield. There will also be The Crib’s One Year Anniversary Bash featuring Blanco Suave and $2 coffee drinks all day on Friday, Nov. 15.