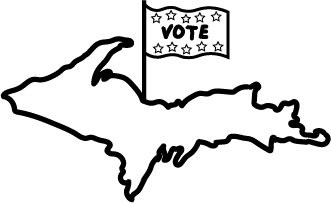 To recap the past Nov. 5 election for Marquette City Commission, youth dominated the votes.

Bonsall is a Harvard University graduate and is now the youngest elected commissioner this year at just 23 years old.

On the other hand, Lorinser plans to continue on with his degree here at Northern while serving as commissioner. He’s in his 30’s and the first Muslim elected official in the entire U.P.

So what will the two do as city commissioners? The commission is part of the legislative branch of city government and its intent is to reflect and represent the residents of Marquette, in this case, establishing policies and approving budgets. If you’re interested in sitting in on one,  public meetings are to be conducted at least twice a month by law.

Many believe it’s important and impactful that there is a younger generation in office because they are relevant with the next generation, which is also their own.

This country was built with the idea that every person has the ability to create change and that extends to all age groups.

The system, though intimidating to some, doesn’t work unless all people are represented.

Having younger people running for office has brought a number of different changes to the United States. It all starts locally.

Having you involved in the voting process, especially local politics, makes a big difference. You never know what might happen.

Both Bonsall and Lorinser are working together for affordable housing and this will be the first action taken once sworn in on Tuesday, Nov. 12.