Evolving to Revolve around successful creatives 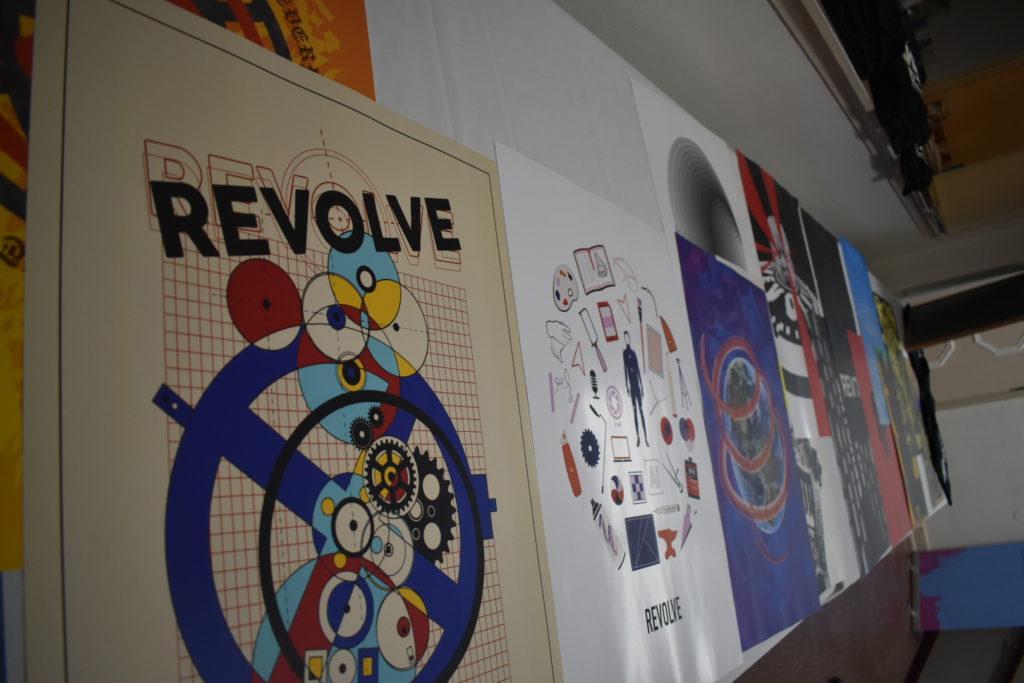 POSTERS FOR SALE—Graphic design students created posters based on the theme “Revolve” to raise sell at the conference for $15 apiece. The profits were split between the conference and the artists. Photo courtesy of Keegan McGonigal

All throughout the quirky Masonic Center’s arched hallways roamed creative minds from many backgrounds. Through the maze of hallways, Revolve CC graphics were plastered on posters, projectors and T-shirts. There were three active rooms for speeches and demonstrations, a room for Marquette Makers vendors and a front desk to purchase merchandise.

Event Executive Director and Art and Design Professor Keith Ellis was one among nearly 100 people to walk the halls of the conference.

“Everyone seemed jazzed. Everyone seemed interested,” Ellis said. “I have had so many people come up to me and thank me for the event and give me some feedback too, which is also welcome.”

For a first-time event, Ellis said everything ran very smoothly and there were no big surprises, just minor hiccups like audio-video problems. The creator is always the biggest critic and Ellis said the price of the event could use some improvement, but they had to start somewhere.

“It actually exceeded my expectations in a lot of ways. The quality of the speakers, the engagement, the space all went extremely well. People were motivated and interested, I had several people say they talked to people they never talked to before,” Ellis said.

There was a decent mix of students, professors, community builders and local creatives and a variety of ages and occupations. Many of those in attendance stayed for half of the 12-hour conference or close to two-thirds, Ellis said.

Some of volunteers working the event were art students involved in the creative club at NMU called Anchor Point, including junior graphic design major Jalen Sims.

“Overall, I think it was super good, super cool to bring to Marquette because nothing like it has happened here before and it’s getting people from all over the place here to talk about creativity,” Sims said.

Attendance was a little lower than hoped for, but Ellis almost expected that saying it’s hard to attract attention when “unproven.”

Ellis along with the three other directors of the event plan on bringing it back to life next year and hopefully make it an annual event.

“This was a need we all personally identified and willed into power, and that to me is kind of remarkable on its own,” Ellis said.

Now that the event has made its inaugural appearance the group has something to show to people to build onto next year.

“I think it can only get better. This year I think it was already super successful, there weren’t many problems at all, and I think it went super smooth,” Sims said.