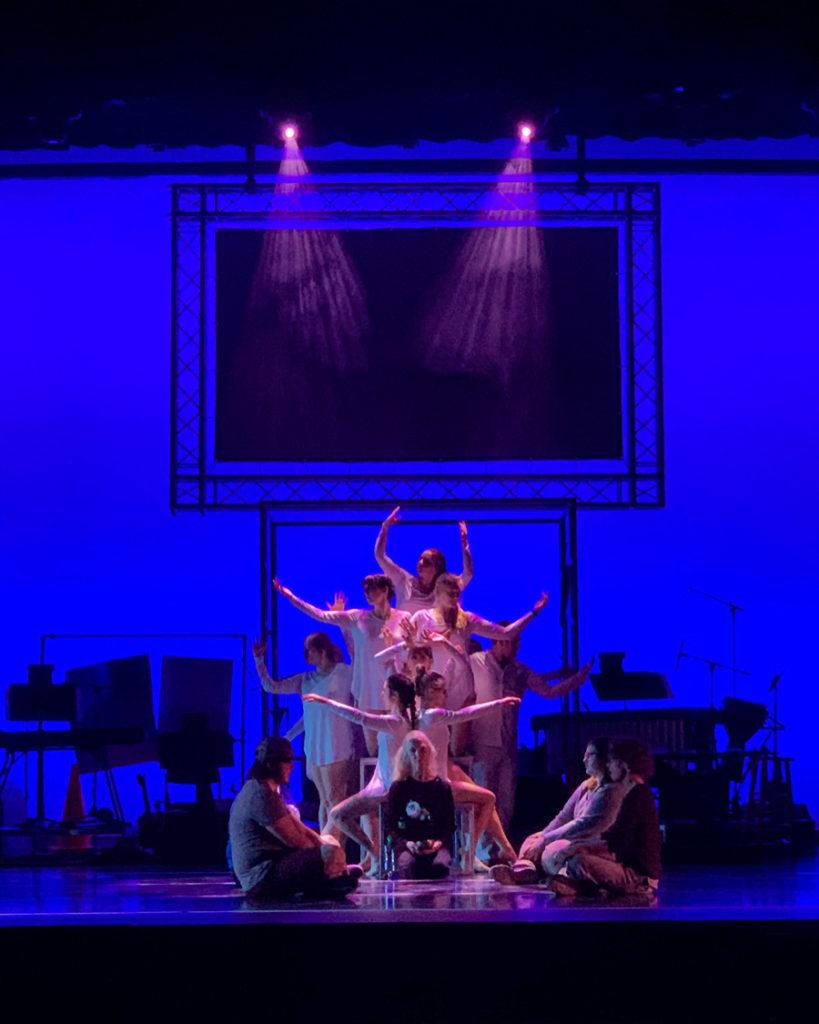 Think about your loved ones. What will the environment look like for them in the future? Picture your favorite place. What will the landscape look like 30 years from now? The producers of “What We Leave Behind” challenged audience members to answer these questions. Rooted in dance, the performance incorporated film, live music and narration to address climate change.

Presented by Co/Lab Collective, Creative Director Jill Grundstrom brought the script of a TED Talk to life that NMU professor Jes Thompson performed in 2018. The performance ran from Nov. 8 to Nov. 9 at the Forest Roberts Theatre.

Thompson’s research focuses on the legacy of national parks and how stories of majestic mountain peaks and glaciated valleys are becoming just that—memories. In addition, she advises on how to talk about climate change in respect to the places you love and with the people you love.

“It’s a hard subject to breach because some people either don’t believe our climate is shifting or don’t want to believe the climate is shifting. So, this is a non-threatening way to present the facts to the audience and they can take it and run with it,” Grundstrom said.

In one of the opening acts, dancers sat in a half-circle around a bewildered Thompson, who recently learned about the impacts of climate change. In her efforts to spread the word, Thompson asked things like, “Do you know about ocean acidification?” to seated dancers. But with each scientifically-loaded term, they recoiled and fled as if Thompson spewed a disease. Their resistance to listening  illustrated Thomson’s message that we need more conversations about climate change that are productive and that move people to a solution, she said.

Van Grinsven “reduces the clutter” of complex scientific information for a living, and said the production presented things he can’t always bring into his lecture. If audience members couldn’t connect with Thompson’s narrative, supplemental dance, music and visuals carried the weight, Grundstrom said.

In Imax style, large screens surrounded the audience, showing an underwater scene of Lake Superior while the song Mad World played live on the xylophone. Dancers slinked across the stage in an amoeba-like blob and bellowing percussions created a sense of impending urgency. Reflecting Thompson’s words on how the climate is changing, dancers moved in strong and eerie ways—distorting their dance under flashing red lights. Acting as the physical embodiment of Thompsons TED Talk, the dancers turned messages about climate change into the “most gorgeous movement,” Thomson said.

“They do it with such finesse and integrity, it’s been an honor to work alongside these students. I was blessed to be a part of this conversation and blessed they took my words to movement,” Thompson said.

A main segment of Thompson’s speech was on altered water cycles due to warming temperatures. Stacked in a glacier-format, dancers creating cooing and creaking sounds reminiscent of melting ice—the kind Lake Superior makes in springtime. A video of sagging glaciers illuminated the room from the screens. During this act, Thompson explained Marquette has warmed 2.7 degrees in the past 50 years. A looped video of rain displayed as dancers rapidly patted the stage, magnifying the events of the Father’s Day Flood that ravaged Houghton in 2018. A cacophony of noise and white light blazed into the audience, then dancers fell back into blackness, symbolizing the destruction the flood caused.

This method of multimedia storytelling came at audience members from many angles, and junior environmental science major and EcoReps member Andrew Gessen admitted he was “totally overwhelmed.”

“It was awesome. It goes to show the severity of the issue and sheds a different light on it. It’s very easy to attach the ecoterrorist and doomsday [labels] to it, but we need to see something light like this that’s informative and interesting. It can really change the way you see this issue,” Gessen said.

The number one source of climate change information is from family and friends, Thompson said, while images of friendly faces popped on the screen. Thompson said she works to undo the generational mistakes so they don’t snowball onto the next generation.

“I hope people walk away from this saying ‘I can do things that are totally easy and are going to make my life more enjoyable. I can start taking responsibility for my actions from here on out so that other people don’t have to take responsibility for the mess that we’ve left them,’” Thompson said.

The only thing the performance left behind was audience members that filled the Forest Roberts Theatre lobby, buzzing with conversation on how to make a change.