Pride of the North 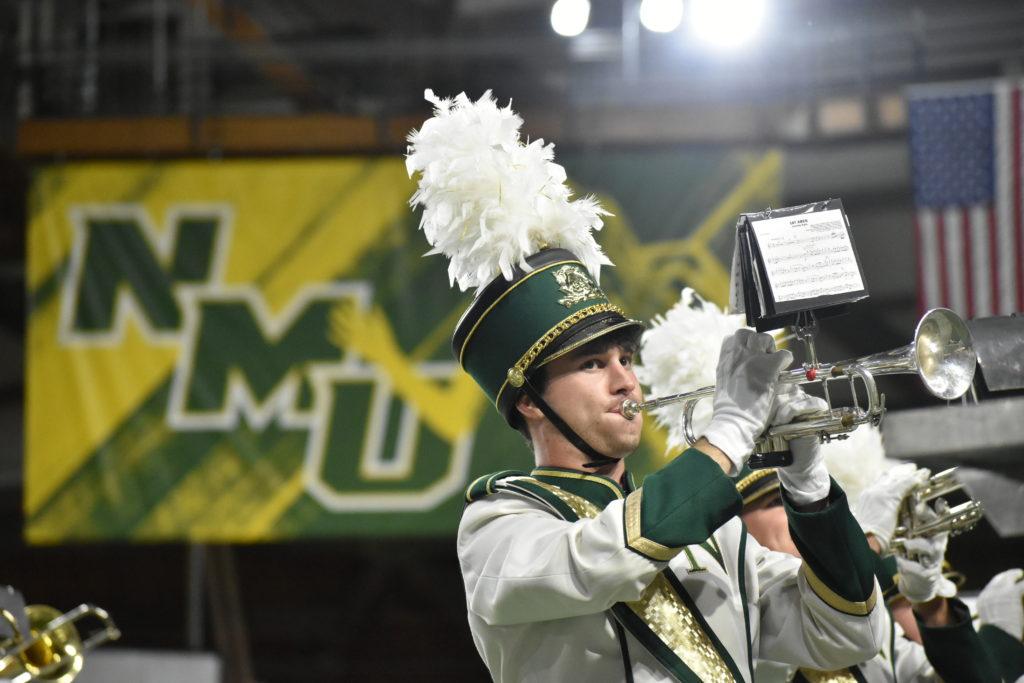 Before and during every home football game, over 100 students with a wide range of talents march the Superior Dome’s field to show the audience just what the Pride of the North looks like.

The marching band at NMU is a place for musically talented and spirited students to come together to perform and show their support for the university. The marching band’s season is centered around the home football games and special events on campus, which means it officially came to an end at the last game on Saturday, Nov. 9.

Senior Madeline Gabka has been with the marching band for three years and worked her way up the ladder—starting with second chair trumpet, then trumpet section leader and this year becoming drum major.

“I think that overall it was a really good season. It was really weird for me because this was my first time ever being drum major. So it was definitely a big learning experience for me during band camp,” Gabka said.

Music Associate Professor and Director of Bands Stephen Grugin has been conducting the NMU marching band for 23 years.

“Every year I think that year is better than any of the ones before, but this was a special season and the band performed really well—they all just seemed to have a great time,” Grugin said.

In the last show of the season the seniors come together to pick their favorite music for the performance.

“I definitely think that was our best show. That was just the best that the band looked overall, pregame and halftime we looked the best we did all season for sure,” Gabka said.

Every year the season begins with band camp where a lot of the learning, training and bonding comes together. During this week-long camp right before the beginning of the fall semester, traditions are born. At the end of the week the band hikes Sugarloaf Mountain together and shares stories at the top.

“It’s such an emotional time because the seniors really talk about the impact the band has had on them. People cry, I definitely cried a lot this year when I got to talk to the band about how it has really changed me as a person for the better,” Gabka said.

“I definitely like to say that the band is like a family. I remember my first season here coming to band camp feeling very nervous because I didn’t really know anybody and it is really awesome that all the drum majors in the past have been really welcoming and very open,” Gabka said.

Gabka described the role of the two drum major positions as counselors for the rest of the band members that help run rehearsals.

“I learned to be really loud because when there’s 120 people and you’re trying to say commands you have to project a lot. But it really helped my problem solving skills because there is some drama in band, you can’t really escape that. Trying to find a solution and trying to help people come to an agreement on things, that is a very valuable lesson I learned,” Gabka said.

As the season continues the band can forget the fundamentals of marching like posture and being loud. The drum majors help lead moral of the group to finish the season strong.

New traditions are being created all the time. This year Gabka was the first drum major to be featured during halftime while she spun her mace—the staff held by drum majors. Marching band has created an opportunity for her to try new things.

“I like to consider myself an extrovert but there are times when I get nervous around people that I don’t know and I’ve learned to be out of my shell,” Gabka said.

During performances it is very obvious that these students enjoy what they’re doing and have a passion for marching. Former band member Seth Milano finds his passion by photographing his old bandmates.

Milano became injured last marching season and began his photo journey with the band then while being sidelined.

“It definitely helped to already know people in the band because that made it a lot easier for me to take photos of them. When you get a better feel for your clients it really helps the process,” Milano said.

Taking photos for the band was a good way to get experience for Milano while still being able to be with his friends.

“I realized that when you get smiles in a picture it makes the picture a hundred times better. It’s always a great picture when you get genuine, candide smiles and so that was something  focused on during the end of the season,” Milano said.

Though Milano is no longer a member of the Wildcat Band he is able to recognize and appreciate the musician’s hard work through his photography.

The band also noticed Milano’s time commitment to them and his passion for photography, and at the end of the season surprised him with a new lens to shoot with. An act of kindness like that speaks volumes to the kind of people in this group, he said.

In reflection of her last season, Gabka recalls her experience as drum major as almost dream-like.

“I’m very happy that I was in the band. It was a very big honor for me to be the drum major. If you told me several years ago in high school that I would be in the marching band in college and one day be the drum major,” Gabka said. “I wouldn’t have really believed you because that’s crazy.”