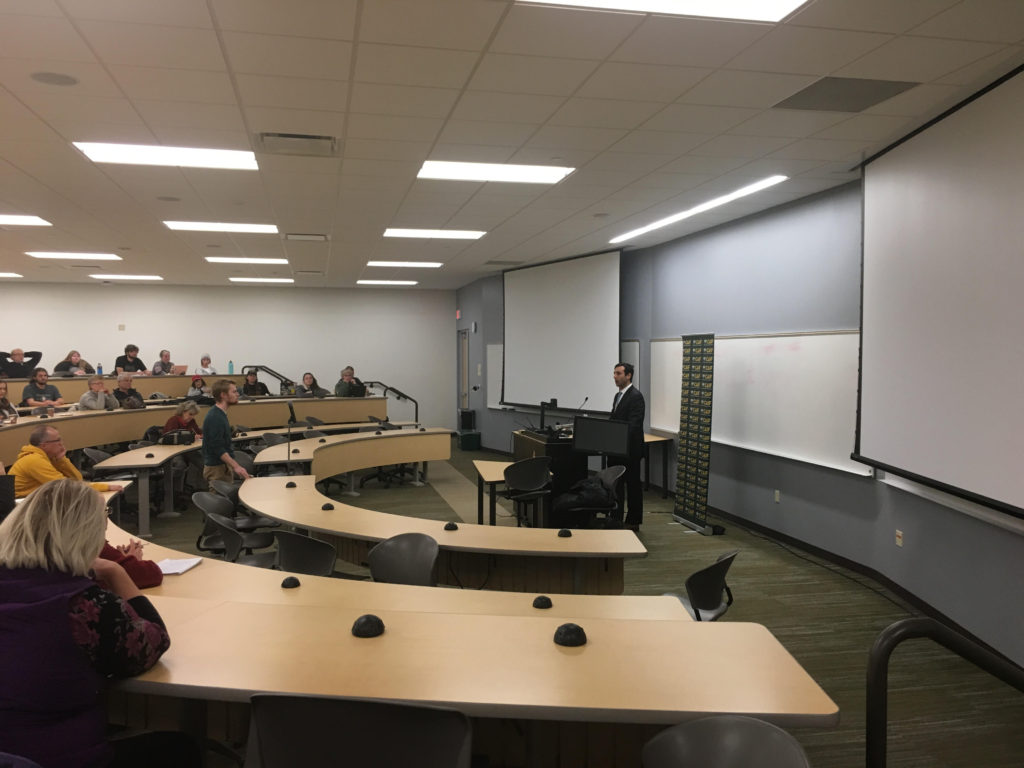 Milikh’s evening talk, sponsored by both the College Democrats and College Republicans student organizations, was free and open to the public.

Milikh, a member of the Heritage Foundation, which is a conservative think tank, presented somewhat controversial views on the heated topic of hate speech in today’s world.

Centrally, Milikh argued that restrictions on hate speech would severely limit free speech in America. He explained that he saw this criminalization or ban on hate speech as entirely possible in the country’s future and gave reasons for why he had concluded this would be harmful to the nation.

“You’re laughing until it becomes the law,” Milikh said.

Milikh dealt with restrictions already placed on speech in this country in the past, various arguments for the continued freedom of speech and arguments made for the banning or criminalization of hate speech today. He spoke of identity politics as a large problem contributing to the issue at hand.

He also dealt with international and historical examples of hate speech restrictions, one of which was Germany’s hate speech laws leading up to the Holocaust.

“If you think hate speech laws can stop the rise of the Third Reich, that’s crazy. It was a speed bump,” Milikh said.

His talk was followed by an extended Q&A session in which Milikh engaged with students and community members’ queries, beginning with those of College Democrats and College Republicans student representatives.

The two political student organizations had a formal dinner at the Chophouse with Milikh the previous night, during which they discussed political issues. The discussion continued during the Q&A session when students and community members engaged Milikh regarding points of agreement and disagreement with his views.

“Poll after poll, every category is not in favor of hate speech laws. Do you think perhaps you’re gaslighting at all, considering that 50,000 Americans are going into medical debt this year…Do you think you’re gaslighting this as an issue that’s not really an issue?” sophomore political science major Mathew Fahey, a College Democrats representative asked.

Other interlocutors, in contrast, shared Milikh’s fear for the future.

“How do we deal with these disagreements of identity in the public square before it’s too late?” freshman Doug Zvosec, a member of the College Republicans, asked.

Milikh’s discussion will be followed in the coming academic semester by another hate speech  focused presentation to be given by Nadine Strosser, former head of the American Civil Liberties Union.

Both talks are part of the CAIF’s year-long “You Gotta Love Hate Speech” series, CAIF Director and English Professor Gabriel Brahm said jokingly. Strosser will be speaking from the opposite political perspective of Milikh.

“We hope that this series of talks on hate speech will stimulate people to be more thoughtful about the importance of free speech and to be more vigilant about respecting and defending it,” Brahm said.