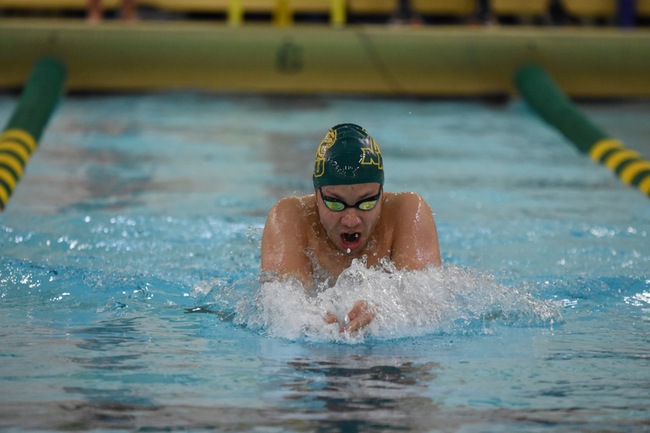 The Northern Michigan University Men’s and Women’s Swim and Dive teams are getting ready for their biggest challenge yet this season: the Calvin College Invitational where they will be competing for three days.

In last year’s invite, the men got first place out of six teams and the women got second out of eight teams.

“I am very confident in this team, our team is driven to succeed and it shows in practice both in the lap pool and the dive well,” Assistant Coach Matthew Williams said.

This week, the Wildcats are ranked seventh and 11th in women and men in the nation, respectively, and are ready to make a splash on the weekend of Friday, Dec. 5 through Sunday, Dec. 7.

In their last meet, both teams won against University of Wisconsin-Stevens Point (UWSP) by a significant margin. The women won 207-86 and the men were also victorious, winning 191-104.

“The UW-Stevens Point meet was an opportunity for our athletes to try some different events and we were surprised how well our team performed during a heavy training cycle,” Williams said.

In five events, the Wildcat women team finished in first and second. Maria Arakelian won the 1000 yard-freestyle with a time 10:43.12 and Nicola Pasquire finished only three seconds behind with a time of 10:46.75. In the 200 yard-freestyle, Fransesca Gastrow and Emma Love finished first and second with times of 1:58.28 and 2:02.27. In the 200-yard butterfly, Meritxell Font Cantarero and Katherina Springhetti finished with times of 2:08.46 and 2:22.88. In the 50-yard freestyle, Maggie Vaitkus and Maddy Irelan finished in the top two with times of 25.23 and 25.44. In the 200-yard backstroke, Jenna Joerger and Gabby Spajic finished with times of 2:10.58 and 2:17.42. Mary Groosman and Jamie Kimble contiued NMU’s success with the top two spots in diving, and earned NCAA B-cuts.

On the men’s side, Ondrej Zach and Erikas Kapocius won all of their individual events. In the 200-yard freestyle, Amillo Escobedo and Jonas Reinhold captured the top two spots with times of 1:44.79 and 1:44.94 in a tight finish. In the 50-yard freestyle, Lajos Budai got first with time of 21.19 and Amir Samam Khajegi got second with 21.79. Michael Biclawski was right behind in third place with a time of 22.33. Budai also won the 100-yard butterfly with a time of 51.81, and Micah Currie and Ryan Leach got first and second in the 1-Meter board. The team wound up winning 14-16 events.

Collegiate swimming has a heavy practice load and a long season, it does get mentally and physically challenging over the course of the season and the month of November is the hardest part of the season. It is right after all the dual meets and before finals week, and the first big meet of the year for the Wildcats. Williams talked about how important it is to keep the athletes rested.

“We try to mix things up at practice and add activities outside the pool such as spinning, Yoga and Zumba,” Williams said. “It’s important to keep it fresh and know when people need a mental break.”

Williams added that they’re also working with Professor Derek Marr in the Health and Human Performance Department on the mental side of performance. Both teams look to stay fresh and keep the winning going when they travel to the Calvin College Invitational on Friday, Dec. 5.