NMU falls to No. 2 Grand Valley in GLIAC tourney 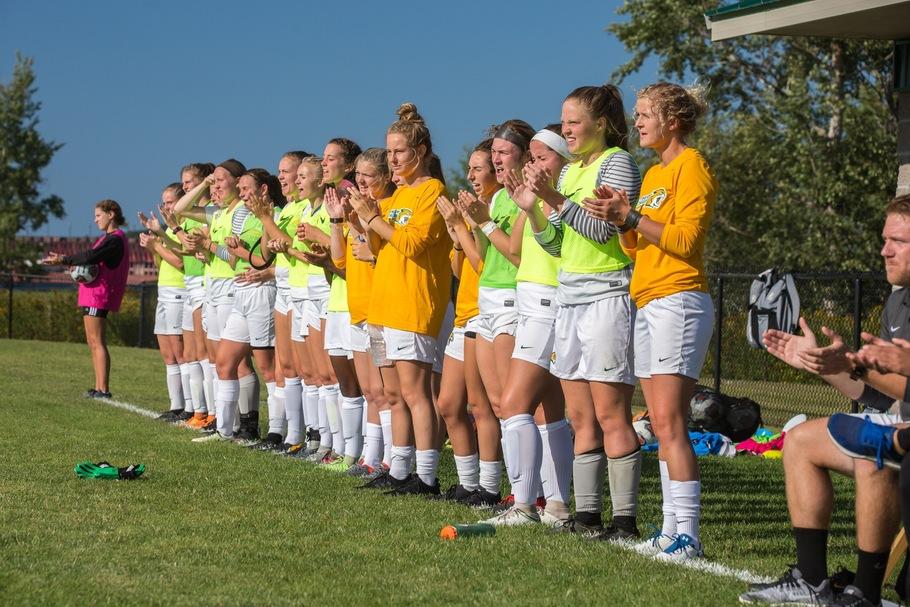 'CATS SCORE ON GRAND VALLEY—Though the outcome was not what the Wildcats wanted in the GLIAC Tournament against Grand Valley State, NMU was the first conference opponent to score on GVSU this season. Photo courtesy of NMU Athletics.

The Wildcats played Michigan Tech University on Friday, Nov. 8 in a rivalry game where the winner would be the eighth and final seed in the GLIAC Tournament. In a close game, NMU picked up the 2-1 victory over Tech to make the tournament, and defeated the Huskies for the second time on the year. The game was played indoors in the Superior Dome, and Head Coach Sonia Basma thought that gave her an advantage.

“It was awesome, being in the turf I think definitely worked in our favor. We’re a turf team, we played five turf games this year and won four of them,” Basma said. “So that was an awesome feeling, and to beat Tech twice in a season is awesome too. It’s always a battle.”

In a game where Senior Day was celebrated for the Wildcats, the seniors delivered. Senior forward Jaime Montgomery scored the game’s first goal to put NMU up for good. Senior defender Gaelin Hirabayashi put on the finishing touches with a goal in the 59th minute to give the ‘Cats a 2-0 lead. Tech would score six minutes later, but NMU hung on for the 2-1 victory over their U.P. arch-rival. The home victory clinched the eighth seed in the GLIAC Tournament, but they had to go up against the first seeded Grand Valley State University (GVSU) Lakers who are ranked second overall in the country.

GVSU had not given up a goal in conference play en route to the GLIAC regular season championship. However, the Wildcats changed that in the tournament when Rachael Erste scored in the 83rd minute. NMU might’ve lost 5-1 against a tough Lakers squad, but they made history in the process. Basma said she was proud of how hard her girls played overall.

The Wildcats end the season with a 5-13 record, but they ended the year by making the conference tournament. With the offseason upon them, Basma is now looking towards the recruiting trail. Not is recruiting important, but so is replacing the key seniors that are now graduating.

“One of the biggest things in the offseason is all about recruiting, to make sure that we get out there and get really good players,” Basma said. “Our senior class, We’ll be losing two very, very special players. Two very special leaders I could say, that’s going to be very hard to replace.”

Basma said you can always replace players on the field, but you can’t replace personality and leadership.

“We’ll keep at it, and I have faith that a lot of our younger players can step up to the plate and fill those shoes,” Basma said.