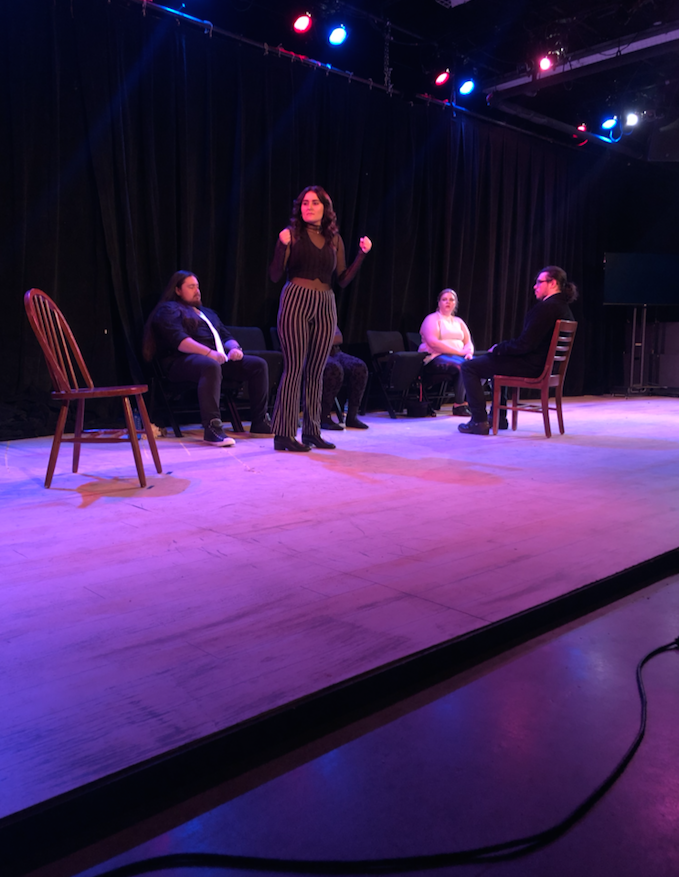 Lined up in chairs in front of a black backdrop, five seniors sat in the intimate dim-lit Black Box Theatre to deliver a few of their favorite and more polished performances.

Senior theatre majors following the performance track are required to take TH480, the theatre senior capstone class. This year was the first time that the graduating seniors came together and performed a cohesive set of individual pieces they’ve been working on.

Senior theatre major AJ Stephens was one of five seniors to perform on Monday, Dec. 2, while senior theatre majors Emily Baker and Jacob Stripe were also in the capstone class and worked as technical directors on the showcase.

Stephens has been in many productions during her four years at NMU including “The Full Monty,” “Secret Garden,” “Sweeny Todd” and many more.

“I’ve learned to not put a stigma on roles I could play and just be more open minded to different roles,” Stephens said. “I think a lot of people go into auditions having a role in mind that they think that they could play, but it’s really up to the director and what they want to see you do.”

Each of the seniors performing in the showcase was required to do a comedic, contemporary, dramatic and traditional monologue and if they were in musical theatre they could also perform a solo or duet.

“I have a monologue from ‘This Is Us,’ the TV show, that I did and I think having an audience in front of me made me get more emotional but it’s just a monologue that I can connect with really well,” Stephens said. “It’s something that I’ll be able to, in future auditions if they ask for something like that, I can just pull it out and do it.”

Reflecting back at the performances she’s done in college, Stephens fondly remembers “Sweeny Todd” performed in the fall of 2018.

“The biggest thing that honestly the whole program as a whole is going to remember is our performance of ‘Sweeny Todd’ in the fall of 2018,” Stephens said. “I had the honor and privilege to play Mrs. Lovett alongside Paul Truckey. I think that was one of the biggest learning experiences for everyone because we had a Broadway veteran with a bunch of us college students.”

One of Stephens’ favorite performances of the evening was the one she shared with her sister.

“Singing with my sister is always a treat we did a duet from ‘Smash,’ the TV show, and that was really fun to be able to sing together because this might be our last performance together,” Stephens said.”

Theatre Professor Paul Truckey and Theatre Department Head Bill Digneit instructed the capstone class that met twice a week during the semester. When the seniors selected what pieces they were going to perform, Truckey began directing the show layout.

“We want them to go toward their strengths. They could present a brand new piece if they wanted to, something they’d been working on,” Truckey said.  “Which was the case with probably half of it were pieced that they had never done before and other ones that were strong that they wanted to recall.”

There were 25 individual pieces throughout the show that were spaced out so the performances transition smoothly from musical theatre pieces to different genres of monologue.

“A lot of the material is drawn from what they’ve done over the years in class work and in performance work on the stage,” Truckey said.

The students put a large amount of time and effort into these pieces over the years so that they are now prepared to start careers in the theatre performance industry.

“What this does is it builds a portfolio for them so they have materials that they are strong with that they could go out and use in auditions in professional settings,” Truckey said.

Stephens was featured in the showcase with Audree Stephens, Tanner Parish, Nick Salin and Sabrina Nelson.