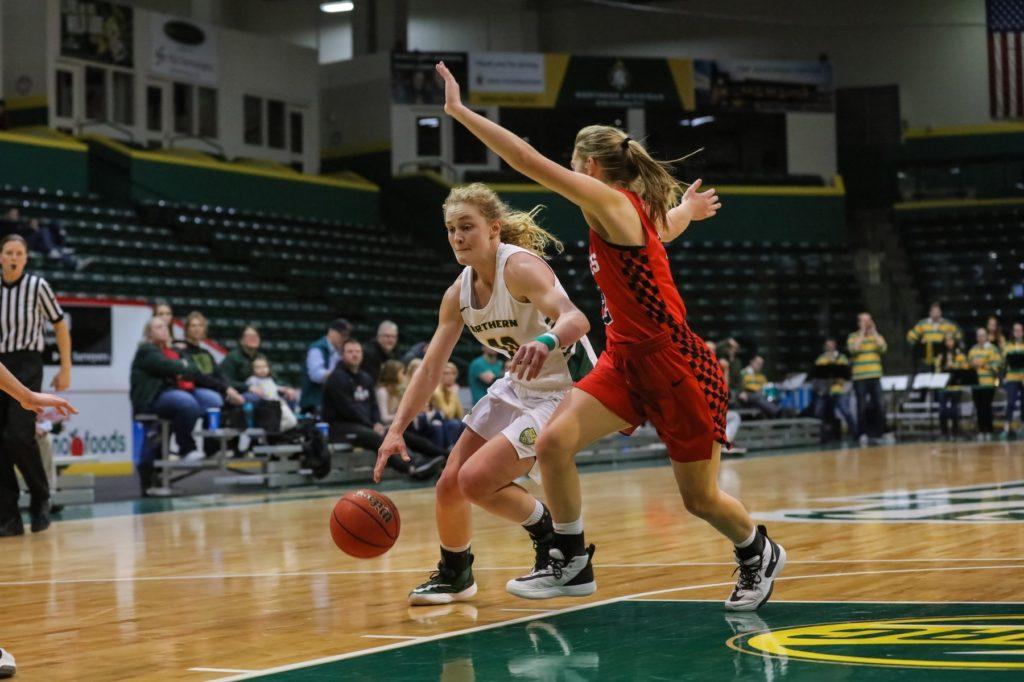 INJURIES HALTING WILDCATS—Junior guard Lexi Smith drives to the rim during NMU’s 55-53 win over St. Cloud State University on Saturday, Nov. 23. Smith has been battling injury for a couple of weeks. Photo courtesy of NMU Athletics.

After winning two homes games a week prior, the NMU Women’s Basketball team traveled to Springfield, Missouri for the Drury University Thanksgiving Tournament.

The Wildcats came up short in both contests, and dropped to 3-5 on the season just before conference play begins. This also wasn’t an average trip, as two winter storms with the games in between made the trip harder than it had to be.

“It was a grueling trip, it wasn’t easy,” Head Coach Troy Mattson said. “[There were] major delays and missed flights.”

The ‘Cats faced off with the Truman State University (TSU) Bulldogs in the first game on Friday, Nov. 29. TSU jumped out to a 22-11 lead after one quarter of play, and NMU couldn’t fully recover. The final three quarters were tightly contested, but the Wildcats fell 67-52.

Senior forward Erin Honkala continued her strong start to the season with a double-double of 16 points and 11 rebounds. Senior forward Jessica Schultz also chipped in with nine points and four rebounds, the Wildcat frontcourt is off to a tremendous start to the season. Injuries in the backcourt have forced others to step up, as freshman guard Makaylee Kuhn scored eight points off of the bench.

Things didn’t get any easier for Northern, in fact they played the No. 1 ranked team in the country Drury University (DU) on Saturday, Nov. 30. DU hosted the event, so the Wildcats had to play on the road against the top ranked team that bounced them from the NCAA Tournament a season ago. To add injury to insult, NMU’s two starting guards sophomore Elizabeth Lutz and junior Lexi Smith both didn’t play.

DU is as advertised, as they knocked off the Wildcats by a score of 72-44. NMU started off slow once again, where they found themselves trailed 20-10 after the opening quarter. The ‘Cats played the second quarter close and trailed 38-24 at halftime. However, the Panthers outscored the Wildcats 20-6 in the third quarter en route to the 28-point win. Honkala had another good game for Northern, scoring nine points along with eight rebounds. Tied with her for the team lead was sophomore forward Emily Mueller, who had nine points and three rebounds. Mattson was impressed with his basketball team’s fight in that game, especially since he felt they lacked that in the loss to TSU.

“We didn’t play well the first night, we looked a step or two behind on everything we were trying to do. But I do give the girls credit against Drury, without Lexi or Liz playing, we played hard,” Mattson said. “That was the first step we needed to do, because we weren’t able to play hard the first night and we played really hard the second night.”

The beast that is the 20-game GLIAC schedule returns on Thursday, Dec. 5 for the Wildcats, as they host Northwood University (NU) inside the Berry Events Center. Mattson said NU is tough and will play the Wildcats physical. As the marathon of the season continues on, Mattson knows the importance of winning home games and bringing effort to the court every night.

“We need to go out and protect our home court, we need to play well like we did last weekend here, and hopefully things will go well for us,” Mattson said.

In the second game of the weekend, NMU will host Saginaw Valley State University (SVSU) on Saturday, Dec. 7. The Cardinals are 4-4 on the season, but as Mattson says once conference play starts, records get thrown out the window and everybody is 0-0.

“We’ve got a long way to go, we’ve got some things we need to figure out here in the next couple of days and as I look at it we’re 0-0 starting conference play, so it’s a fresh start,” Mattson said.

The Wildcats and Timberwolves tip-off at 7:30 p.m. from the Berry Events Center in the first game of the weekend doubleheader.