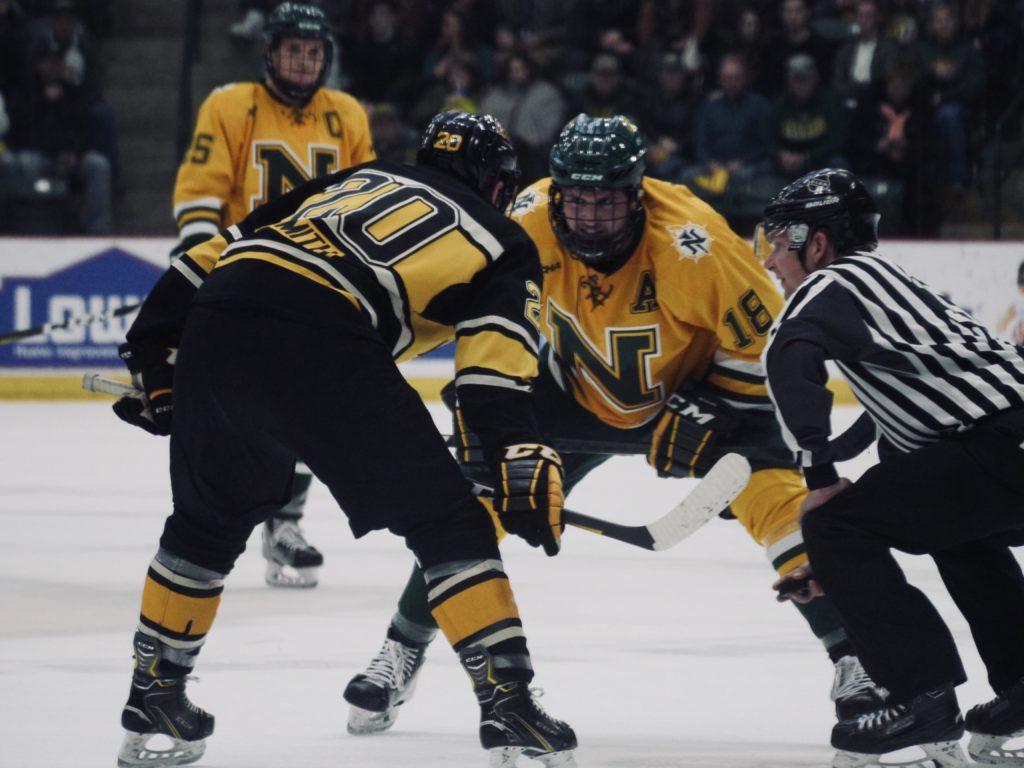 MUCH NEEDED VICTORY—Junior forward Joseph Nardi awaits the face-off during the Wildcats’ home loss against Michigan Tech University (MTU) on Saturday, Nov. 23. After losing four straight games including two to MTU, the ‘Cats won the second game of the doubleheader against Alabama-Huntsville. Photo courtesy of NMU Athletics.

After another slow start in the series opener, the Wildcat Hockey team walked out of Huntsville, Alabama with a split against the then winless University of Alabama-Huntsville (UAH) Chargers.

In the first game on Friday, Nov. 29, NMU trailed 3-0 at the end of the first period. Freshman goaltender John Hawthorne was pulled after the Chargers’ third goal with five minutes remaining in the period in favor of sophomore Nolan Kent. The Wildcats could never fully recover from the bad start, and even after a couple of goals from junior forward Joseph Nardi and sophomore forward Grant Loven, they came up short in a 4-2 loss. Despite outshooting the Chargers 29-22, the ‘Cats fell on the wrong side of the scoreboard.

The game marked UAH’s first win of the season and a fourth straight loss for NMU. Associate Head Coach Byron Pool talked about the feeling of losing a tough game like his team did.

“Obviously a disappointing weekend when you go into a situation where you feel like you should come away at least with the opportunity to win a couple games,” Pool said. “You look at games like this throughout the season and hope that it’s not one that’s going to hurt you in the end. It just felt that on Friday night we weren’t ready to play.”

In the series finale on Saturday, Nov. 30, the Wildcats came out with better energy, Pool said, and a comeback wasn’t needed in this one. Sophomore forward Garrett Klee gave NMU a 1-0 lead en route to a 3-1 victory. UAH tied it up in the second period, but less than a minute later senior forward Luke Voltin lit the lamp for the game-winning goal. Sophomore forward Vincent de Mey put the finishing touches on the game an empty-net goal in the final seconds for the two-goal win. Even though the game went down to the wire, the ‘Cats outshot UAH 35-17 in a dominant effort.

“On Saturday, I thought the guys responded really well,” Pool said. “We probably didn’t show up on the scoresheet quite as indicitive of how well we played, obviously it was a very tight hockey game. But we had multiple, multiple chances and was really happy with the effort and how the guys played.”

Kent had another solid outing in net, saving 16 of 17 shots. In total on the weekend, the goalie gave up only two goals in over five periods of action.

“I thought he was solid, anytime your goaltender only gives up one goal it doesn’t matter how many shots you give up, you feel good about it,” Pool said.

The team now has this week off before returning back to the Berry Events Center on Friday, Dec. 13 and Saturday, Dec. 14 against No. 1 ranked Minnesota State University-Mankato (MSU). Due to a different number of circumstances, Pool said the bye week is coming at a good time.

“It’s coming at a good time obviously with the injuries and we have some other guys nicked up a little bit,” Pool said. “And with finals around the corner, it gives our guys a chance to hopefully get ahead with their academics.”