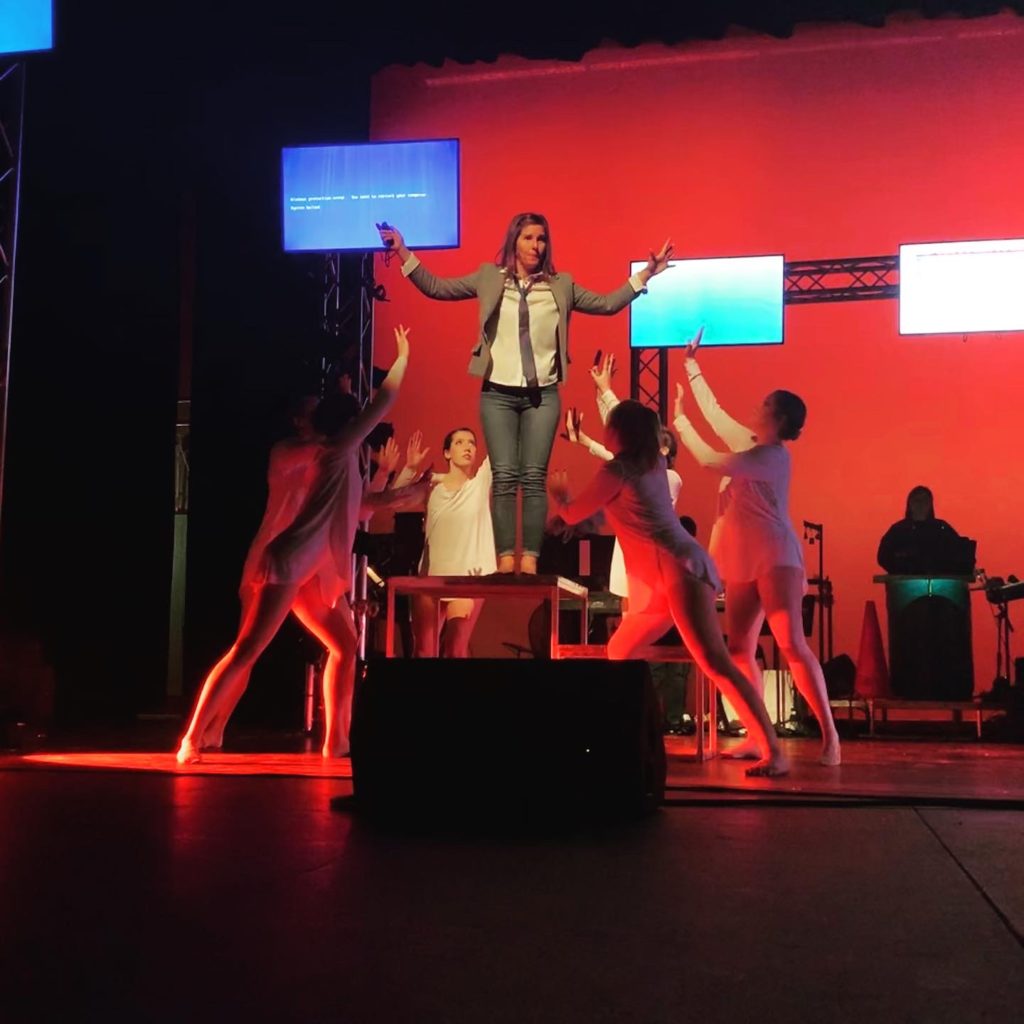 NEON GLOW—Dancers had a lot of personal stakes in the performance, as they helped assemble and deconstruct the structure. Director Jill Grundstrom said this heavy involvement from all production members made it even better because they understood how the entire process works.

We are of the age of change. This is the message the NMU theatre production of “What We Leave Behind: Addressing Climate Change Through Dance” sought to illustrate. In a collaborative performance, dance, live music and media met to supplement a lecture on climate change communication. Originally performed in November at the Forest Roberts Theatre, the production had the opportunity to showcase their message to a larger crowd.

On Jan. 9, the NMU production performed at The Kennedy Center American College Theatre Festival (KCACTF) in Madison. A national theatre program, the KCACTF involves 20,000 students from colleges and universities, according to their website. As the festival is more theatre-oriented, NMU’s production was one of the first to be selected that was more dance and music-driven.

A TedTalk by NMU Public Relations Professor Jes Thompson set the stage for the performance. With this script, a team of over 30 dancers, stage management and tech crew, media designers and musicians gave physical shape, sound and sight to Thompson’s words.

The production inspired change in audience members, as they buzzed afterwards about creating their own climate-focused show, Director Jill Grundstrom said.

“Respondents on the National Board for the Kennedy Center [said] some of their students were already talking about ways to minimize their carbon footprint and make changes in their own life,” Grundstrom said. We also heard it was inspiring to students to see what other students have created. We may have opened Pandora’s box a bit.”

The opening performance at the KCACTF elaborated on how students are the ones who have to take action, said junior entrepreneurship major and dancer Gracie Fries. She explained the message made them feel at home, as the core of the performance is on changing the conversation about climate change.

“After performing with Jes and hearing her research, [she] has helped me continue her story and give her message to others who may feel stuck in this overhanging issue of climate change. It’s a daunting topic that can weigh you down,” Fries said. “Being able to walk myself through the steps of improvement helps me not be so overwhelmed and communicate it to others easily.”

Everything that’s come out of Thomson’s 18 years of research is that the way we communicate science isn’t working. The climate conversation needs to come in simple, small bites so people have space to process the message and relate it to their life, Thompson said. And then they start to see a change, bit-by-bit.

“One hundred different decisions got us into this mess, it will take 100 different actions to get us out,” Thompson said.

Fries explained she doesn’t always know the simple steps to take to further the community, but the production was the gate opener to learn about those actions. By showing Thompson’s knowledge through dance, it made the difficult conversation easier to breach. Senior English writing major and dancer Charlie Edwards agrees.

“For many topics it can be easy to sweep them under the rug because we don’t want to talk about them,” Edwards said. When those topics are merged with something we love—theatre and dance—it makes them easier to talk about.”

Visuals of undulating Lake Superior waves and smiling faces of NMU students were projected on screens that surrounded the audience, and climate statistics about the Upper Peninsula were presented by Thompson. Since audience members were from regions encompassing Indiana, Michigan, Wisconsin and Illinois, Thompson added it was hard for them to connect with the hyper-local stories.

Regarding the future of the production, if it were to be scaled-up to a national stage, Thompson said the stories would have to change to reflect a more generalized audience.

“Since it’s so hyper localized, it needs to live as is. Local stories of places that people love and live in—matter. If we scaled it up, we’d have to scale it to stories that also resonate with people,” Thompson said. “There’s going to be a time when everyone has a climate story. When we keep it as the lowest common denominator, it doesn’t connect in the emotional overwhelming way we were striving for.”

This production has initiated change at a local and regional level, as it set a precedent at KCACTF and opened the door to keep collaborating across campus, Grundstrom said.