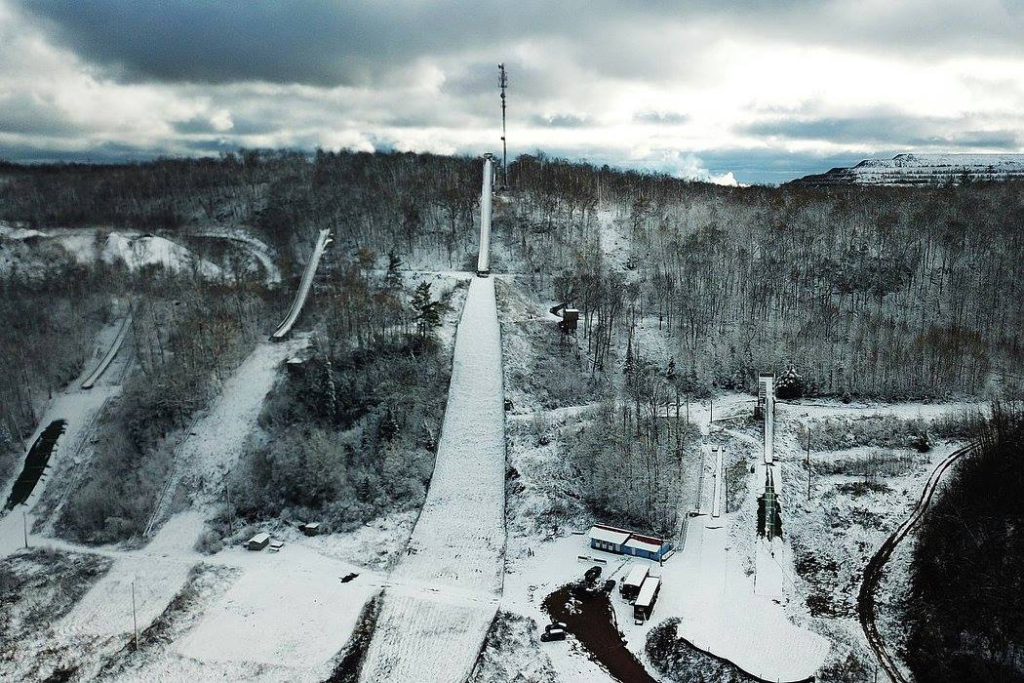 CALM BEFORE THE STORM—In less than a week’s time, the Suicide Ski Hill will be filled in full force for the 133rd Annual Ski Jumping Tournament. With the track as peaceful as can be, it is ready for primetime. Photo courtesy of Ishpeming Ski Club.

The new year has brought about resolutions for many, and as always, the U.P.  likes to bring in more snow. Though if it weren’t for the fresh-falling flakes and snow mounds, how else would the Ishpeming Ski Club host their Annual Suicide Ski Hill Ski Jumping Tournament for the 133rd time?

The Ishpeming Ski Club Head Coach Gary Rasmussen, and Chief of Competition, organizes the ins and outs of the tournament year-round, which will be taking place at 6 p.m. on Tuesday, Jan. 21.

Rasmussen grew up skiing and had olympic history within his family. He started ski jumping at the age of 13, which was the youngest on the team at the time. He was a member of the ski jumping team at NMU before the NCAA dropped the sport. He then served as head coach of the Olympic Training Center team at NMU, Rasmussen said.

Today, it’s quite common in downward skiing to see kids hitting slopes as young as two or three years old, and the same ages are making 13 and 25-meter jumps at the Suicide Ski Bowl in Negaunee. In fact, Rasmussen said that the Ishpeming Ski Club is now a junior world qualifier, meaning jumpers will compete to be a part of the U.S. team for world champions in Europe. Out of about 20 jumpers who participate in this opportunity, usually only 3 to 6 make it through, depending on what the talent looks like.

The Suicide Bowl has five different jumps consisting of a 13, 25, 40, 60 and 90-meter hill. Rookies and those of a younger age practice on smaller hills—and the sport is able to continue during the summer as well, by practicing on plastic—while the tournament takes place on the 90-meter jump. This is also considered to be an “olympic normal hill,” Rasmussen said.

“The record on that hill is 326 feet. We’ll have a number of skiers jumping well over 300 feet, which is the length of a football field,” Rasmussen said. “If you’re standing and watching people jump that hill, it’s hard to imagine that it actually is as long of a jump as the length of a football field. The strongest-armed quarterback in the history of the NFL has never been able to throw a ball that far. It’s mind-boggling.”

Upon approaching the tournament, you’ll drive along a snowy tunnel-like path due to surrounding trees. Before no time, up ahead, an elongated ski hill will greet you on entrance and stare you down. You’ll fight for a closer spot to park, but just can’t wait to get out of the car with your comfy jacket, winter accessories and a comforting mug of hot cocoa to cup in your hands next to friends around a bonfire. Tailgaters holler from their trucks, enjoying a cold beer or a hot dog from the concession stand up ahead. Tents cover booths showcasing vendor items and souvenirs. But most of all, jumpers soar through the air, catching eyes, camera clicks and gasps from their family members. These jumpers have come to this very spot from around the country and even the world, Rasmussen said. These locations include, but are not limited to, neighboring Americans from the East Coast and Colorado, and range as far out as Finland and Slovenia, he said.

In the tournament, there are different categories and classes. The “U-20” class is for both competing men and women under the age of 20. Then there’s the senior class, which includes anyone over the age of 20, Rasmussen said.

The students and community here at NMU have many opportunities and ways to get involved in supporting this event, Rasmussen said. Of course, simply showing up does wonders, because  the admission fee of $15 (or $20 at the gate) is the primary fundraiser for all the programs that the Ishpeming Ski Club is able to host. But there is always a need for volunteers to do a variety of projects, like grooming their cross country trails, ensuring the protocol of the jumping hills and even conducting fundraisers, he said.

In this area of the U.P., there are many different ski hills and communities that are keeping the sport alive and well. They all try to help each other out, out of respect for the sport, while remaining unique to their location and what they offer as a business operation. But other than the jumps in Iron Mountain, nothing else compares to the venue our neighbors in Negaunee have, Rasmussen explained.

“We have the need for volunteer help that never ends,” Rasmussen said. “So if somebody really wanted to come out and be a part of the club, all they have to do is contact [us]. But financially, we’re always trying to run fundraisers and just showing up for this event, buying a button, getting in and buying a hotdog goes right into helping us run the club.”