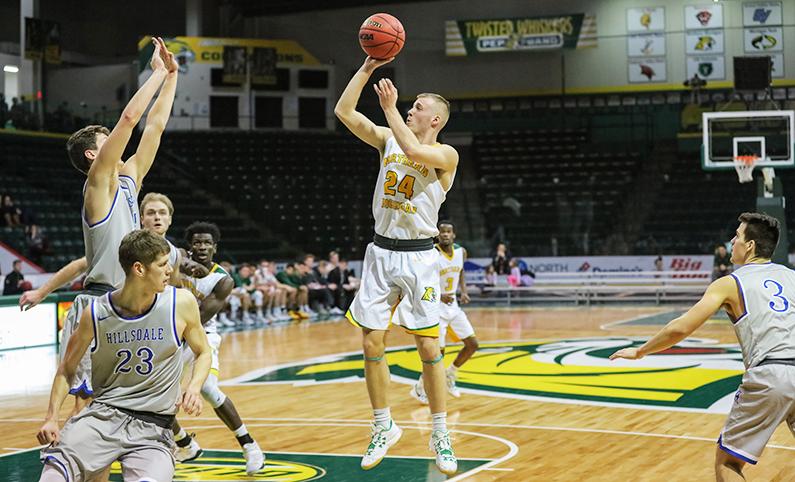 BIG GAMES FOR ‘CATS—Junior guard Alec Fruin goes up for a floater during a 70-52 loss to Hillsdale on Thursday, Dec. 19. The Wildcats have improved since then and the toughest five-game stretch of the season is about to begin. Photo courtesy of NMU Athletics.

Looking ahead at the schedule, the NMU Men’s Basketball Team is going into a tough stretch to finish off the month of January.

The Wildcats begin that tough slate against not just one of the best teams in the Great Lakes Intercollegiate Athletics Conference (GLIAC), but against No. 8 ranked 17-2 (6-1 GLIAC) Ferris State University (FSU) at the Berry Events Center on Thursday,  Jan. 16.

“Ferris State is one of the best teams in our conference, they have a chance of winning a national championship this year,” Head Coach Matt Majkrzak said. “They will try to keep the pace up but we want to play slow, take care of the tempo and force turnovers. If we want to win this game, we have to force them to play our style.”

Two days later, the ‘Cats return to action at the Berry to host 6-9 (3-4 GLIAC) Lake Superior State University (LSSU) on Saturday,  Jan. 18. The Wildcats are 3-1 thus far in January, and 7-8 overall. Its GLIAC record of 4-3 puts them in a tie for fifth place out of 12 teams. The race to the GLIAC Tournament is starting to heat up, but there are still 13 more conference games to play, and the only way is up for the Wildcats. With a younger team, some growing pains were to be expected.

“I am happy with our progress. Almost every week we got a little bit better,” Majkrzak said. “Starting 3-1 coming out of break, seeing our guys putting the extra work in, these are all good signs.”

It has been a rollercoaster for the Wildcats in the past few games, beginning with the buzzer-beating 64-61 win against Michigan Tech University (MTU) on Sunday, Dec. 15 that marked three wins in a row against MTU dating back to the beginning of 2019. NMU followed up that great performance by getting clobbered by Hillsdale College 70-52 on Thursday, Dec. 19, and losing to Division III Ripon College 80-75 on Saturday, Dec. 21. After a week off for Christmas, the Wildcats were back to business. NMU rebounded by winning two conference games at home against Ashland University 74-61 on Thursday, Jan. 2 and a low-scoring 58-55 game against Wayne State University on Saturday, Jan. 4. Wildcats kept the momentum with a road split with a 81-67 win against Purdue-Northwest University and a 78-60 loss against the University of Wisconsin-Parkside.

“We came out of the Christmas break with a better competitive spirit and went 2-0 at home and 1-1 at road. Our players didn’t seem content,” Majkrzak said. “That is a good sign, that shows us we are growing.”

After this weekend, the brutal conference schedule continues for NMU, as its next four games are on the road. The ‘Cats travel downstate to take on Davenport University (DU) on Thursday,  Jan. 23, the team that handed FSU its first conference loss. The ‘Cats then have a quick turn around before facing No. 14 ranked Grand Valley State University on Saturday, Jan. 25. The Wildcats round out the month by taking on Saginaw Valley State University (SVSU) on Thursday,  Jan. 30, and start February at Northwood on Saturday, Feb. 1.

“We are looking one game at a time at this point, but this five game stretch to finish off this month is the hardest stretch we have all season,” Majkrzak said.