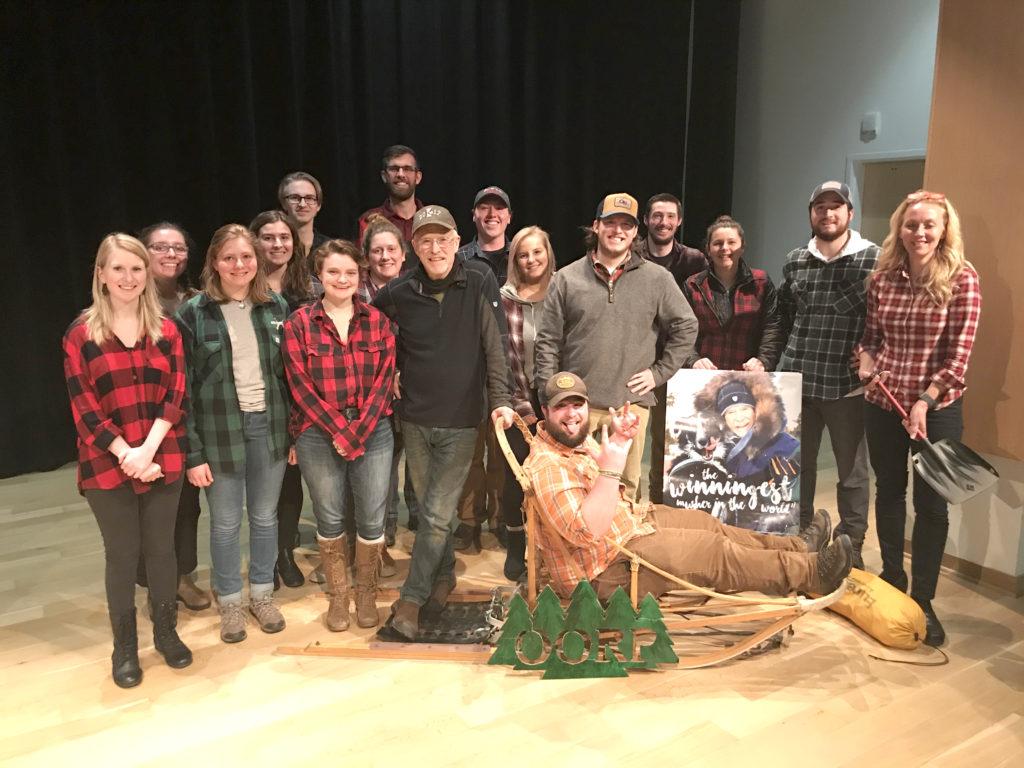 Ben Bures/NW TEACHING GREATNESS­—Jeff King (center) engages with students from the Center of Student Enrichment that helped bring him to NMU to tell his stories. He teaches students about the importance of perseverance in the face of adversity during his speech in Jamrich Hall on Tuesday, Jan. 28.

The cold weather of the U.P. and the extreme outdoor sports it allows entices those adventurous enough to pursue the terrain—mushing, for example.

Students and community members intrigued by this winter sport came together to fulfill their curiosity about the adventures of the most successful musher in the world. Holding 28 first place titles, four of them from the Iditarod Trail Sled Dog Race, Jeff King spoke at NMU on Tuesday, Jan. 28 about his collection of passionate stories from his near 200,000 miles behind a dog sled.

Having spent 30 long years mushing in the harsh Alaskan wilderness, King’s speech was filled to the brim with stories of perseverance and compassion, which he first shared in his autobiographical book, “Cold Hands Warm Heart.”

Tyler Fine, senior outdoor recreation major and president of the Organization for Outdoor Recreation Professionals (OORP), along with senior outdoor recreation major Luke Dubbins, inquired about King coming to campus two months ago when they were considering mushers NMU could host on campus. They decided that King would be the ideal musher, because of his SISU spirit and the close timing with the UP 200 race, a qualifying sled dog race for the Idatirod held in the U.P. in February.

A handful of factors pushed King into grabbing the reins of sled dog racing. Growing up one block away from a world-famous dog training facility in California and being an avid reader of adventure books fed his fascination with being self-sufficient and living in a rural place, King said. Thus, he transplanted himself closest to the source of his passion: Denali National Park in Alaska. He first heard about the Iditarod through a Sears radio with antennae in the trees, and he remembers thinking, “If someone else can do it then I can too.”

By his second winter in Alaska, King acquired a small team of dogs, some of them stray, from the local villages 20 and 30 miles away. He decided to live in a tent 90 miles off Parks Highway to get started, much to the disapproval of his parents in California, but this didn’t stop him.

“I’ve always been a little cocky about my ability. There were years and years I just thought ‘I’m going to be the one to win the race.’ I was figuring stuff out and I knew I was getting better,” King said.

After 30 years of vast trail and the sound of his panting dogs, King said mushing has taught him the value of being humble.

“People and dogs [are] counting on you to keep your perspective right. You want to be proud of your actions, your team, and the people around you. You know, I want to be proud of me more than I wanted to win the race and I’m not sure that’s the way it was when I started,” King said.

The most important piece of advice King wanted to share with attendees is that success is not a given.

“Be relentless, don’t demand success, just keep trying and working and finding out where your place is and to be fair to other people, to your dog, to your community and enjoy it because it’s not a given,” he added.

A major factor in Kings success is his compassionate relationship he has with his dogs that many consider him to be “the winningest musher in the world.” He views this dynamic between him and his team of 12 dogs much like a professor-student relationship. Some students you get along great with, and others not so much, King said.

“I have dogs that whether or not I’m particularly in love with them is not necessarily indicative of how good they are. In general they’re all really motivating because they make me feel good and they like me, so how could you kick when you got a team of twelve dogs wagging their tail at you,” King said. “Really you can do no wrong.”

Now reaching the tail end of his career, King hopes to “squeeze out” a few more years of mushing.