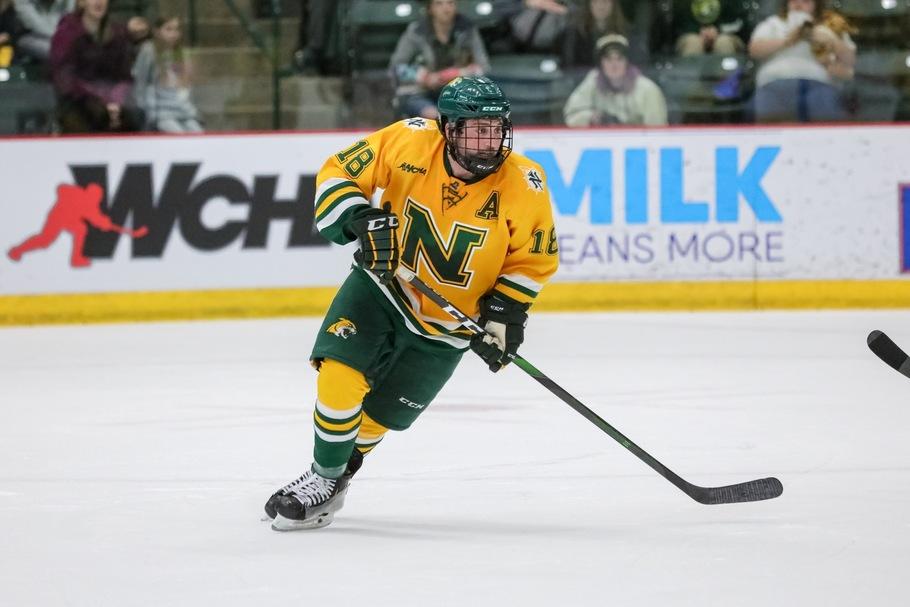 BACK AT THE BERRY—Senior forward Joseph Nardi scores the extra point-clinching goal, and the ‘Cats win on Saturday night in the second game of the doubleheader. NMU has played six of its eight games in the month of January on the road. The Wildcats are now in third place in the standings, and are looking to catch Bemidji State for second place. Ferris State is up next, and the Wildcats are back in home action. Puck drop of the first game is at 7:07 p.m. on Friday, Jan. 31. Photo courtesy of NMU Athletics.

The NMU Men’s Hockey team made the long trek of 3,275.2 miles up to Fairbanks, Alaska and won one of two thrilling games against the University of Alaska-Fairbanks (UAF) Nanooks in Western Collegiate Hockey Association (WCHA) play.

In the first game on Friday, Jan. 24, the two teams tied 4-4, but the Wildcats got the extra point with a goal. The ‘Cats got a big road win in the second game with a 4-2 victory on Saturday, Jan. 25, giving NMU five of six points on the weekend. In the month of January, Northern has played on the road in six of its eight games that included trips to Ohio, New York and now Alaska. After finally returning home to play, Head Coach Grant Potulny is hitting the reset button.

“It’s a tough trip [to Alaska] in its own right, but you rewind a little bit,” Potulny said. “You’re at Bowling Green, then you’re home, then you’re at Cornell and then you’re at Alaska. With the travel schedule, practices have not been easy to come by.”

Friday’s game featured an electric performance in the first period by both squads, and the score was tied 3-3 at the intermission. All of NMU’s three goals were short-handed, and they came from the sticks of sophomore forward Griffin Loughran, senior forward Luke Voltin and freshman defenseman Hank Sorensen.

Senior defenseman Phil Beaulieu put the Wildcats up 4-3 in the second period, but the Nanooks answered back in the third to tie at 4-4. Neither team could score in the five-minute overtime period, and the game ended in a tie. After overtime, the teams played 3-on-3 to determine who would get an extra point in the WCHA standings. Senior forward Joseph Nardi scored for NMU in the untimed period, giving the Wildcats two points. Regardless of getting the second point, Friday night’s effort left Potulny a bit urked about his team’s performance.

“I thought Friday we played okay, but made plays and executed when we had to,” Potulny said. “It [power play and penalty kill] cost us the game on Friday, we should’ve won the game but they scored two power play goals and we scored zero. At some point, and it might be this weekend, players just aren’t going to play.”

On Saturday, the Wildcats played a much cleaner game, and picked up a 4-2 win. Senior forward Darien Craighead scored the game’s opening goal for NMU, and the ‘Cats took an early 1-0 lead. UAF tied it up at 1-1 before Craighead scored his second goal of the game in the second period, but the Nanooks got the score even once again at 2-2. NMU dominated the third period, outscoring UAF 2-0. Freshman forward AJ Vanderbeck scored the game-winning goal with eight minutes left to give the Wildcats the lead for good, and Loughran punched home an empty-net goal for good measure.

Vanderbeck also had two assists on the night, and his efforts on the weekend earned him WCHA Rookie of the Week. The weekly accolades continued for Northern, as Craighead was named WCHA Forward of the Week for his two-goal performance in the second game, and two assists in the first game. NMU now sits in third place in the conference with 38 points, seven behind second place Bemidji State.

“Saturday, I thought was one of our best games of the year. It’s a 5 p.m. start, long travel, all kinds of things going against you,” Potulny said. “To when the game started, I was looking over my shoulder the whole time because the puck was on their end, and that’s a good feeling for a coach.”

Another week of WCHA hockey means another crucial series for the Wildcats this weekend, as the Ferris State University (FSU) Bulldogs come to the Berry Events Center on Friday, Jan. 31, and Saturday, Feb. 1. FSU is ninth out of 10 teams in the WCHA with a conference record of 5-13-2. However, records can be deceiving, as the Bulldogs upset Michigan Tech last weekend up in Houghton.

“They [Ferris State] outshot Tech on Friday, and beat them on Saturday, you don’t talk a lot about standings until this part of the year, but we’re in a position where we got two games in hand on the league,” Potulny said. “You’re chasing Bemidji, they’re up on you if you win your games by one point. We have to find a way.”

NMU swept the Bulldogs in the first two match-ups between these two teams in October, when the Wildcats won two high-scoring affairs, 4-3 and 6-4. Those were road games for NMU, but now it must protect home ice. Potulny said that he is expecting to get two wins with six total points against FSU not because of the Bulldogs’ misfortunates, but that the ‘Cats are playing inside its own building.

“[I expect to win]100%, we’re at home, we’ve been playing better at home then we were to start the year, but for two years we were almost unbeatable here,” Potulny said. “If you want to finish where you want to finish, you have to win your games.”

The Wildcats held its position in the USCHO polls at No. 15, and are now ranked in the pairwise. 16 teams make the NCAA Tournament in March, and when Potulny sees his team ranked in the top 16 as of now, it’s a sign of where the ‘Cats are trying to go.

“We have a month and a half left of season to solidify that position, but it kind of goes hand and hand,” Potulny said. ‘If you finish second in this league with what we did outside of the league, I think you put yourself in a position that if you have some success in the playoffs, then you can be a team that’s right there in the end.”