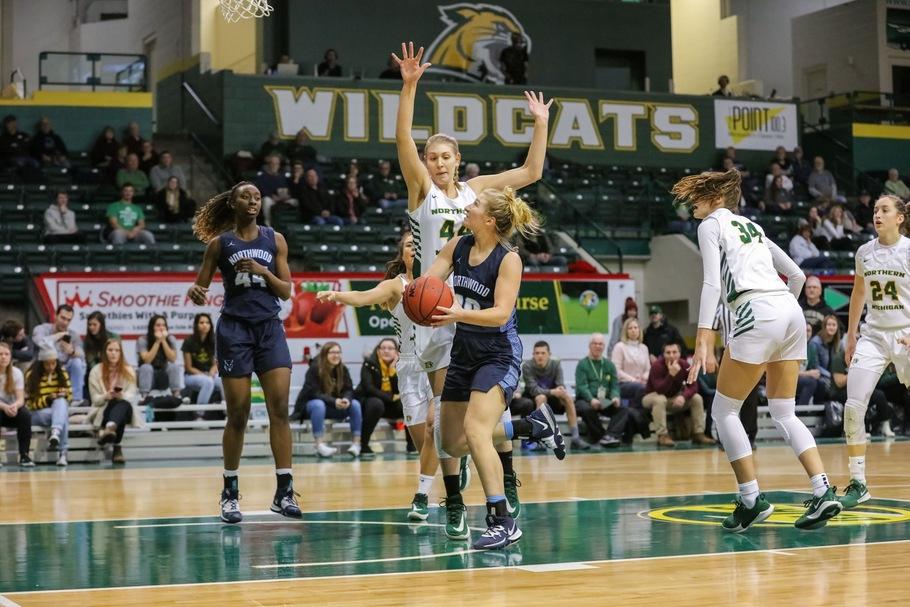 BATTLING THE INJURY BUG—Senior forward Jessica Schultz has been carrying the offense with so many girls affected by injury. Photo courtesy of NMU Athletics

“I mean all in all, we were happy as we can be with the weekend, obviously we would’ve liked to get the sweep,” Assistant Coach Chloe Tompkins said. “We were really looking for the sweep, but with just how injured and sick we are right now, the girls played really hard.”

The Wildcats are now 10-11 (7-6 GLIAC) on the season, and have five of its final seven regular season games at home to end the year. In NMU’s first game of the weekend, it was the polar opposite of a traditional Wildcat performance in a 71-66 win over SVSU on Thursday, Jan. 30. It was normally a slow-paced, first to score 50 points game for the ‘Cats, but the SVSU game was full of offensive fireworks in the second half.

The first half of Thursday’s game started off slow for both squads, and NMU trailed the Cardinals 26-25 at halftime. Just a few minutes into the game, injuries struck again as senior forward Erin Honkala went down. Honkala finished the game with two points in six minutes, and couldn’t return.

The Wildcats responded in the second half, outscoring SVSU 25-13 in the third quarter to take a 50-39 lead. Senior forward Jessica Schultz took over the game, scoring 19 of her career-high 26 points in the second half. The Cardinals battled back in the fourth quarter, outscoring the ‘Cats 27-21, but it wasn’t enough. NMU put together its most consistent offensive showing of the season, and picked up a 71-66 road win. Eight players scored for the Wildcats, including Schultz’s 26 points, and sophomore Liz Lutz finished with 13 points and three 3-pointers.

NMU had a quick turn for Saturday’s game against the NU Timberwolves. This game was what the Wildcats were accustomed to in a low-scoring affair. The first half was similar to the first game of the weekend, and the ‘Cats trailed 24-23 going into the halftime locker room. The third quarter was a dream for NMU against SVSU, but was a back-breaking nightmare against NU. The Timberwolves outscored the Wildcats 16-7 in the quarter, en route to pulling away for a 48-40 victory. Excluding the third quarter, NMU outscored NU 33-32 in the remaining three periods. Schultz put together another impressive outing with 20 points and 14 rebounds, the senior has been on a tear as of late.

“As a senior we need her
[Schultz], especially to really put
some of us on the scoring end on
our back,” Tompkins said. “And
she’s delivered every single night
for us, so that’s huge.”

Sophomore forwards Elena Alaix and Emily Mueller both scored six points to try and make up for losing Honkala on Saturday. Honkala is irreplaceable however, and her injury is a big blow for NMU. It’s just another addition to the lengthy list for this squad, but the ‘Cats are battling through.

“We’re just rolling with what we got and making the best out of it, the girls are playing really well defensively, which is what we hold our hat on,” Tompkins said. “So if we can hold teams in the 40s like we did on Saturday, we just have to figure out a couple more places where we can score.”

After playing six of its last eight games on the road, the Wildcats return home to play at the Berry Events Center. NMU faces off with University of Wisconsin- Parkside (UWP) on Thursday, Feb. 6, and ends the weekend with a clash with Purdue-Northwest University (PNWU) on Saturday, Feb. 8. Tompkins said that the team is hoping to get Honkala and freshman guard Makaylee Kuhn back from injury for those two games, but both are questionable after having to go through MRIs this week.

UWP (12-9, 9-4 GLIAC) is tied for first place in the North Division standings. If the Wildcats have any chance of winning or earning a share of the division this season, they’ll need to beat the Rangers. Both teams previously played on Saturday, Jan. 11 in Kenosha, Wisconsin, and UWP won 58-55 on a buzzer beating shot after the Wildcats led for most of the game. Alyssa Nelson led the Rangers with 22 points, including going 5-5 from outside the arch. NMU’s defense has been mostly stout this season, and that will have to continue in order to stop Nelson and company.

“It’ll be a tough match-up,
we’re a tough match-up for each
other,” Tompkins said. “They
run a pretty difficult offensive
set, but right now working on
our defensive plan is our number
one priority.”

The ‘Cats will then shift its focus to Saturday’s match-up with PNWU (6-15, 5-8 GLIAC) , who NMU beat pretty handily 56-34 on Thursday, Jan. 9. Despite the result of the last game between these two teams, this game is just as important for the Wildcats’ division title dreams.

“It’s going to be a big game for us as well, they have two really strong freshman guards in [Savaya] Brockington and [Anjel] Galbraith, who’re really tough to defend,” Tompkins said. “They have a lot of scoring opportunities in the different ways they score around the basket, but our length really bothered them last time we played them. So our ability and our length along the post and guards will give them some issues.”

In the last match-up, the Wildcats limited the freshman guard duo of Brockington and Galbraith to a combined 12 points, and 2-23 shooting from the field. If NMU can replicate that in Saturday’s match-up, a win should be in sight.

The ‘Cats are in action back at home against the UWP Rangers at 7:30 p.m. on Thursday, Feb. 6. The second day of action on the weekend will take place on Saturday, Feb. 8 when the Wildcats host the PNWU Pride.