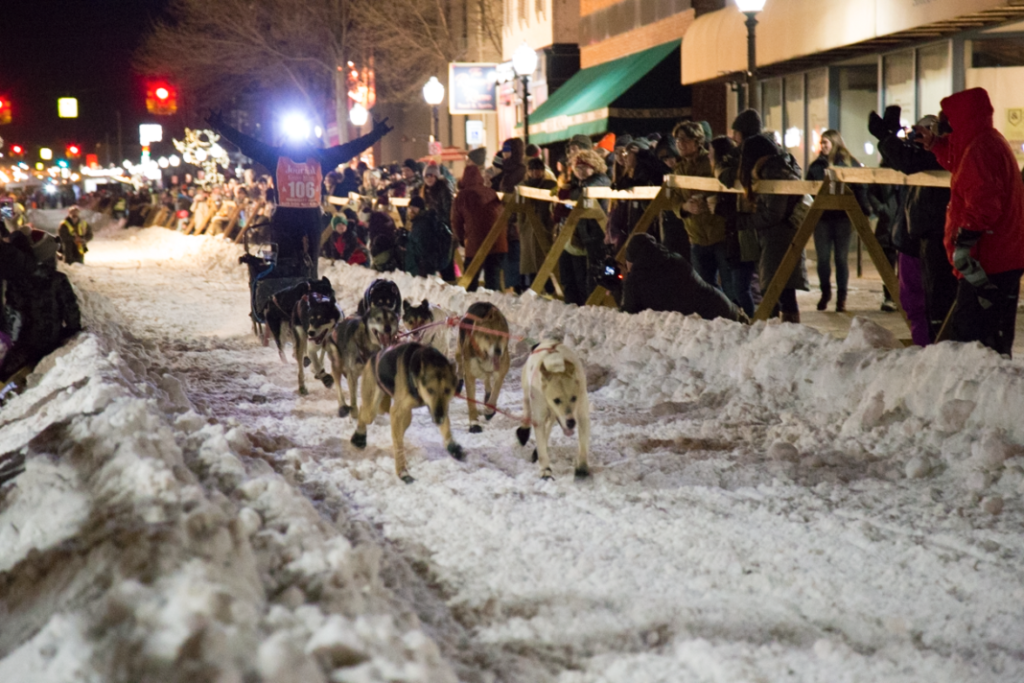 OFF THEY GO The annual sled dog races will span large tracts of the wintery Upper Peninsula and constitute both a challenge and an exhilarating opportunity for the mushers and their athletic dogs. The dogs train to run many miles during these exciting events, which attract large crowds from the Marquette community and beyond.

The harsh bark of dogs rings through the crowds of hundreds of people pushing up against the street barricades, where practically the whole city and more gathers at the race starting point. Snow flies in the air as the sled dogs resist against their mushers’ reins.

The opening night of the UP200 sled dog races will commence at 7 p.m. in downtown Marquette on Friday, Feb. 14. For those interested in viewing some of the races, the UP200 and Midnight Run teams leave every two minutes.

Spectators from all around can come see the sled dog teams begin their journey across the UP at the starting point on the corner of Washington and Fourth Street in front of The Mining Journal.

The Upper Peninsula Sled Dog Association (UPSDA) has organized races since 1990, marking their 30th anniversary this year. Current UPSDA President Darlene Walch has been involved with the races since the early 90s. She later began a kennel and raced her own sled dogs.

“I went to the first race as a spectator and was enthralled. I always loved dogs and thought the sled dogs were spectacular,” Walch said.

After participating in the Jack Pine 30 and the Midnight Run several times, she retired and took a second run at being on the UPSDA board, because becoming a UPSDA member is a good way to support the races, she said.

Walch explained the qualifications needed to enter each of the three races put on by the UPSDA.

“Any musher can enter the Jack Pine 30 or Midnight Run as long as they have suitable northern breed dogs,” Walch said. “Mushers have to have a qualifying race of at least 60 miles to enter the UP200.”

There are 17 12-dog teams entered to run the 230-mile UP200 from Marquette to Grand Marais and back. The 82-mile Midnight Run from Marquette to Chatham and back consists of 22 8-dog teams. On Saturday, Feb. 15 at 10 a.m., 14 6-dog teams will race an approximately 23-mile loop beginning and ending at the First Baptist Church in Gwinn.

Mushers competing in the UP200 leave first on opening night. Then the first musher to leave for the Midnight Run will leave 30 minutes after the last UP200 musher, but the first Midnight Run team will not leave before 8:30 p.m.

Each year there are about 800 to 900 volunteers from far and wide that come to assist with the races. Some volunteers hail from NMU. Many clubs, organizations and faculty members on campus offer their time to act as crowd control, timekeepers and road crossing assistants along the trails.

“Every year people come from out of the area. For some it is a one-time thing on a bucket list,” Walch said. “Volunteers come from downstate and neighboring states to help. Some have been coming for 20 or more years.”

Spectators are also allowed to go along the lakeshore out through Harvey to see the teams. There are viewing areas in Alger County and Grand Marais that can be found on the up200.org website under Race Info and Viewing Areas. Since the race is a bit shorter, spectators can generally see the beginning and the end of the Jack Pine 30 within a few hours in Gwinn.