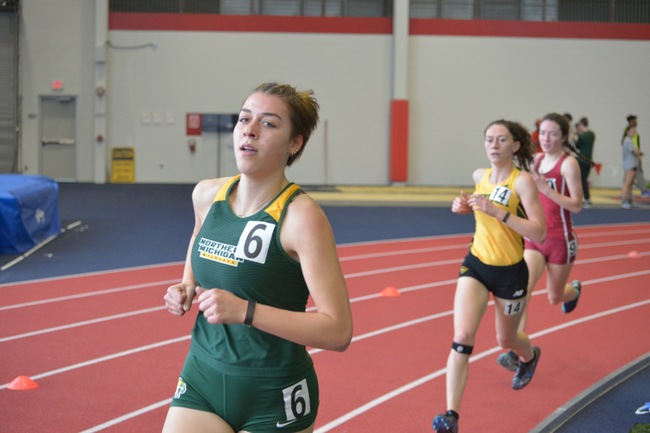 BIG TIME AT THE BIG DAWG—Sophomore Anna Kelley runs for the Wildcats with competitors right behind, and everyone was behind the Wildcats at the Big Dawg Invitational this past weekend. Photo courtesy of NMU Athletics.

The successful season for the NMU Women’s Track and Field team continued as the Wildcats won the Big Dawg Invitational held at the University of Wisconsin-Stevens Point (UWSP).

The Wildcat runners had a lot of success with many top place finishes, and they started the invite strong in the 60m dash. Sophomore Ninti Little took first place in the event with a time of 7.93 seconds, and finishing just behind her in second place was junior Lauren Alarie in 7.96 seconds. In the 60m hurdles, junior Nina Augsten finished in second place, crossing the line in 9.30 seconds.

Another second place finish for the Wildcats was senior Paige DuBois in the 800m race with a time of 2:18.97. In the 3k race, junior Elise Longley took home third place in 11:04.73. In the 5k race, the ‘Cats swept the competition, taking home first through third place. Senior Hanna Torvi and freshmen Madison Malon and Megan Langworthy took over the podium in the 5k with times of 18:28.38, 18:28.56 and 19:15.31 respectively. The 4x400m relay team of senior Megan Martin, junior Dunja Drobac, sophomore Hannah Jones and freshman Morgan Lyon took home third place with a time of 4:11.90 to round things out for NMU.

The ‘Cats roared up the leaderboard for a total of 140 points, edging out University of Wisconsin-Oshkosh by 1.5 points for the victory.

“We had some great, competitive races/events with the athletes really competing well and giving their best performances.” Head Coach Jenny Ryan said.

This weekend, Northern Michigan travels to Grand Valley State University (GVSU) to compete in the GVSU Big Meet on Friday, Feb. 14 and Saturday, Feb. 15. As the season begins to wind down, any exposure for this Wildcat team is a good thing.

“Our goal is to gain high level competition experience for the GLIAC championships, as well as gain some experience against some of the best athletes in the country.” Ryan said

Over 1,600 athletes from DI, DII and DIII teams will be competing at the meet, and there is confidence that the team as a whole stacks up to the competition this week.

“It will be very competitive, however our team is very solid all around, so we will do well as a team,” Ryan said.

The Big Meet has a different format than most meets, as Friday is the elite meet where the Wildcats have eight athletes competing. Those runners include Augsten, Alairie, Longley, DuBois, Drobac, Torvi, Malon and senior Katelyn Smith. On Saturday, the rest of the ‘Cats will compete.

“They (the eight athletes competing Friday) will get some good high level experience.” Ryan said. “Saturday’s event will also be very competitive, I see us doing respectable in all events.”

For this week’s meet, the preparation is important to Ryan for her team’s performance.

“We continue to train well and prepare and practice all parts of our events.” Ryan said “We also do some tapering with their training so they are somewhat rested, and ready to go.”

The Big Meet at GVSU will take place on Friday, Feb. 14 and Saturday, Feb. 15 in Allendale, Michigan.