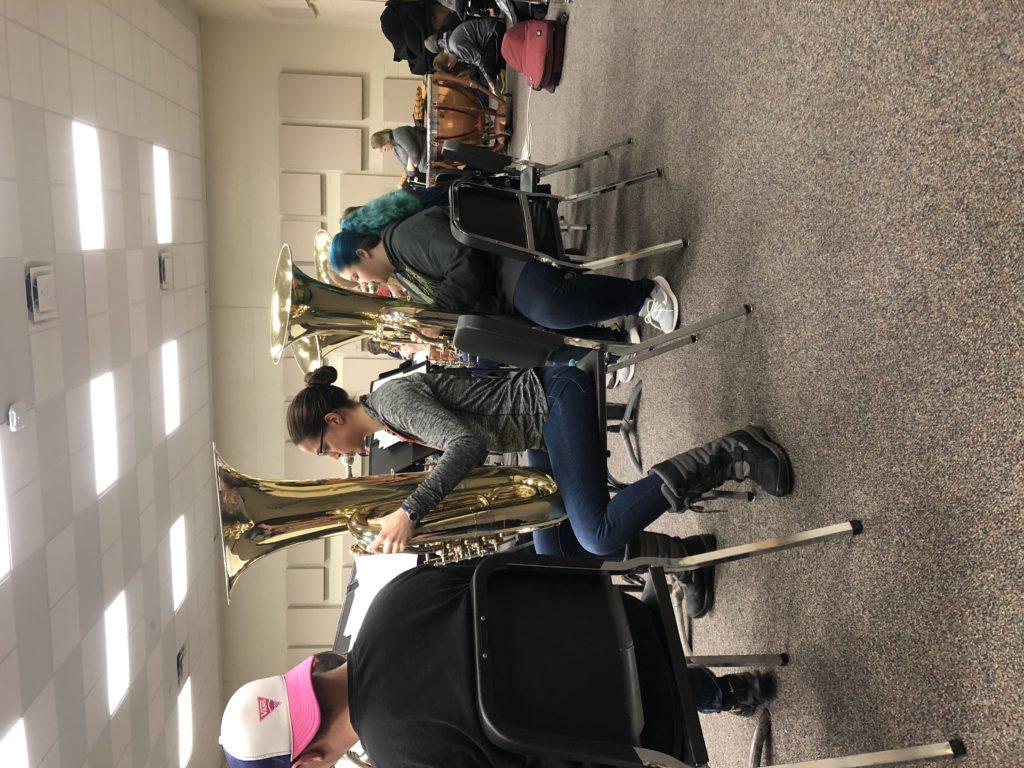 Maggie Duly/NW TAPPING ALONG—Junior biology major Madeline McDonald plays on que during one of the last rehearsals before the Symphonic Band and Wind Ensemble Concert on Monday, Feb. 24. The band practices for the concert in the Thomas Fine Arts building on Wednesday, Feb. 19.

While some students are tuning their instruments, others are already buried in their sheet music—eyes dancing across the pages filled with notes as their fingers work at their instruments. The bright noises of winds and low hums of brass fill the room as students prepare for the upcoming concert.

The Symphonic Band and Wind Ensemble Concert will begin at 7:30 p.m. on Monday, Feb. 24 in Reynolds Recital Hall. The concert will feature pieces from Ralph Vaughan Williams, Eric Whitacre, Rossano Galante and more.

Stephen Grugin Ph.D, director of bands and professor of low brass, has been working with the symphonic band and wind ensemble for their first concert since January. Because marching band takes place in the fall, both bands have only had since the start of the winter semester to prepare for the concert.

“Both of these concert bands are classes…the majority of the class work is done in rehearsals,” Grugin said. “The concert is an important part and definitely a goal we are working for, but it’s not the only thing. The rehearsals can be intense and we try to get a lot done in a short amount of time so we work efficiently.”

Symphonic band meets three times a week while the Wind Ensemble meets twice a week, giving both bands only a fraction of time to practice together—holding all students responsible to make sure they practice outside of rehearsals as well.

Both bands are made up of music and non-music majors. The symphonic band, which is the larger of the two, has around 70 people while the wind ensemble is made up of around 45 students.

“I am proud of the fact that we get to offer these types of experiences for our non-music majors and I really believe that participating in music and college ensemble is really a bridge between what they did in high school and what they might do as future adult musicians,” Grugin said.

He hopes students will go through the programs at NMU and continue their love for music, whether it be participating in the bands or going to concerts.

“It’s part of a process in music education that we want to develop a lifelong interest in music,” Grugin said. “That’s what students playing in the bands is all about for me.”

The Symphonic Band and Wind Ensemble Concert is free for everyone and Grugin hopes to see as many as possible show up to support the bands.

For more information about NMU’s bands, visit the Department of Music home page at nmu.edu/music/home-page.