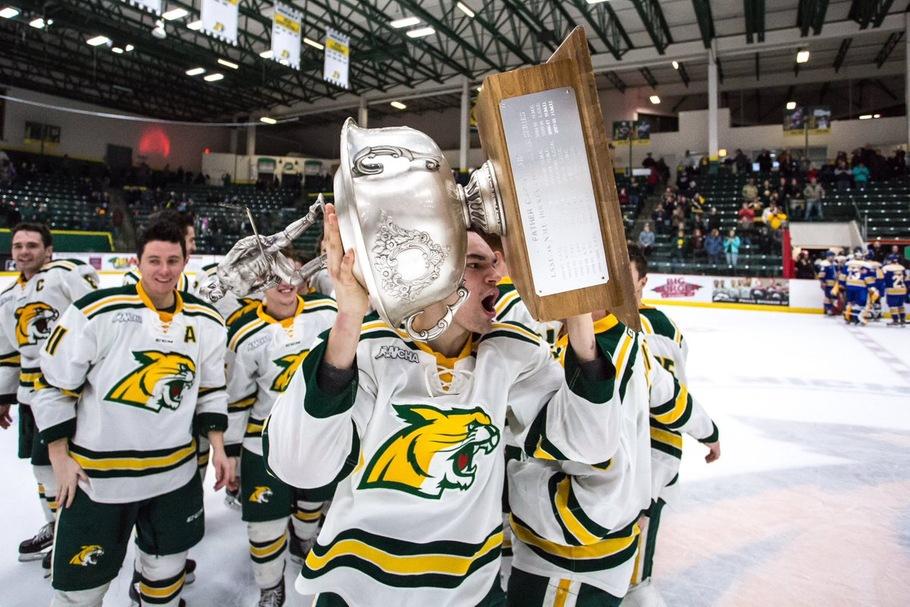 TROPHY GAME—Last year, the Wildcats won the Cappo Cup with a series victory over LSSU, and the trophy is back on the line this weekend in Sault Ste. Marie. Photo courtesy of NMU Athletics.

It was a tough pill to swallow for the NMU Hockey team this past weekend, as it was swept on its home ice by the Bemidji State University (BSU) Beavers.

The Wildcats (16-12-4, 14-9-1 WCHA) were only seven points back of BSU for second place in the WCHA standings going to the series, but now are 13 points back of second after losing 5-0 on Friday, Feb. 14, and 5-1 on Saturday, Feb. 15. The ‘Cats are only one point above Alaska-Fairbanks for third, and three points above Michigan Tech, who is in fourth.

NMU went from battling neck and neck for second place and hosting two rounds of the WCHA Tournament to now barely hanging on for a first round home series. Despite the scores being similar in both games, Head Coach Grant Potulny likes the effort that his team showed in Saturday’s contest.

“I can coach that [Saturday’s performance], you can fix things, you can coach things, what you can’t coach is effort. After Friday, did the plan work? I don’t know, we didn’t give ourselves a chance,” Potulny said. “I can work with what they gave me on Saturday.”

Northern is now on a four-game losing streak after losing to the top two teams in the conference in BSU and Minnesota State-Mankato. Potulny said this slump is similar to one that the team suffered in late November. The ‘Cats got out of it, and went on to play good hockey into the new year. To get out of this slump, Potulny says that they need to do what was done last time.

NMU has a prime opportunity this upcoming weekend to clinch home ice advantage in the first round of the WCHA Tournament with a sweep of the Lake Superior State University (LSSU) Lakers. LSSU (10-20-4, 8-12-4 WCHA) is in seventh place in the WCHA standings, and barely hanging on to a playoff spot. Even with a lowly record, Potulny is expecting nothing but a battle.

“I am [expecting a tough series], we’re playing for a trophy (Cappo Cup). The trophy’s out of the locker room right now, because we don’t own it, it’s up for grabs this week,” Potulny said. “If you look at when the year started, they were picked to finish fifth (WCHA Preseason Coaches Poll), and for whatever reason it didn’t go well for them. But watching them on video, you just have a hard time kind of understanding why they were struggling so much.”

The Lakers however, have begun to turn the tide on its season, losing in only two of its past eight games. LSSU is playing well leading up to the series with the Wildcats, and several eye-popping stats about this team stand out to Potulny.

“Their goalie (junior Mareks Mitens) is playing fantastic, they’re averaging 30 shots a night, their penalty kill is 94%,” Potulny said. “Those are facts, stats are facts, they’re not my opinion. Everything tells you that they’re playing their best hockey of the year, they have a chance to move in the standings too.”

NMU started the season averaging over five goals a game, but Potulny knew it wasn’t sustainable. The ‘Cats are now averaging around 3.25 goals per game according to Potulny, which he said is an incredible statistic. Offense isn’t the problem, lately special teams and keeping the puck out of the net have been hurting them, Potulny said.

The Wildcats look to get out of its current slide this weekend in Sault Ste. Marie on Friday, Feb. 21 and Saturday, Feb. 22, when they take on the LSSU Lakers with the Cappo Cup on the line. Puck drop is scheduled for 7 p.m. for Friday’s game.