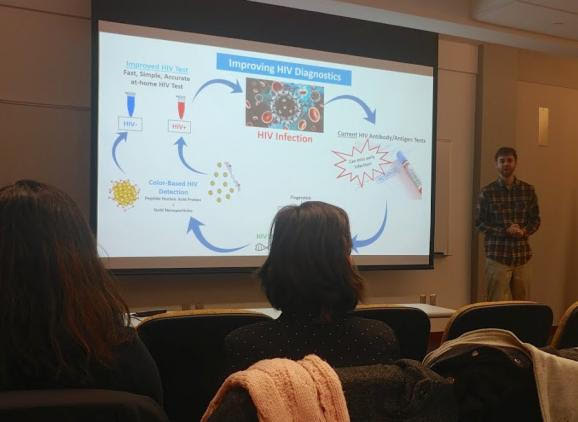 NMU students will compete in the third annual Three Minute Thesis Competition from 3 to 5 p.m on Feb. 26 in the Mead Auditorium for recognition, cash prizes and a chance to compete in the next stage of the event, the Midwest Association of Graduate Schools (MAGS) competition.

Each candidate has three minutes to present an original thesis research of their own, with one PowerPoint slide, no animations, moving parts, costumes or dance numbers to aid their presentation.

“You have three minutes to talk about all of the research that you wish you could tell somebody about. Encapsulating all of the cool stuff that you did during your degree here, and it’s one of the only times that you will get a large group of people watching you do that,” said Janelle Taylor, coordinator of graduate students and research affairs.

This competition is a great opportunity for students to be creative and gain experience presenting ideas in front of an audience and a panel of judges consisting of interested members from the community, Taylor said.

There will also be a third category called people’s choice, where the audience members vote on the presentation of their personal favorite.

“You can be engaging and funny, and even if you don’t tick all of the boxes, if the audience votes for you, you still kind of win,” Taylor said. “It’s a weird mix. Obviously the research is kind of intense, something they’ve been working on for a long time, but at the same time it’s supposed to be fun, it’s supposed to be something you can enjoy.”

The 1st place graduate student winner will move on to compete in the Midwest Association of Graduate Schools competition. There, they will compete against students from Michigan, Wisconsin, Illinois, Iowa, Missouri and the entire midwest region—encountering students from larger schools with greater resources than NMU. Then, the winner will move to nationals.

“It’s actually been great for schools like NMU. We’re competing, when we go to the midwest regionals, we’re competing against UofM and University of Minnesota and Western. They have a lot more resources than we do, but our students still hold up to it because the rules are pretty basic and you have to follow these same things,” Taylor said. “So it just becomes about the research, and then ours does really well.”

Students must be actively enrolled in a graduate program or the McNair Scholars program in order to participate, though McNair students are not eligible to compete at the MAGS contest. Students can present their research from any department, and can even present their capstone projects, as long as what they present is their own original research.

The Three Minute Thesis Competition was started in 2008 at the University of Queensland in Australia for Ph.D. and Masters level students. Today, the competition is widely recognized for the reason that, each year, about 200 universities in 85 different countries participate.

Everyone is invited, including students, staff and community members. Community members who do not often have the opportunity to hear about the research conducted within the university often attend and are surprised, Taylor explained.

“Every time they come away really impressed that we have students at these ages doing these things, that they’re talking about some pretty intense stuff. Quite honestly it’s just fun,” Taylor said.