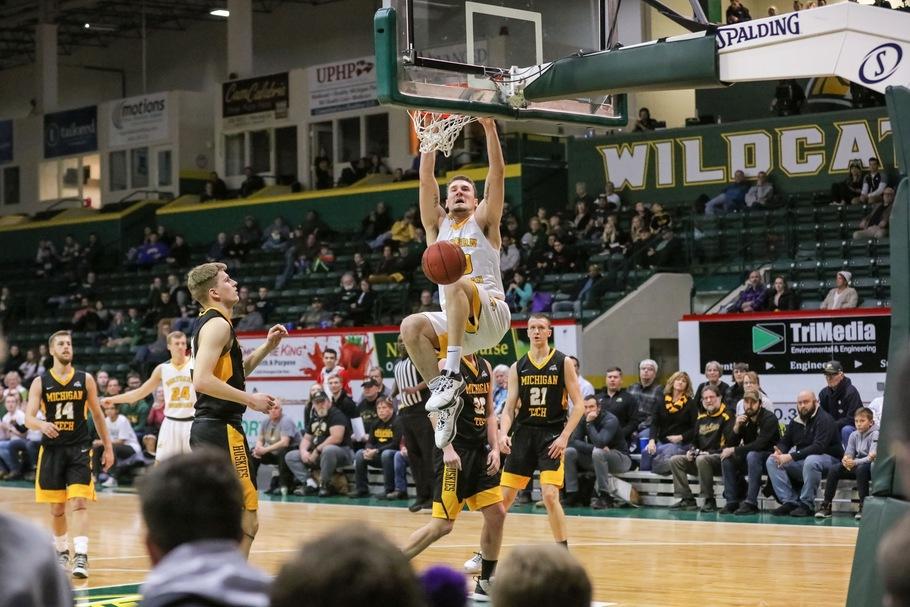 PRIME POSITION—The Wildcats return everyone but three players from this year’s team, including redshirt freshman center Ben Wolf. NMU looks to have more success in the 2021 postseason. Photo courtesy of NMU Athletics.

The season full of ups and downs has come to an end for the NMU Men’s Basketball team after bowing out of the GLIAC Tournament Semifinals in a 64-53 losing effort to Northwood University (NU) on Saturday, March 9.

The Wildcats finished the year with a 13-17 record in Head Coach Matt Majkrzak’s first season, and a team that was projected to finish last in the 12-team GLIAC found a way to go 9-11 in conference play and advance to the GLIAC Tournament Semifinals for the second year in a row. Majkrzak gives credit to this year’s seniors and the previous coaching staff to have brought the ‘Cats to a level where overachieving with lesser talent is possible, he said.

“I think we had a good year, but I think what it really says a lot about is the job that those seniors had done and the job that Bill Sall had done previously where we maybe didn’t have as much talent,” Majkrzak said. “But it was clear that the program was in good enough shape that we could overcome maybe not having as much talent as other teams.”

NMU had made its name this season on picking up road wins over the best teams in the conference, but the victory over FSU could be the best for the ‘Cats this season, especially with the circumstances.

“I think the Ferris win was a lot of fun, especially without Myles (Howard). I thought it would be really, really tough without Myles, and for us to get that win was awesome, it’s a great sign that some of the younger kids played well heading into next year,” Majkrzak said. “It was a great opportunity for us to get to that final four, where you have the banquet and you really feel like you’re playing in a conference tournament, and not just another game.”

Howard, a senior center and team captain, was named to the All-GLIAC First Team last week. His presence has been crucial for the Wildcats, but others stepped up in his absence. In a balanced scoring effort, redshirt freshman center Ben Wolf led the team with 22 points and 11 rebounds, and right behind him was senior guard Sam Taylor who added 21. A third double digit scorer for NMU was redshirt sophomore forward Dolapo Olayinka, he had 14.

The Wildcats then traveled to Allendale, Michigan for the GLIAC Tournament Semifinals, hosted by Grand Valley State University on Saturday, March 7. The eighth seeded NMU took on fourth seeded NU, and Northern led 34-32 in a close game heading into halftime. In the second half, the ‘Cats ran out of gas and only scored 19 points in an eventual 11-point loss. Two similar players, Olayinka and Wolf, led the team in scoring with 21 and 14 points respectively. NMU went 5-27 from the 3-point line, good for 18.5%, and was outrebounded 49-30 by the Timberwolves.

“I thought we played pretty well against Northwood all things considered, we knew rebounding would be a little bit of an issue with losing your two best rebounders (Howard and Troy Summers). And we still held them in check pretty well, we just couldn’t make enough shots,” Majkrzak said.

There was a formula that needed to go right most nights for Northern to pick up victories, and missed shots like the Wildcats had didn’t equate to wins.

“At the end of the day, that’s what kind of happened to us in losses, we didn’t have a secondary way to score the ball at a high level besides making 3(point shots),” Majkrzak said. “In that we didn’t have great post players, great drivers, so we kind of were stuck being one dimensional this year, and when that one dimension didn’t go well, we struggled to win games.”

Majkrzak gave credit to his three seniors Taylor, Howard and guard Marcus Matelski for the Wildcats having a better year than people thought. He also thought that the seniors’ experience in the conference gave them an extra boost also.

“We’re going to miss those three a lot. I think next year’s going to be a whole new season, but this year really felt like (it was) more so their (the seniors) team than maybe any other team I’ve ever been involved with,” Majkrzak said. “In a lot of ways, their leadership is what kind of kept us afloat.”

Improving from the being eighth seed and winning one game in the GLIAC Tournament is the task at hand for Majkrzak, as this is what he said in the preseason. Now going into his second season in charge, the expectation is now there.