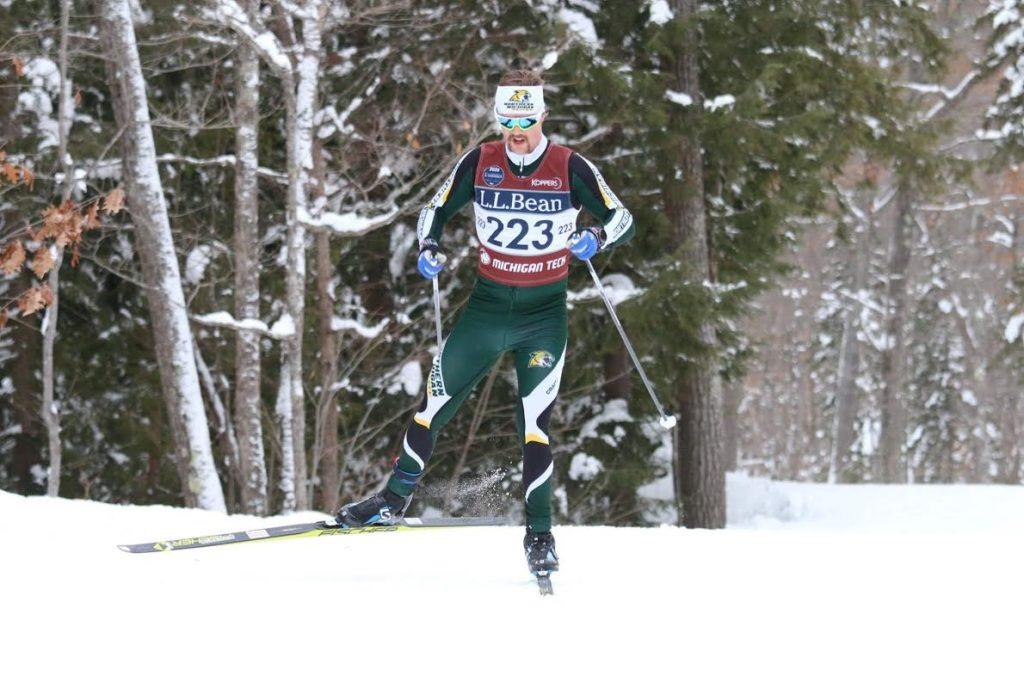 ANTICLIMATIC ENDING­­­— Junior Kjetil Bannerud speeds through the slopes during action this season. Head Coach Sten Fjeldheim said it was an anticlimatic ending to the season, and that ‘s exactly what it was. Photo courtesy of Kjetil Baanerud

When talking about the disappointment after the NCAA Division I national skiing championships were shut down after only one day, Head Coach Sten Fjeldheim said it’s crazy times right now. That’s an accurate depiction of how the COVID-19 outbreak has affected not only athletics, but the entire globe.

The Wildcats traveled to Bozeman, Montana for the two-day event beginning on Thursday, March 12, vying for a chance to claim more individual national championships. NMU got only one day of nationals in, but both men and women had success.

In the men’s 10k, junior Kjetil Bannerud paced the ‘Cats with a 20th place finish in a time of 25:18.7. Right behind him were teammates senior Mathias Rolid and junior Daniel Streinz, finishing in 21st and 29th places respectively.

On the women’s side in the 5k, freshman Molly Miller finished in 15th place with a time of 14:34.3. Freshman Malin Boerjesoe was up next for the Wildcats with a time of 15:28.1 and placed 33rd. Sophomore Nadine Matter rounded out the action for NMU with a 36th place time of 15:33.6.

Despite having three skiers on both teams find success, day one of the championships didn’t meet the expectations of the Wildcats.

Baanerud and his teammates were looking to receive All-American honors, and the athletes came up short of their goals. For NMU, it was simply a bad day to have a bad day.

“As a team, we did a little more poorly than we usually do. I had a big goal of being an All-American, being top 10, and I knew that I was in good enough shape to do that,” Bannerud said. “But it was one of those days where I think that it didn’t work out for me like I was hoping for.”

Even after a subpar first day, the ‘Cats team was looking forward to day two. However, NMU didn’t get that opportunity.

“We didn’t have our best day. It wasn’t what we wanted to happen on day one. We thought we had the potential to have a winner,” Fjeldheim said. “That didn’t happen, but we felt like our rug got pulled from underneath us. We couldn’t come back for another race to get fired up for redemption against some better competition and prove ourselves to everybody that we’re better than what we had [on day one].”

The necessity of having the championships canceled was understood by the team, however that didn’t mean that it couldn’t be disappointed. When it comes to the championships ending at a bad time, Coach Fjeldheim wasn’t the only one that felt that way.

“It was of course a big bummer, we were really excited after race two to have another race where we could get some revenge because we didn’t feel like we were able to get out our potential in the first race,” Baanerud said. “And having a season be interrupted by something or ending without much notice is always tough.”

The team was speechless for a while until it realized what happened, Baanerud said, even after hearing rumors of cancellation in the early morning of the first day.

“We kind of heard rumors of what was going to happen, we knew the [COVID-19] situation in general and how it was becoming a major problem,” Baanerud said. “We thought since we were already there that we’d be able to finish our NCAAs, so we were kind of prepared for it, but at the same time it was still kind of a shock.”

This situation had made the Wildcats feel a  wide range of emotion from sadness to shock, and that can create confusion. Mentally, the athletes had trouble focusing on the upcoming races, and they really only had an hour to wrap their heads around it, Fjeldheim said.

“Everybody was pretty disappointed, and it was a very confusing time because we heard rumors that morning before the race, and that kind of messes with the athletes a bit,” Fjeldheim said.

At this time at the end of the season, Fjeldheim and his staff would usually begin individual season evaluations with the athletes, but COVID-19 is once again in the way. The skiing coaches can’t meet with any athletes during this time, and many can’t even train because they went home once the season ended. The ones who did stay, however, are trying to get some skiing in.

“Most of the athletes have gone home, but there’s still a few here in town that are taking advantage of the snow,” Fjeldheim said. “I don’t meet with them, but they drive their personal vehicles and go skiing with a teammate or two and they keep the social distance regulated in there.”

One of the many athletes to travel back home was Baanerud, who is from Norway. He said that he has only done a little bit of training lately, due to being cautious after traveling through multiple time zones back home. Being a junior, he’ll have one more chance to compete at nationals, but that won’t give him this year back.

“We were really looking forward to [coming back for the second day], we wanted to show that NMU is the school that’s supposed to be up there fighting for those top five, top 10 spots at the NCAAs,” Baanerud said.