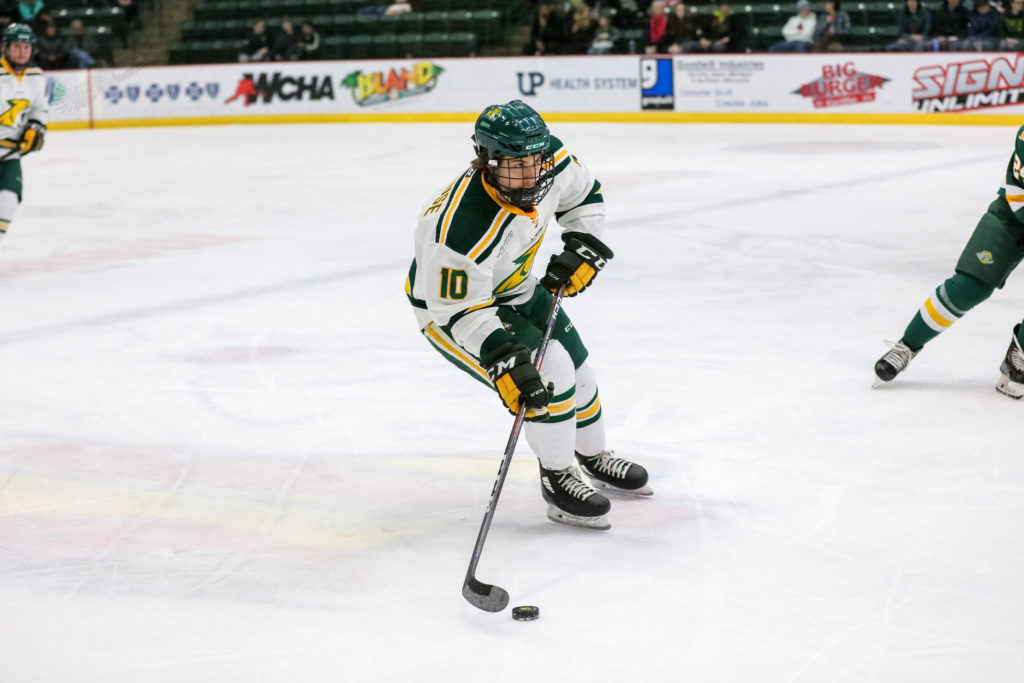 BASEMENT HOCKEY­­­—Junior defenseman Ben Newhouse is usually on the ice at the Berry Events Center, but he has now been reduced to stick handling and other hockey-specific activities in his basement. Photo courtesy of NMU Athletics.

Nothing is normal for anyone right now, and that certainly applies to the current workout routines for NMU athletes.

For some more than others, it’s difficult to replicate a sport in quarantine.

Namely, for Juniors hockey defenseman Ben Newhouse and swimmer Cassandra Clark, the sport of hockey needs a rink, and the sport of swimming needs a pool. Right now what both athletes have in common is that they don’t have their home surface.

“I’ve never went through a period this long without swimming and being in a pool.It’s really strange and I think every swimmer can probably say that,” Clark said. “It’s really weird not being able to swim some laps, even in the off-season we do that just to relax.”

Clark has been forced to readjust her cardio. She watches videos suggested by Swim and Dive Assistant Coach Matt Williams, and she is doing exercises around the house, such as ab workouts and pullups. She also does what is known to swimmers as taper-weight circuits.

“It’s kind of sad, and it’s also kind of difficult to do the cardio that we need to do to stay in shape without a pool,” Clark said. “We’re so used to swimming that we’re not necessarily sweating and feeling hot and nasty when we’re working out. In a pool, it’s a whole new experience.”

Newhouse has used similar tactics as Clark, such as getting outside to ride his bike or go for a run. He also has set up camp in his basement where he watches videos and does workouts that are hosted by the team’s strength coach.

“For the most part, I’ve tried to do something for a couple hours a day. Especially just to move, otherwise you’ll be stuck inside all day which sucks,” Newhouse said. “Trying to go for bike rides, trying to do as much as I can downstairs, or the few days that I was able to go outside and do some workouts. Especially now with snow, it’s a little more difficult for that, but it’s been good so far. It’s making the most out of trying times.”

Newhouse has been in contact via Zoom with his trainer back home in Minnesota, who has been with him for over six years. He might not have a rink in front of him, but Newhouse brought a part of the rink home with him.

“Obviously it’s a difficult thing going on right now, but before everything really got shut down, I was able to grab a few things from the rink’s weight room,” Newhouse said. “I brought those to the house and [I’m] just trying to formulate some sort of workouts downstairs in the basement.”

Newhouse does stick handling in the basement for around 40 minutes per day, and his workouts revolve around being in an athletic position. At first he was just doing enough to stay in shape and not worrying about the hockey aspect as much. However, that changed fast.

“It wasn’t so much seeing hockey-specific stuff, it was more just trying to stay active and I was hopeful at that point it would only be a week,” Newhouse said. “But months down the line that’s certainly not the case.”

This is a different time for swimmers, as they’re trying to figure out a way to release the energy that they have, Clark said. The team is trying to find ways to cope with the extra energy and expend it in a useful way, she added. Most of her teammates are not only trying to maintain exercise, but try to balance school at the same time. Clark said that she takes breaks from her school work to go on a run or get outside.

“I think a lot of the people who I’ve talked to at least, have been doing something,” Clark said. “Some of the people who don’t really feel the need and they’re very centered on school, aren’t taking the time to exercise as much.”

Through all of this, both athletes’ teams have been communicating with each other, and Newhouse said coaches check up on him and others almost every week.He also added that the entire team talks on Zoom, or over video games on Xbox Live. Clark and the swim team have communicated more about workouts, and the group chats have helped the team not only bond, but push each other through this difficult time.

“It’s been pretty good, we have a group chat on WhatsApp, and it’s really good to help us show different people the silly things we’re doing,” Clark said. “Two weeks ago, people were posting workout challenges that they were doing and that they wanted others to do. It’s keeping each other’s morale up, and pushing each other to be better even through the circumstances.”